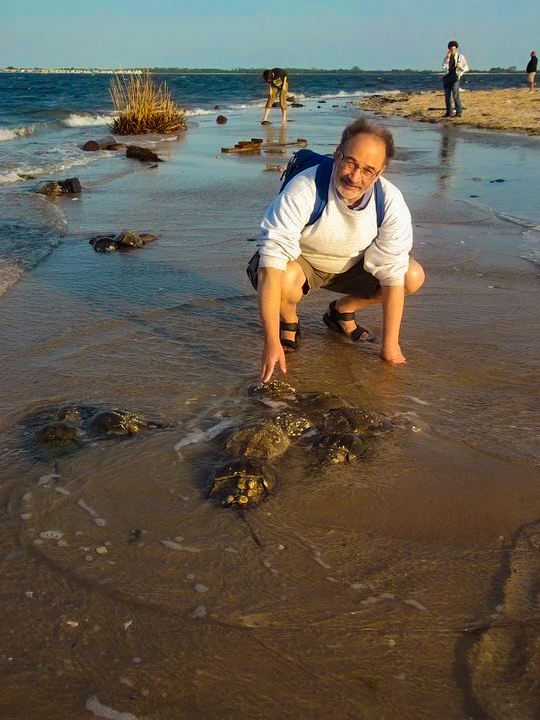 Mark Botton, horseshoe crab expert, stands next to a few of his favorite specimens.

“I was actually kind of scared of them when I was a kid. I used to think the tail was a stinger.”

Fordham biology professor Mark Botton, Ph.D., recalled his earliest memories of the horseshoe crab, a species he has studied for the past 43 years.

In November 2019, Botton’s expertise on the species was acknowledged with one of the highest honors within the science community. Post-doctoral Research Fellow Russell D.C. Bicknell, Ph.D., discovered a new species of horseshoe crab specimen originating from Scotland and named it Albalimulus Bottoni after Botton.

Now forever linked to the animal by name, Botton recalled an experience he had as a student that ultimately led him to dedicate his entire career to studying the species.

While pursuing a doctorate degree in zoology at Rutgers University, Botton sought out field research opportunities in marine labs. He spent the summer of 1977 studying horseshoe crabs at Delaware Bay, New Jersey, a highly frequented breeding habitat for horseshoe crabs at the time.

During Botton’s first week there, famous English broadcaster and natural historian David Attenborough and his film crew were filming BBC’s natural history documentary series “Life on Earth.” They came specifically to document the overabundance of horseshoe crabs spawning on the little-known Jersey beach.

Botton remembered thinking to himself, “Wow, these guys came all the way from England to film this, there must be something kind of remarkable about it.”

After witnessing what he described as “a literal carpeting of the beach with prehistoric-looking critters” and speaking to those on site, he became intrigued and was eager to learn about the scarcely researched species.

That summer, Botton connected with Attenborough’s scientific adviser Carl Schuster, whom Botton referred to as “the godfather of the crab game.” The two of them worked together on a small research project on the crabs, which turned into one of Botton’s first publications. He then went on to complete his thesis on American horseshoe crabs.

Botton explained what makes the 450-million-year-old species so special. “I’ve always been interested in what makes them tick, and how they’ve managed to survive. What is it about their biology, ecology and physiology that they’ve been able to do alright after all these millennia that so many other animals have gone extinct?” he said.

Since that summer in Delaware Bay, these contemplations have kept Botton consistently interested. He has dedicated much of his career to researching the horseshoe crab and their conservation. He was the editor of multiple distinguished publications about the species and currently serves as Co-Chair of the International Union for Conservation’s Horseshoe Crab Specialist Group. His expertise on the species is unmatched in the field.

Unaware of Bicknell’s latest work, Botton found out about his designation when he received an email from Bicknell with a link to the paper in which he established the name of the new species. “I was pretty flabbergasted,” Botton said.

The two had only met once in 2018. Botton and his student worked with Bicknell on a small research project that compared the injuries of fossils to those of contemporary species in Jamaica Bay, New York.

“Among scientists it’s kind of a nerdy honor in a way to have a critter named after you. It makes you feel old, for one thing.” he said with a chuckle. He posted a link to the story on his Facebook page with the caption, “I’m officially an old fossil.”

Royall McMahon Ward, FCLC ’22, conducted research on the crabs in Jamaica Bay this past summer. With Botton’s help, she documented flatworm infestation within the species.

“It is absolutely deserved. No other individual in this world is as active and knowledgeable about horseshoe crabs, no one else could have been given this honor besides him.” McMahon Ward said.

Another student of Botton’s, Kylie Rothwell, FCLC ’20, agreed that he deserved the accolade. “It was completely obvious throughout my summer assisting Dr. Botton with his research that I was working alongside an expert,” she said. “Globally, Dr. Botton is considered to be the leading expert on the American Horseshoe Crab,” she added.

As an aspiring wildlife conservationist, Rothwell is inspired by Botton’s contributions to the effective planning of horseshoe crab conservation efforts.

Botton said, “We’ve managed to do in 100 years what natural history didn’t do in 450 million in threatening these animals. So I’ve become an advocate for their conservation.” He continued, “If we don’t mess things up for them too much. They’ll outlive us for sure.”

According to the International Union for Conservation, the American Horseshoe crab is confirmed vulnerable on the Red List of endangered and threatened species. Contributors to their vulnerability include increased construction on coastlines, rising sea levels, usage of their blood to test for bacterial contamination in pharmaceutical drugs and vaccines, and their usage as bait to catch eel.

Despite the concerning status of the species, Botton said it’s gratifying to see his students and other young biologists like Bicknell work on furthering his efforts with such dedication.

When asked what he’d like people to know about the animal, he warned people to avoid making assumptions about them, the way he had as a kid.

“Don’t be afraid. They don’t bite; they don’t sting. They may not be the prettiest thing that’s ever evolved but you should appreciate something that’s managed to stay alive and kicking for 450 million years,” Botton said.