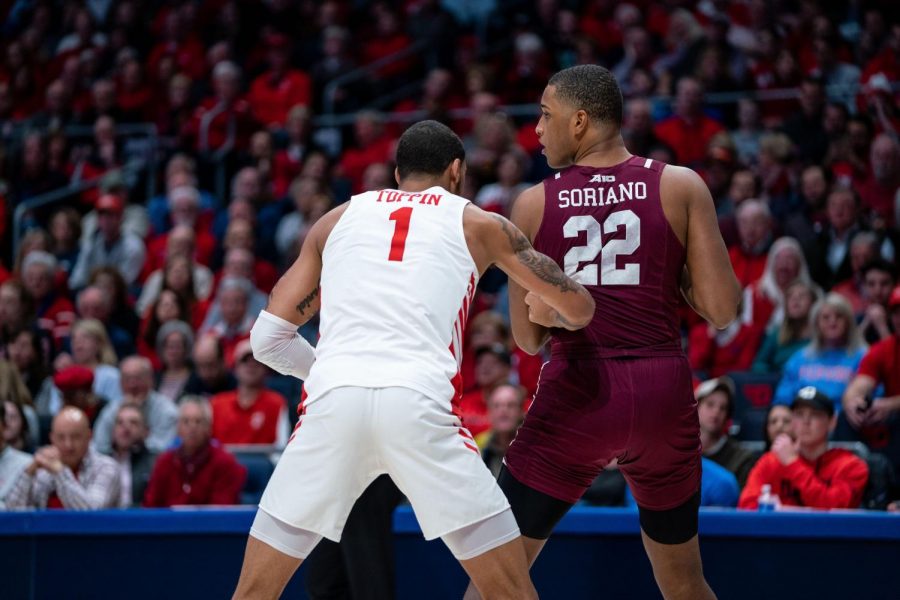 What did the 1-7 Fordham Rams, winless on the road and missing three starting players, want to achieve against Dayton University, ranked seventh in the country with an 18-2 overall record?

The goal was certainly not to win, but to survive, to play the full 40 minutes without suffering further injuries to the team’s players or pride. In this regard, they succeeded, losing 70-56 in routine fashion to a vastly superior opponent.

Going into the game, the Rams more closely resembled sacrificial lambs. In addition to two straight losses against Saint Louis and Saint Bonaventure, they were also missing three key players. Chuba Ohams, Fordham College at Rose Hill (FCRH) ’21; Erten Gazi, FCRH ’20; and Onyi Eyisi, FCRH ’22, have seen significant playing time all season, but none of them were available for the matchup against the Flyers.

Considering all of this, predicting the margin of defeat became more important than choosing the victor. In a game where they had no chance, Fordham gave an honest effort.

Throughout the 40-minute game, the Rams led for 18 seconds, a small feat many didn’t anticipate. A two-point jumper from Joel Soriano, FCRH ’23, was the first score of the game and put Fordham ahead, 2-0. Dayton responded on the next play with an assertive dunk from forward Obi Toppin, Dayton ’21. It was the last time the score was tied.

By the end of the first half, Dayton had taken a commanding lead, 36-17. The Rams went back to the locker room down 19 points to one of the top 10 teams in the country in front of more than 13,000 fans. The game had effectively already ended.

The first five minutes of the second half went by uneventfully, with the two teams trading scores and Dayton pulling further ahead, 47-25. Then, with 15 minutes left to play, a surprising, perhaps even touching, turn of events transpired — Fordham showed some life.

It began with a three-pointer from Ty Perry, FCRH ’22. On Dayton’s next possession, they missed, and a miscommunication in transition led to a Fordham fast break. Jalen Cobb, FCRH ’22, pulled up from beyond the arc and sank another three-pointer. Dayton’s attempt at a response ended in another missed shot and the ball went the other way, ending up in Perry’s hands. He scored again, his second three-pointer within a 90-second time frame.

The nine unanswered points were little more than a wake-up call for Dayton, who still led by 13 and scored on their next three possessions. Still, it was finally a response from Fordham, some small sign they wouldn’t go quietly. For the first time that day, the packed Dayton gym seemed a little emptier, if only for two minutes.

The Rams continued to fight throughout the half, and actually outscored the Flyers in those final 20 minutes, 39-34. Still, they only managed to get as close to 12 points away from Dayton in what would eventually result in a 14-point defeat, 70-56.

Cobb led the offense with an impressive performance, playing 35 minutes and scoring 22 points. The team’s offense as a whole played a stellar second half, shooting 54% from the field and 64% from beyond the three-point line.

A dismal first half doomed the Rams from the start, but they managed to contend with a very impressive opponent to the final buzzer. Even if it was expected, a 14-point loss can only mean so much. This is little more than a glimmer of hope for Fordham, now 1-8 in the Atlantic 10 Conference as Dayton improves to 9-0.

But in a season well past the point of collapse, a brief glimmer is a welcome change.