UZORNIKOVA: A Guide to the Human Beings in Your Lecture 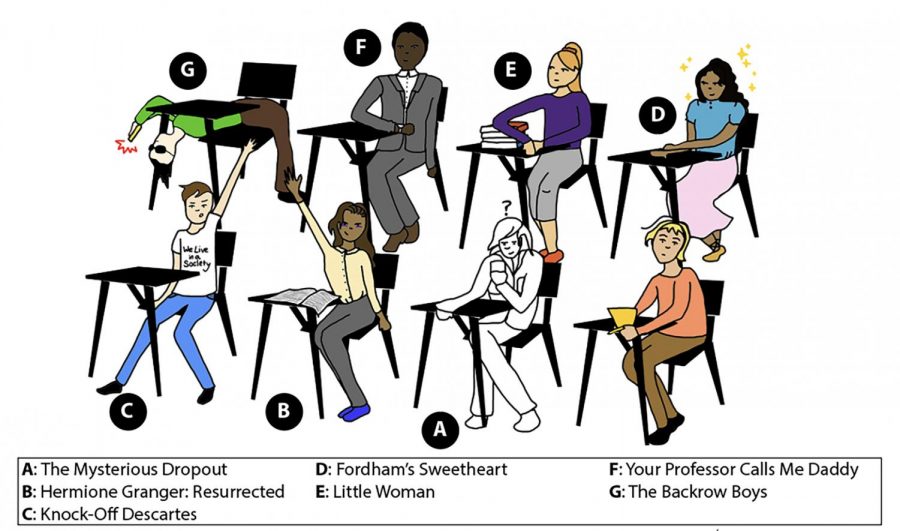 As a writer for The Observer, I observe. And what better place for objective observation than a lecture hall? Here, I present my notes on the fine Fordham specimens whom you will meet in almost every class.

Exhibit A: The Mysterious Dropout

I sat next to one of these once. He entranced me with his overly relaxed look and deep brown eyes. But what intrigued me even more was how he managed to watch TikTok videos on silent for the duration of our 70 minute class. He disappeared on the last day of the add/drop period, and I never saw him again. I wonder if he’s in a better place now. If you’re reading this, please come back. I miss you.

I came to class 20 minutes early because my club meeting ended early. She was already there, standing at the door, waiting for the gates of hell to open. Her  thirst for knowledge is to be envied. She’s an Honors kid with three majors on a 3-2 track. The dark circles under her eyes are a testament to that. Her passion for answering the professor’s questions is rivaled only by Rev. McShane’s passion for Jesuit values. During peer review, she commented on my misuse of semicolons. It was amazing.

Although he claims that his existence is backed up by the fact that he’s a thinking being, he only read the first chapter of Meditations. Nevertheless, he considers himself entitled to pronounce every opinion wrong. His T-shirt says “We Live in a Society,” but what it really means is, “I like to play the devil’s advocate.” He claims to love Dostoyevsky, but couldn’t tell his style apart from Chekhov’s. Sure that his opinions need to be heard by everyone, he is in a perpetual hand-raising contest with Exhibit B. For the same reason, he is also the worst person to stand next to in a crammed Lowenstein elevator.

They are the prettiest people in the multiverse. Everyone admires them from a distance, stalks them on social media and wishes to have a chance to stroke their marvelous hair. Their smiles are amazing, and their eyes are even better. If they ever asked for a pen in class, they immediately acquired six or seven new ones (of different brands, too). Being in a group project with them is both a dream and a nightmare because you finally can hear their voice address you, but also feel like a certain character that goes by the name of Joe Goldberg. If you ever stand next to them in a crammed Lowenstein elevator, your day automatically gets 200% better.

He should be at work right now, or having brunch with his spouse, or teaching his three kids how to play soccer. He can’t do that, however, since he is a freshman, who just happens to have magnificent facial hair and always show up to class in at least a suit and tie. He almost has as big a fanbase as Exhibit E, but not quiet. He is a certified Ignatian Yoga instructor and earns enough money to live off campus, but prefers to stay in McMahon “to stay closer to his people.” Recently, he organized a charity event in support of starving Fordham rats. This will obviously become a major part in his campaign for United Student Government  president next year.

Ever heard someone snort very loudly in the middle of class, and had no idea why? Was your train of thought ever interrupted by a very loud incoming text message alert? Have you ever felt someone’s stare penetrate the back of your head? The Backrow Boys are to blame. The lengths they go to do anything but listen to the lecture, some even resorting to doing homework for their other classes, are quite impressive. And I have to confess, sometimes, I am one of them.

There are a few ways to use this article. You can use it as a (somewhat incomplete) guide to Fordham’s fauna. You can play a “fun” game of “tag yourself,” alone or with friends — just know that if you do this in class, I am not responsible for the consequences. You can use it as a tissue if you accidentally spill tea on your desk. You can also print it out, frame it and hang it up on your wall. Just know that every action you take defines you, and who knows, maybe you will find yourself as a new category in my lengthy catalogue.