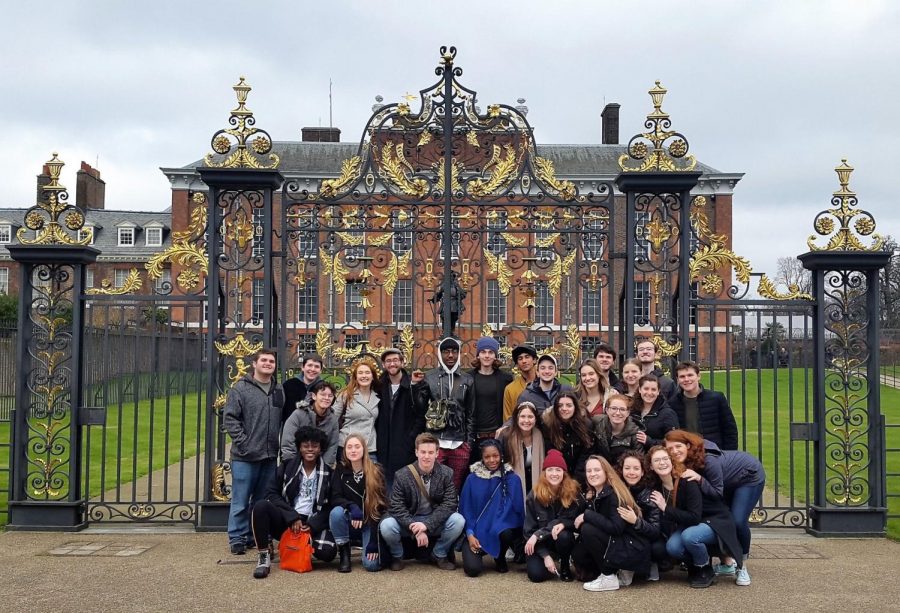 Fordham London Dramatic Academy Class of 2019 outside the Kensington Palace. Students said that their close friendships made the program memorable.

By ALLIE BEEKMAN and SOPHIE PARTRIDGE-HICKS

After nearly two decades under Fordham leadership, the London Dramatic Academy (LDA) will be closing at the end of the Spring 2020 semester. Richard P. Salmi, S.J., will also be stepping down as the Head of London Center.

LDA theatre students, alumni and those hoping to study at LDA in the future have expressed their sadness about the program’s closure. “I was transformed by my experience in LDA.  It is, and probably will be for a long time, the best experience of my life, and I feel so fortunate to have been able to go,” Daniel Camou, Fordham College at Lincoln Center (FCLC) ’20 and LDA in 2019, said.

LDA was founded in 1979 by Marymount College, and Fordham University took over the conservatory in 2001 when the American universities consolidated. Since then, Kathryn Pogson has served as the artistic director and helped grow the program into the competitive dramatic institute it is today. LDA was housed at Fordham London Centre in Clerkenwell, London with exclusive theater facilities, including a modern performance floor.

“Theater is demanding and you must be able to look after your unique talents and to nurture the blessed gift of every creative performer,” Pogson said on the LDA website.

LDA comprised professional actors and actresses who, while working on their respective productions around London, would take time to also teach LDA students.

“Many of my professors worked at Royal Dramatic Academy, a world-renowned acting conservatory, and to have those instructors come with that knowledge and expertise… it was an unparalleled learning experience,” said Zack Clark, FCLC ’21, who participated in the program in 2019.

Another student, Charles Buscarino, Fordham College at Rose Hill ’20, said, “The instructors in LDA were absolutely dedicated to what they were teaching. Their passion and commitment to theater in all its forms really helped foster a sense of fellowship between everyone in the class.”

Other members of the LDA faculty include Zoë Waites, who taught classes that focused on Shakespeare. While in London, Camou and other LDA students even attended her play “The Double Dealer” by William Congreve at the Orange Tree Theatre.

Waites expressed her sadness toward the closing of the program to former LDA attendees in an email.

“We are kind of in shock here, and personally I feel really devastated. Such a blow,” Waites wrote. “I feel pretty bleak and uncertain about the future. The combined blow of Brexit and LDA closing feels somewhat battering to say the least.”

Many theater students said that the LDA program was the reason they chose Fordham, making the news of its closure especially upsetting to underclassmen who now will never be able to experience LDA.

For Lila Holley, FCLC ’23, a major reason that she joined the Fordham theatre program was for the experiences at LDA. “This was going to be the big moment of my education,” she said.

“Going abroad to LDA was one of the big things that made me choose Fordham’s theatre program. I want to focus my career on classical theater, it seemed like a perfect opportunity to learn in the environment where Shakespeare was born,” Eliza Pagel, FCLC ’23, said.

Joseph Rienti, director of the study abroad office, wrote that the administration is working with the Fordham theatre department to try and locate other potential theater programs for students to study abroad.

“We have been working closely with Theatre Department faculty and have identified the London Academy of Music and Dramatic Arts as a good alternative for Performance students interested in studying abroad in London next year and in the future. Some theater students, in the past, have opted to enroll in our London Internship program and completed internships in theater management,” Rienti wrote.

Rienti cited additional study abroad options for theater students in Moscow, Mexico City, Buenos Aires, Grenada and Milan, all of which have been attended recently by Fordham theatre students.

Jacobs added that the current space used for LDA will be converted to expand other London Centre facilities.

“Fordham will reconfigure the spaces that had been used exclusively by the LDA to provide additional classroom and student spaces at London Centre, thereby expanding capacity for new and existing academic programs,” Jacobs wrote.

“I am confident that London Centre will emerge from this period of transition with a clarity of vision and a renewed ability to capitalize on its many strengths,” Jacobs wrote. However, many students believe that LDA was an integral part of the London Centre experience and do not think that the campus will be the same without it.

“There is no other program at Fordham that has challenged its students so passionately or impacted its student so profoundly or inspired them so lastingly than LDA,” Camou said. “It is utterly unthinkable to cut a program that cared so much,” he continued.