Fighting the Climate Crisis: One Alumna on the Front Lines 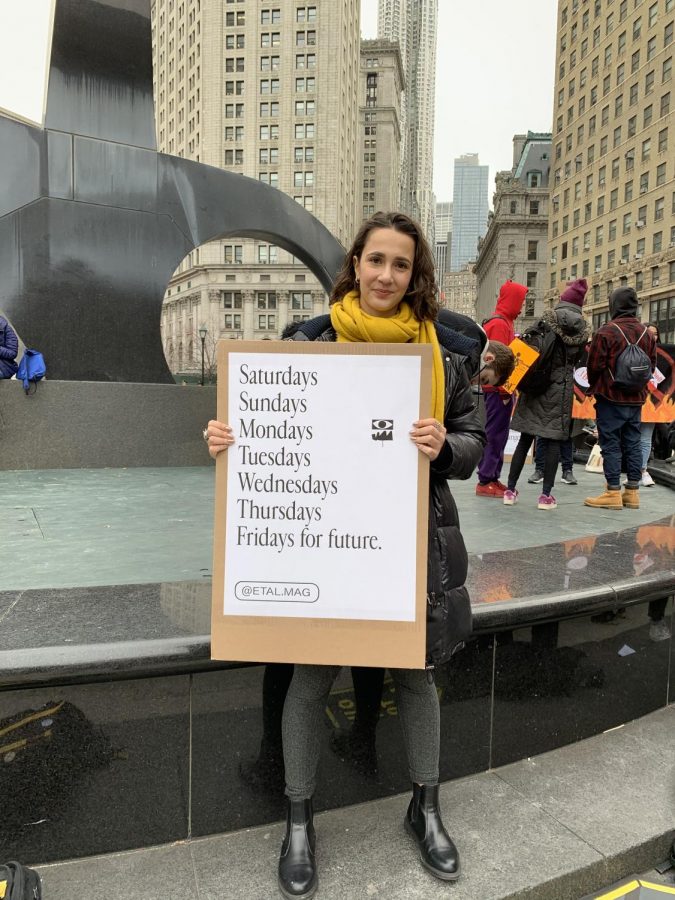 Martella constantly fights for an eco-friendly future as a climate activist.

On Dec. 6, 2019, hundreds of young people gathered outside of City Hall for the Fridays for Future Youth Climate Strike. The crowd huddled close to the makeshift stage on the Triumph of the Human Spirit Statue at Foley Square as representatives from different climate activism organizations gave speeches demanding immediate change.

Volunteering for the organization Zero Hour, a youth-run climate movement that played a pivotal role in organizing the youth climate strike, was Ludovica Martella, Fordham College at Lincoln Center (FCLC) ’15.

The energy of the crowd was fiery as Martella began to speak about the fossil fuel industry and the problems it creates for the environment. In addition, she brought light to humanitarian links such as domestic violence and the suffering of indigenous peoples, communities of color and immigrant populations.

However, on top of demanding change in the fossil fuel industry, Martella also demanded hope. Hope for a brighter future, a solution to this problem, and a younger generation that will use their voice to implement the change.

One part of the problem that Martella stressed was the impact that the climate crisis has on indigenous communities.

“Remember the term ‘green grabbing.’ Major corporations are using the term ‘green’ but are actually taking land from local people in order to produce clean energy for the 1% worldwide,” Martella said.

To Martella, this is one of the most important and underrepresented facets of the climate crisis. As part of her graduate education at The New School, completing a Master of Arts in International Affairs in 2018, Martella’s research focused on climate governance and minority rights, connecting the dots between issues of socioeconomic disparity and climate. Now, as a part of LensCrafters consumer insights team that works towards sustainability, she is working toward a post-graduate certificate in sustainable strategies focusing on indigenous ecologies.

Before her work with Zero Hour and her time as an undergraduate at Fordham, Martella grew up in a suburb of Rome until she moved to Manhattan when she was 13. It was here that she first became concerned with the natural world. “I appreciated being connected to nature, especially living in a city that was more like a town,” she said.

After a year at Manhattanville College as a recipient of the Dean’s Merit Scholarship as an environmental science major, she transferred to FCLC for journalism, where she started to understand the fundamental connection between the climate problem and things like poverty, hunger, and racial and gender injustice.

At Fordham, Martella was an Arts & Culture Editor at The Fordham Observer, where she focused her stories on art that talked about social issues, including the climate whenever possible.

After graduating, Martella got an internship at the Foreign Policy Association (FPA) producing a documentary for PBS called “Great Decisions.” This was a series of nine short episodic documentaries, one of which was on the topic of climate change.

Martella found direction through research for this project and getting the opportunity to talk to climate change professionals. By interviewing experts such as Ernest Moniz, former U.S. secretary of energy; and James Hansen, the first scientist who brought the issue of climate change to the U.S. Congress, her awareness and need to participate in the climate issue heightened severely.

Martella worked at the U.N. Development Program as an academic consultant on a project called Smart Cities, researching reinventing cities in a way that’s more sustainable.

There, Martella developed a case study for indigenous housing structures. Before her involvement in the project, “The U.N. was focusing their discussions on big tech companies as pioneers of ‘smart cities.’” In fact, she convinced the U.N. that the clear path to mitigating the climate crisis was looking to indigenous peoples; they are now implementing her advice.

“We live in a capitalist system, and we profit from the destruction of the environment,” Martella said. “It’s an ugly truth that we should all be aware of.”

Martella doesn’t feel as though it is hopeless, however, and stresses that in the past few years she’s seen grassroots organizations and indigenous ecologies begin to take this more seriously. What does she suggest is the first step to take to make it work? Give indigenous people their rights and their land, and learn from their knowledge and resources to combat the issue at hand.

She volunteers with organizations such as 350.org as well as an adult mentor at Zero Hour NYC, the organization that partnered with Greta Thunberg for the U.N. Youth Summit in September 2019. The major takeaway from her speech is that there is no place in this crisis for us to lose hope. “The Global Climate Strike and joining Zero Hour really helped me to have hope over finding a solution to climate change and finding a community to work with,” she said.

Standing there on that windy day in early December, Martella inspired a large number of young people to help the climate crisis in any way possible, and brought awareness to indigenous issues surrounding the crisis that are too often forgotten. She continues to lead at the forefront of the issue, but this is only the beginning.

Martella emphasized how important it is to familiarize oneself with environmental injustice happening locally. She pleaded, “You can be an artist and help out an organization to create banners for their climate march, you can be a poet and make spoken word events about the climate issue. Everyone has a part.”

If you are interested in finding your part and continuing that hope that Martella continuously calls for throughout her activism, there is another Climate Strike scheduled for Earth Day in New York City. Dozens of organizations will be focusing on all aspects of community within the climate crisis.