120 Faculty Sign Petition to Support Students for Justice in Palestine 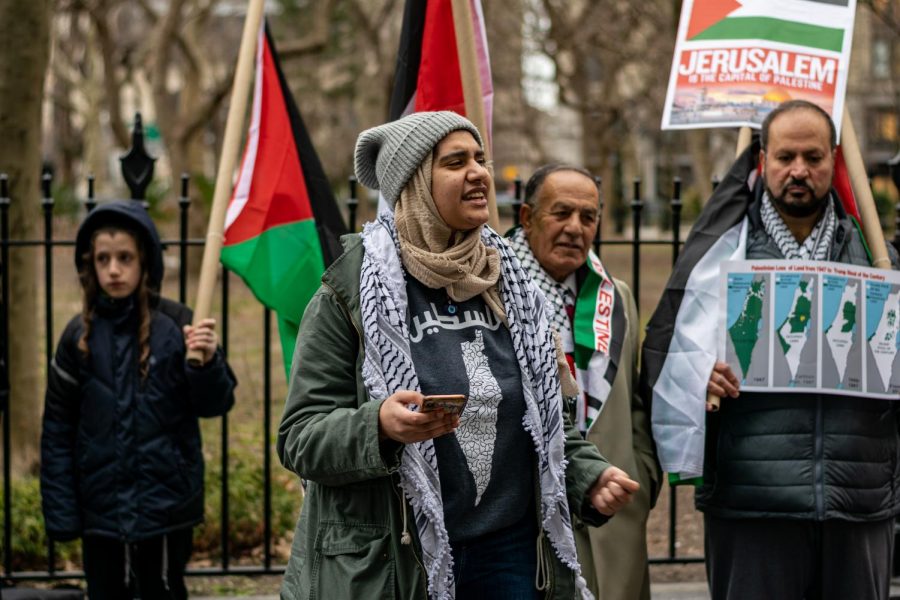 Batool Abdelhafez, FCLC '21 and former president of SJP, speaks outside of City Hall at a rally for Palestinian rights. The group is once again fighting Fordham in court to maintain its recognition as an official club.

A diverse coalition of 120 Fordham faculty members have expressed their disapproval of Fordham’s continued legal battle with Students for Justice in Palestine (SJP).

On Thursday, Jan. 30, a faculty member emailed a petition to high ranking Fordham administration, urging them to rescind the university’s appeal of the August 2019 New York Supreme Court ruling that required  the university to recognize Fordham Lincoln Center’s chapter of SJP.

The petition has two requests: first, that “the university drop its appeal of the New York Supreme Court decision;” second, that “The FCLC Office of Student Life should continue to treat Students for Justice in Palestine as the recognized student club” in accordance with the August 2019 New York Supreme Court decision and the November 2016 approval of the Lincoln Center United Student Government executive board and senate.

Catch up on SJP’s legal fight for club status here

Among the 120 signatories of the petition are faculty from six undergraduate and graduate schools and 26 academic departments across Fordham’s Lincoln Center, Rose Hill and Westchester campuses.

“There is a large group of faculty that are dismayed by the situation,” said Glenn Hendler, professor of English and American studies, and former faculty adviser to SJP.

Aseel Sawalha, associate professor of anthropology, co-director of Women, Gender and Sexuality studies, and current faculty adviser to SJP, is the second signatory on the list and sent the email containing the petition to administrators. “We teach critical thinking, open-mindedness and then the university does not tolerate a student organization advocating for social justice,” she said. “It’s almost a joke.”

For many signatories, principle came before explicit support for the cause. “The faculty who signed the petition did not sign it because they are for SJP; they signed it because they disagree with the silencing of students on campus,” Sawalha said.

The petition is addressed to university president Rev. Joseph M. McShane, S.J., and copied to, among others, Interim General Counsel Margaret Ball, Esq.

Assistant Vice President for Communications Bob Howe spoke on behalf of the university: “Fordham acknowledges the issues raised in the petition, which the University has addressed in its procedures and in court filings. The University will await the outcome of its appeal before deciding upon any course of action.

“We view the University’s appeal of the NY Supreme Court decision as problematic for several reasons,” the petition reads.

Quoting Arturo Sosa, Superior General of the Society of Jesus, in his 2018 address to the International Association of Jesuit Universities, the petition portrays the appeal as contradictory to Fordham’s Jesuit mission. The university “is a privileged space for exercising human freedom … to search and find the paths of social transformation,” Sosa said.

“The students of SJP fully believe they are on one such path of social transformation,” the petition read. “The university should support their search for their path, not block it.”

A representative of SJP spoke to both the petition itself and Fordham’s official response. The petition “is significant because it shows what Fordham has done is a clear misdeed and neither the faculty nor the students are standing for it,” they said.

“Fordham’s response is both significant and insignificant,” the representative said. “It is insignificant because it does not address any of the issues raised in the petition. It is significant because of the Fordham administration’s overt censorship of what SJP stands for, and because SJP is the first club on campus to be explicitly anti-colonialist, anti-racist and anti-imperialist, where does that leave Fordham?”

“As is true of the student body, the faculty at large, and the full Faculty Senate, members of the Executive Committee bring a range of different perspectives to these issues and are not of one mind about them.”

Copied to the email were Chief Diversity Officer Rafael Zapata, FCLC Dean Laura Auricchio and FCRH Dean Maura Mast. Auricchio and Mast did not add further comment to the university’s official statement, and Zapata did not respond to a request for comment.

The petition further criticizes the legal appeal for its “chilling effect — both on how Fordham students experience a university that takes its students to court for starting a club that addresses issues of social justice; and also on the credibility of our university as a place that supports free speech and intellectual exchange.”

“This is the big free speech issue of our time,” Hendler said. “Fordham had the chance to let that speech happen, or to take the other side.”

As of Feb. 4, Fordham administration has not responded directly to Sawalha’s email. “One of the things that really annoyed some of us on the (petition) committee was that we did not receive a response. They didn’t even acknowledge that we sent the email,” she said.

“Faculty lose faith in the upper administration’s judgment when they make decisions like this,” Hendler said.

A final criticism of frugality argues that “money that will be swallowed in legal fees could be spent on more fruitful academic purposes.”

The university’s appeal is still in litigation and the future at Fordham of “the promotion of justice, the exercise of free speech, and the fostering of critical intellectual exchange,” as outlined by the petition, is yet to be determined.

For the signatories of the petition, the appeal sends a clear message, but not a permanent one.

“It’s not a good message for free speech on campus. It will prevent students from doing something similar in the future,” Sawalha said. “We need to bridge the gap between the generations; between students and the administration.”

“I wish they will talk to the students instead of taking them to court.”

The transcript of the SJP petition reads as follows:

We the undersigned faculty members at Fordham University are concerned about recent developments pertaining to Fordham University College at Lincoln Center students’ right to organize a club called Students for Justice in Palestine.
The Supreme Court of the State of New York ruled on August 5, 2019 that Fordham’s decision to overturn the FCLC student government’s recognition of Students for Justice in Palestine (SJP) was “arbitrary and capricious” and that the university’s decision had no “rational basis.” The court concluded that Fordham’s rules do not empower it to restrict recognition of a student club based on its potential for raising issues or taking political positions that might be controversial or unpopular with a segment of the university community.
Therefore, in August 2019 Judge Nancy Bannon ordered that “Fordham University is directed to recognize Students for Justice in Palestine at Fordham University as a university-sanctioned club.” While the students who initially sought to form SJP at Fordham in 2016 have graduated, current students have successfully organized themselves. Fordham should embrace SJP as an active student club, especially after this clear 2019 legal victory. Yet as both student newspapers have reported, Fordham University’s administration has filed an appeal of the New York State Supreme Court ruling.
In light of this recent turn of events, we the undersigned Fordham faculty members support the former and current students’ court-approved right to form this club as members of a University community oriented toward the promotion of justice, the exercise of free speech, and the fostering of critical intellectual exchange. Specifically, we request that:

(1) The university drop its appeal of the New York Supreme Court decision, and;

(2) The FCLC Office of Student Life should continue to treat Students for Justice in Palestine as the recognized student club that it is, in compliance with the court’s August 2019 decision and the November 2017 votes of the United Student Government Executive Board and the Senate.

We view the University’s appeal of the NY Supreme Court decision as problematic for several reasons.

First, it contradicts Fordham University’s Jesuit mission, which aspires to foster “the intellectual,
moral and religious development of its students and prepares them for leadership in a global society”–a society that is fraught with complicated political, social, and economic realities, and for which Jesuit universities hold a particular responsibility–and opportunity to–foster the conditions that facilitate intellectual and moral reflection on pressing issues of our time. As Fr. Arturo Sosa, Superior General of the Society of Jesus, observed in his 2018 address to the International Association of Jesuit Universities: “The university is a diverse environment in which the conditions for dialogue and in-depth understanding of historical, personal and intellectual processes are produced. It is a privileged space for exercising human freedom…to search and find the paths of social transformation.” The students of SJP fully believe they are on one such path of social transformation. The university should support their search for their path, not block it.

Second, as faculty we are concerned that the University’s effort to undermine the NY Supreme Court ruling by appeal will have a chilling effect–both on how Fordham students experience a university that takes its students to court for starting a club that addresses issues of social justice; and also on the credibility of our university as a place that supports free speech and intellectual exchange.

Finally, as faculty we are puzzled by the apparent waste of university resources: Court battles are costly and time-consuming, and the money that will be swallowed in legal fees could be spent on more fruitful educational purposes.