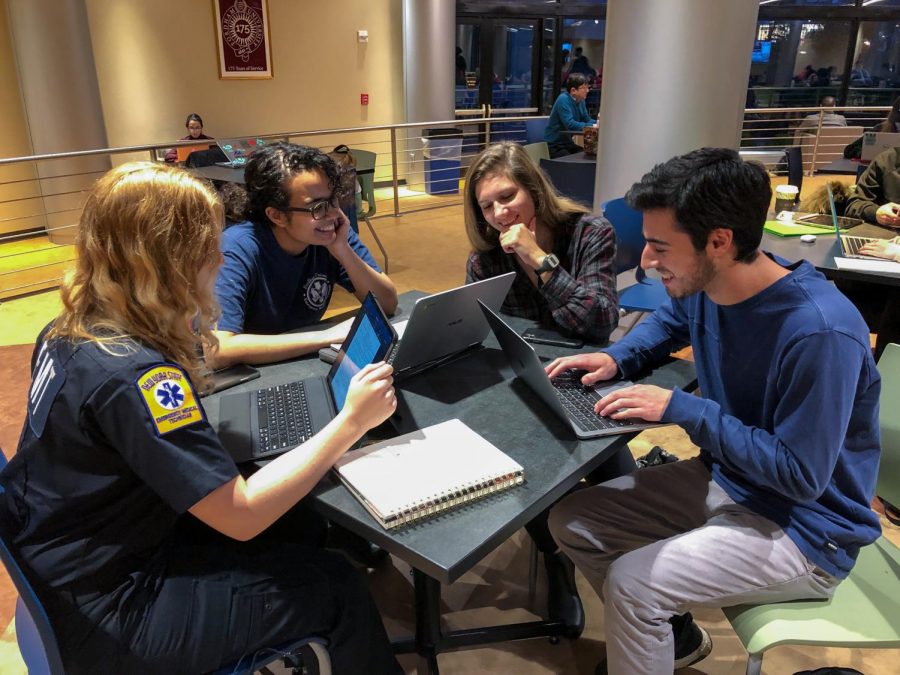 Fordham University Emergency Medical Services (FUEMS) created a Lincoln Center committee on Sept. 29, in order to make the club more accessible to students at the Fordham Lincoln Center (FLC) campus. However, as a club founded at Rose Hill, it has yet to be recognized as an official club by the Office of Student Involvement at Lincoln Center.

FUEMS started as a club in 1977 under the name “Student Emergency Response Group” (SERG). It was founded by Bruce Nedelka, Fordham College at Rose Hill (FCRH) ’79, who had the idea of providing student-run emergency services on the Rose Hill campus.

This was before emergency vehicles or paramedics existed. “They would literally just run around with this little bag of medical supplies,” Nate Singh, FCRH ’20 and director of FUEMS, said. It wasn’t until 1988, when Fordham became a certified Emergency Medical Service (EMS) agency operating under the New York State Department of Health regulations, that SERG became FUEMS, according to Singh.

“Our main goal is just to provide medical services for our fellow Fordham students,” said Brielle Intorica, Fordham College at Lincoln Center (FCLC) ’20 and the Lincoln Center committee chair of FUEMS. Intorica explained that when there is a medical emergency, Public Safety contacts the FUEMS office, and then FUEMS dispatches one of their EMS-certified Fordham students to the scene of injury, who attends to the situation.

Some of the medical emergencies FUEMS has seen include intoxication cases and cardiac arrests that have occurred at graduation, according to Intorica.

Singh believes that about 40% of FUEMS members are trained Emergency Medical Technicians (EMT). After submitting an application for training, the club provides free EMT training to Fordham students accepted into the course.

“EMT classes can be upwards of $200, so to have it right on campus and for free is amazing,” Intorica said. She is currently enrolled in the pre-med program at Fordham and emphasized that FUEMS is incredibly useful as a pre-med student. “I think that FUEMS is the perfect way to make that transition from studying medicine to practicing medicine.”

Beyond hands-on medical experience, Intorica said that through FUEMS, “you learn how to think on your feet, you learn to adapt to changes in a situation, develop a lot of courage and, it sounds silly, but you learn how to talk to people.”

Because of these benefits, the club decided to expand their reach and become accessible to FLC students.

Intorica heard about FUEMS her junior year through Alexandra Rebosura, FCLC ’18. Before this, Intorica had never heard of the club around FLC. “I was a bit of a sore thumb sticking out at FUEMS. Not even the pre-med department mentioned it,” she said.

Currently, there are approximately 200 total members in FUEMS, and only around 20 to 25 of those are FLC students, Singh said.

During the fall 2019 semester, Singh approached Intorica with the idea of making a FUEMS Lincoln Center committee. She said that she loved the idea and was ecstatic when he also asked her to chair the committee.

However, Singh clarified that in bringing FUEMS to FLC, the club won’t be adding student-run emergency medical services to the Manhattan campus.

“There’s really not a demand for that at Lincoln Center. Because the student population is a lot less, the way the campus is structured — especially with the amount of hospitals around the campus — logistically there is not much reason to have a fully functioning EMS,” he said.

Singh said the plan for the FUEMS Lincoln Center committee is to facilitate more of their club initiatives, such as its CPR services and blood drives, spreading the word about FUEMS around the campus, and facilitating easier involvement for FLC students who want to join.

The commitment to be involved with FUEMS as an FLC student is more time-consuming than it would be as a Rose Hill student, Intorica said. This is mainly because the FUEMS office is located at Rose Hill and the club holds bi-weekly training sessions on Sundays in the Bronx as well.

However, the FLC committee has already worked to solve some of these inconveniences by acquiring free Ram Van passes for club members and trying to move some of the Sunday training sessions down to Lincoln Center.

One of the issues that FUEMS has run into with implementing its programs at Lincoln Center is that it has not gone through the United Student Government’s club recognition process yet, and therefore it is not formally recognized as a Lincoln Center club.

“We can operate at Lincoln Center, but trying to operate based out of Rose Hill can sometimes get a little complicated in terms of room reservations and coordinating things,” Singh said. In order to become a formal club, FUEMS would have to write a new constitution with different policies and procedures from its Rose Hill counterpart. Singh said that is something they are looking into but have run into some trouble logistically.

“What we’re doing right now is very much in its infancy stage, so problems that pop up are expected,” he said.

He emphasized that no one at FLC has been obstructing them from becoming a club.

Both Singh and Intorica said they are optimistic for their future on the FLC committee. “We have seen the highest number of applicants for EMTs at Lincoln Center this year since the committee has been created,” Intorica said.

The committee hosted a blood drive on Feb. 4 and has plans for CPR training during the week of Valentine’s Day and mental health first aid training in April.

“I don’t care if you are an art major, a business major, it doesn’t really matter; we take people from all fields,” Singh said. “It isn’t just for people who are interested in medicine, it is for everyone.”