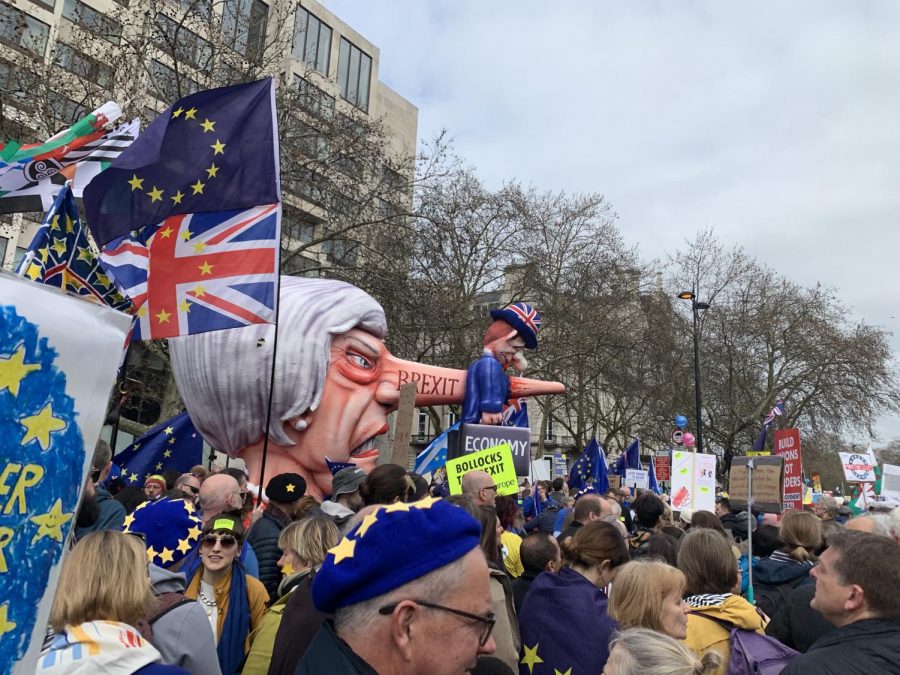 Although Brexit has been all-consuming in British politics and life, many Fordham students studying in London are unaware of how it affects them

The United Kingdom left the European Union on Jan. 31, possibly impacting the 336 students studying at the Fordham London Centre campus.

After four years of negotiations, Prime Minister Boris Johnson will now engage in an 11-month transition period to determine important parts of the Brexit deal such as travel, trade and borders. Front row to the political negotiations are study abroad students who, while spending a semester immersed in British culture, are exposed to the turbulent Brexit process.

Katharina Kremer, Gabelli School of Business at Lincoln Center ’22, a German student, studied abroad in America for the first time during the 2016 presidential election as well as at the London Centre during Johnson’s election. She compared the similarities of the current environment, saying “The way people in London talk about Brexit is similar to what people said about Trump during the election while I was studying in the U.S.”

The majority of study abroad students hold U.S. passports and entered the U.K. with short-term study letters. Only students in the internship program had to obtain working visas. Non-American and EU passport-holding students had to obtain the visas necessary from their home country to enter the U.K.

The results of a survey administered to Fordham students studying abroad in London in the spring of 2020 revealed that 40% of respondents did not understand Brexit before going to school in London, and 35% said they continue to not understand the political issue.

A vast majority of students, more than 75%, believe that Brexit will have little effect on the rest of their semester in London.

Matthew Holland, assistant head and director of student affairs at the London Centre, said that the campus operates legally as an “overseas organization” from the U.S. “The nature of the centre as a study abroad program and as an extension of Fordham in New York means we’ll probably see extremely minimal impact from Brexit in the way the program works,” Holland said. During the 11-month transition period, he believes that nothing will change how the London campus operates. The earliest term that will be affected by Brexit, if at all, will be spring 2021.

Holland said that Fordham students may be impacted financially as the value of the pound fluctuates. When Holland first started at FLC more than three years ago, he said students doubled the price of things in pounds to mentally convert to the dollar amount. However, each year, Holland said that he sees American students converting the dollar and the pound as 1:1 when it comes to budgeting for trips and spending habits.

Currently, the pound is worth $1.30. According to the BBC, Brexit could affect housing prices, importation of goods from the EU and travel. A majority of the products on grocery store shelves are imported, and the rise of grocery costs would directly affect students when it came to budgeting. The Fordham University London Centre Pre-Departure Handbook for spring 2020 states that London Centre participants spend 1.5-2 times their home budget while abroad, approximately 1,000 pounds per month.

Since the program fees and tuition are dealt in dollars and processed in New York, this may even be beneficial for American students if the value of the pound decreases.

Since the U.K. was already not operating within the Schengen Area (an international travel jurisdiction of European countries that don’t require passports between borders) Students Affairs already had to obtain single-entry visas for some international students to attend the program trips, regardless of Brexit.

Although 70% of students expressed a lack of interest in the Brexit negotiations, the four-yearslong debate has shaped many students’ experiences. The British population first voted to leave the EU in a divisive referendum on June 23, 2016, causing Prime Minister David Cameron to step down from his position the next day.

On July 13, 2016, Theresa May became the Prime Minister of the country and began a year long period of negotiations to determine the Brexit deal.

Dan Nasta, Fordham College at Lincoln Center (FCLC) ’19, studied abroad in London in the fall of 2019. “It was over a year after the referendum, so everyone I met had already had time to grieve over it … but it still stuck over everything like a fog, and that was kind of a bummer,” Nasta said.

Nasta had European friends at the University of Westminster, whose European perspectives, he claimed, dramatically improved his educational experience.

“We weren’t really sure if their residency and their lives were at stake because of Brexit,” Nasta continued. “The anxiety Brexit was causing did not improve the quality of life,” he said.

In March 2017, Prime Minister May officially triggered Article 50, which started the two-yearlong countdown until the U.K. would have to officially leave the EU. May continued to meet with different EU officials, but in March 2019, with no viable deals as options, the House of Commons voted to extend Article 50.

Finley Peay, FCLC ’20, studied abroad in London in spring 2019 and watched as the U.K. Parliament tried and failed to craft a realistic Brexit deal. Peay was able to attend parliamentary debates with her political science class. “It was a once-in-a-lifetime experience. I didn’t know what was going on, no one really knew. Even May was trying to figure out what was going on,” Peay said about watching the negotiations.

Also studying in London at the same time was Michael Finnan, Gabelli School of Business at Lincoln Center ’21, who said that he was paying attention to Brexit politics in order to monitor the value of the pound.

“I knew that if Brexit actually went through the pound would definitely drop,” he said. “Even though I was conflicted about the politics, there was a part of me that wanted to see the impact on the economy, as life as an American in London would have gotten a lot cheaper,” Finnan continued.

After failing to pass another Brexit deal, May stepped down as Prime Minister on March 27. The U.K. and the EU agreed to extend Article 50 on April 10, 2019, until Oct. 31, 2019, giving the House of Commons another five months to reach an agreement.

As fall 2019 study abroad students arrived in London, Boris Johnson took the helm of British politics and worked to try to pass another deal. Then, in October 2019, Johnson’s Brexit deal failed to pass in Parliament, and he wrote to the EU asking for a third extension.

“I felt like Fordham students started avoiding the topic with Londoners that we met because they were both so heated about it and also just exhausted from talking about it for so long,” said Sydney Costales, FCLC ’21, who studied in London in fall 2019.

In December 2019, Prime Minister Johnson promised the British public that he would “Get Brexit Done,” and voted to make it illegal to extend Article 50 in 2020. On Jan. 31, 2020, the U.K., even without having secured a deal or finalizing a plan for the future, left the EU and officially “Brexited.”

Zahir Wuader, Fordham College at Rose Hill ’21, attended Brexit demonstrations in front of Westminster Abbey on Jan. 31 at 11 p.m. “We just went for fun to see what was going on since we had no stake,” he said. Wuader stated that it was mostly Pro-Brexit celebrations from people wearing Union Jack paraphernalia. “It was much calmer and relaxed; we expected it to be like a Trump rally.”

Many students did not take part or even see any Brexit demonstrations. Kyle Eber, an Emerson College student studying in the London Liberal Arts program, said he saw protesters dressed in Star Wars costumes holding “We’ll Be Back” signs the next day, but chose not to participate in any demonstrations, “It’s not my rally to attend. I’m not a citizen of the U.K. or from Europe. As an American, it’s not my place to protest or support.”

While the country has officially Brexited, political negotiations that will determine the future of the U.K. are far from finished, and will continue to shape the experiences of Fordham London study abroad students.