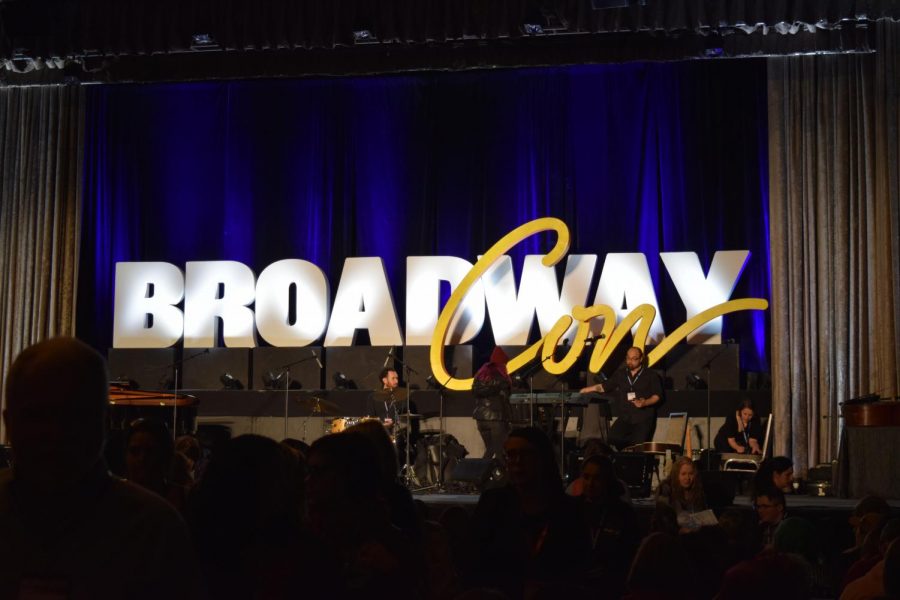 This year's BroadwayCon included a panel on what to do with a theatre B.A., a panel about the new TV show "Katy Keene" and of course, plenty of showtune singalongs.

The weekend may have been rainy and chilly, but “oh, what a beautiful mornin’” it was for those nestled in the New York Hilton Midtown for this year’s BroadwayCon. Since 2016, theater fans and professionals, including many from the Fordham community, have joined to celebrate and debate the state of the theater industry. Now in its fifth year, BroadwayCon still sees thousands of people participate in panel discussions, trivia and costume contests, and, of course, a singalong around every corner.

Considering the Lincoln Center campus’s location within walking distance from the theater district, it’s no surprise that Broadway fans comprise much of the student body — and a portion of the annual convention-goers. Brielle Cayer, Gabelli School of Business ’22, has attended almost every BroadwayCon since its inception, this year marking her fourth time.

“The theatre community is so small and tight-knit,” Cayer said. “We don’t get as much recognition as a lot of other fandoms or groups, so to gather together for a whole weekend in the heart of NYC is something so special. I’ve made so many friends at the con, and I’ve even been able to meet people I’d previously only known from Instagram or Twitter.”

Although she’s been to the convention so many times, she said there are “surprising moments” in store each time.

“Last year, one of my favorite performers, Kristin Chenoweth, made a surprise appearance,” Cayer said. “Not only that, you can be walking down the hall and casually pass Broadway favorites like Anthony Rapp or Donna Murphy, which is the coolest for Broadway nerds like me.”

Fordham alumni, in turn, are themselves making a mark on the Great White Way. Ahead of his upcoming run as Michael Jackson in the new musical “MJ,” Ephraim Sykes,Fordham College at Lincoln Center ’10, was fresh in the mind of Sergio Trujillo, who won the 2019 Best Choreography Tony Award for “Ain’t Too Proud.” In a panel titled “Groundbreaking Choreographers,” Trujillo lauded Sykes’ dance abilities — which he developed in the Fordham/Ailey dance program — during the process of developing “Ain’t Too Proud.”

What the Degree Means to Me

One panel specifically geared toward the college crowd was titled “What Do You Do with a BA in Theatre?” The discussion featured four panelists who have applied their studies to different arts professions including television, live theater and artistic direction.

“I really wanted a really strong liberal arts education, and I also think that that makes you a well-rounded performer,” McIntosh-Newsom said.

She grew up doing theater and began her post-undergrad career that way before transitioning to artistic direction. Others, like Ellie Desautels, known for playing Michael in NBC’s “Rise,” developed their interest in the industry while pursuing their B.A.

“I majored in music. Flash forward to sophomore year, I was like, ‘Nah, I don’t want to do music anymore.’ It just didn’t fit,” Desautels said. “I became a theater major and I got to grow as a performer in all aspects of the definition of performer. I found a love for theater, and I still love theater, but I went on to pursue film and TV.”

All the panelists saw it important for students to supplement their studies with independent work, including going to auditions outside their university and making connections with professionals while still in school. Actress Lilli Babb, who currently plays Pam in “The Office: A Musical Parody” off-Broadway, had the fortunate experience of meeting an agent while still in college in New Jersey, launching her career right away.

“An agent came to my school senior year, and she happened to be looking for ingenues,” Babb said. “I had two callbacks the day of my graduation. I ran, I got my diploma, and I ran out. I went to New York and had my final audition with them.”

She emphasized, however, that she only got one job through that agency, and found “every other theater job (she) booked since (she) graduated” by seeking out opportunities herself. Desautels, who uses they/them pronouns, expressed a similar sentiment. They were discouraged from pursuing outside opportunities while in school, but they believed in doing both.

“They didn’t sway me from pursuing my career, but it is ‘something we don’t recommend,’” they recalled their professors telling them. “That’s not exactly what college should be.”

Though all the panelists pursued theater degrees, they acknowledged it’s not the only kind of education that can lead to an arts career and offered advice to aspiring professionals of all areas of study.

The aspiring professionals at BroadwayCon weren’t limited to the theater industry. TV fans flocked to the convention on Sunday for an advance screening of “Katy Keene,” a spinoff of “Riverdale,” premiering on the CW on Feb. 6. Its premise sounds, perhaps, like the biography of many a Fordham student: Young people move to Manhattan to chase their careers. It certainly rang true for the show’s star, Lucy Hale, of “Pretty Little Liars” fame.

“I was like, ‘This reminds me so much of my 20s and moving to LA and wanting to become an actress, and kind of naive about it but not letting anything get in my way,” Hale said.

Her character, Katy Keene, aspires to be a fashion designer. The show, however, is meant to be an inspiration to all up-and-coming professionals as they pursue their goals.

“People watching aren’t necessarily wanting to be fashion designers or perform on Broadway or be boxers or singers, but everybody has, hopefully, some sort of a dream or a passion,” said Zane Holtz, who plays wannabe boxer K.O. Kelly. “And if we can make you feel good and give you the inspiration to go out and chase it yourself, then we’ve done our job.”

The characters’ identities are a source of inspiration for the cast themselves, such as Jonny Beauchamp, who plays aspiring Broadway star Jorge and his drag-queen alter ego, Ginger Lopez. Beauchamp expressed joy to be playing a queer, Hispanic character, a type of representation he didn’t see in his childhood, and that he hopes resonates with other underrepresented viewers, especially young people.

“Not only do I get to play an artsy character, but the kind of person that could be all of those things and a human being and still have a family and still have best friends and chase your dreams,” Beauchamp said.

Correction: An earlier version of this article misstated Cayer’s college. The article has been corrected to reflect this change.