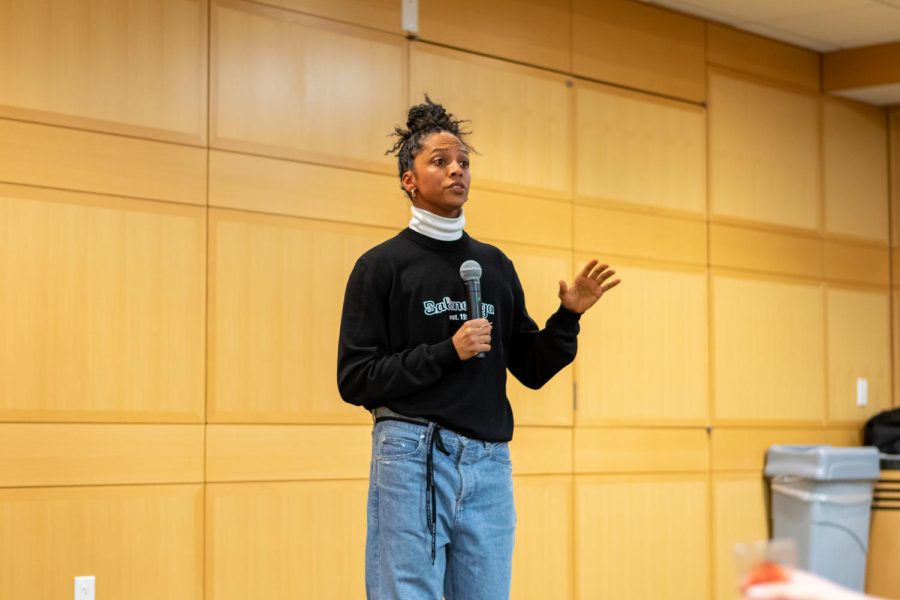 For Khan, the bottom line is this: “We need to come out of our fear and into our power. Every person can grow into their fears, their passions and their freedom.”

On the evening of Feb. 23, Room 7-119 in Fordham Law School was teeming with an unusually large number of Fordham students, staff and administration who had gathered to honor Radical King Week at Fordham. Members of the Fordham community had gathered to listen to Janaya Khan, co-founder of the Black Lives Matter movement in Toronto. At 6:30 p.m., the speaker rose and a silence fell upon the crowd.

Khan, who uses they/them/theirs pronouns, began by stating that they were black, queer and gender-nonconforming. Over the next hour, they discussed the persistent exclusion of people of color and the increased division in the United States. They also talked about the perpetuation of rape culture, personal anecdotes from when they experienced racial discrimination.

Khan also talked about public figures and subjects such as Nathan Phillips and Nick Sandmann, and drew comparisons between the Parkland shooting activists, whose praise was well-deserved and necessary, and young, black activists who rose up for the Black Lives Matter movement but were not embraced in the same way.

“They were not celebrated. They were maligned. They were rebuked. I want to ask you: What does it do to us, as a society, when we decide some children are worth more than others? On some level, we believe that black people deserve what happens to them.”

Halfway through the speech, Khan arrived at the root of the problem: “The political left is so very good at coming together against a thing, at deconstructing. But we struggle when it comes to having clarity and agreement on what it is that we’re building. At this point, we don’t have a bottom line.”

As the talk reached its end, Khan answered the discussion’s overarching question: How do activists win? They implored members of the audience to band together, “come out” and show up for the most vulnerable members of society, to be the people they’ve always wanted to be, to imagine differently.

Sydney Boyer, a student at the Fordham Graduate School of Social Service, was struck by Khan’s reaffirming words.

“As a second year graduate student, I really resonated with the part when they said that no one starts out remarkable –– you become remarkable,” she said.“I come from a small town in Ohio, which is predominantly white and middle income. When they were talking about people who would vote a certain way, I was like, ‘How could I better take the tools I’m learning from this and put it back into my community?’ Because those people might listen to me!”

Lu Aubin, Fordham College at Lincoln Center ’23, found Khan’s vast command over their words and dynamism inspiring, particularly their confident embodiment of gender-nonconformism and the kind of future that entails.

“Janaya Khan’s outlook on these ideals as suffocating for a fellow trans/gender-nonconforming human was incredibly powerful and affirming, and I hope that in partnership with the topics they presented throughout the night, that we will march closer to a society which is less dangerous and increasingly comforting for all people: oppressed and oppressors,” Aubin said.

When asked whether Fordham is doing enough to include race in conversations and formal discussions, Aubin and Boyer differed in their responses. Aubin was uncertain, but she believed that Fordham is only as progressive as the state of New York and it “must always take steps to realize its own shortcomings.”

Boyer focused more on her experience at the graduate school, where she noticed that professors weren’t always ready or didn’t have the tools for conversations about race. To combat this, she advises the university to provide those tools before asking professors to teach courses in a field that is so entrenched in topics of social justice.

For Khan, the bottom line is this: “We need to come out of our fear and into our power. Every person can grow into their fears, their passions and their freedom.”