Nutrition labels may not be provided on alcoholic drinks, but that doesn't mean the calories don't count 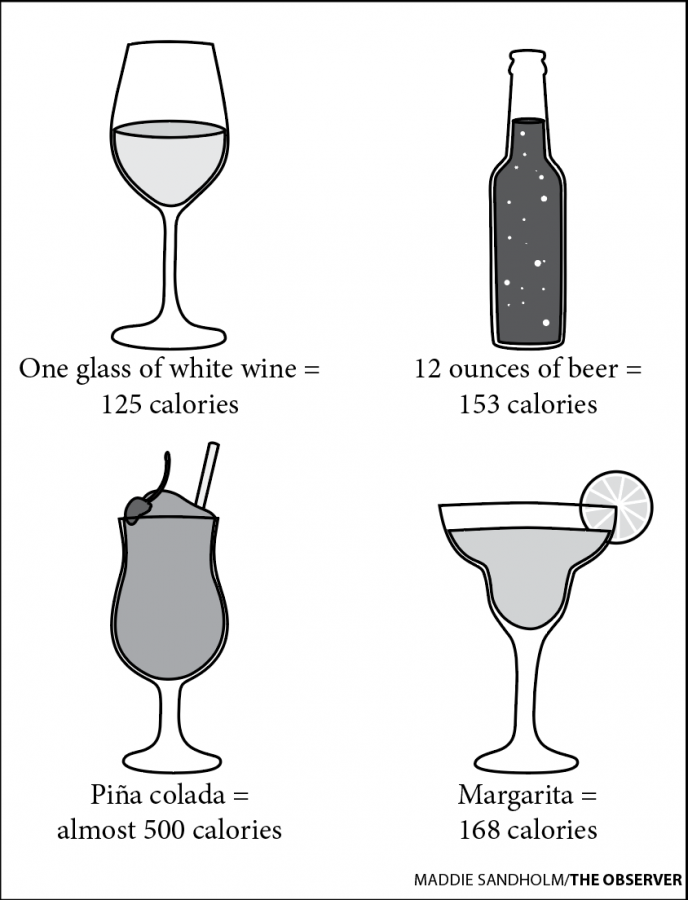 AlcoholEdu stresses drinking responsibility, but the creators of this educational module focus on blood alcohol content and the factors that can exacerbate alcohol’s effects on the brain. Though AlcoholEdu exhaustively highlights how alcohol affects us while we are drinking it, the program ignores one major way alcohol can impact us in the long term. That is, alcohol — from wine to tequila — is packed with calories.

To put the number of calories into perspective, the 2015 to 2020 Dietary Guidelines for Americans states that a standard alcoholic beverage contains 14 grams of pure alcohol, which contributes 98 calories to the drink. Other ingredients in the specific type of alcoholic drink will add to the total number of calories. According to the National Institute on Alcohol Abuse and Alcoholism (NIAAA), a glass (eight ounces) of white wine will generally contain 125 calories, whereas 12 ounces of beer has 153 calories. On top of the alcohol, mixers can add even more calories to the drink. A piña colada, for instance, has almost 500 calories, which largely come from the pineapple juice and coconut cream.

It may not come as a surprise that drinking a glass of wine might be on par calorically with a bottle of Coca Cola, but it’s hard to account for such calories when most alcoholic beverages are missing a nutrition label. Alcohol does not fall under the supervision of the Food and Drug Administration (FDA); rather, the Alcohol and Tobacco Tax and Trade Bureau regulates alcohol sales and consumption and does not require alcohol companies to place nutrition labels on their products. The FDA can regulate products with 7% or less alcohol content, which is why drinks like spiked seltzers have nutrition labels.

Of the 80% of college students who drink, it’s estimated that 50% engage in binge drinking, which is consuming more than four to five calorie-rich drinks in a two-hour period. For example, four margaritas, at 168 calories per drink, can contribute 672 extra calories to your caloric intake that day. Overdrinking on a weekly basis could make it more difficult to control weight gain, which would coincide with the other health problems associated with alcohol.

According to the 2015 to 2020 Dietary Guidelines for Americans, drinking in moderation means only having up to one drink per day for women and two drinks for men. Nutrition labels on alcohol bottles still seems far off from becoming a reality, so along with consuming alcohol in moderation, the NIAAA has an Alcohol Calorie Calculator that can give you a rough estimate of the additional calories alcoholic drinks provide.

Meticulously counting calories is not a realistic practice and becomes even more difficult in social situations. However, keeping basic nutritional factors in mind could make for a healthier night. Alcohol content may have a more immediate effect, but high calorie counts can have long-term consequences.