We Came, We Saw, We Were Conquered by Fordham’s Apathy Toward Classics 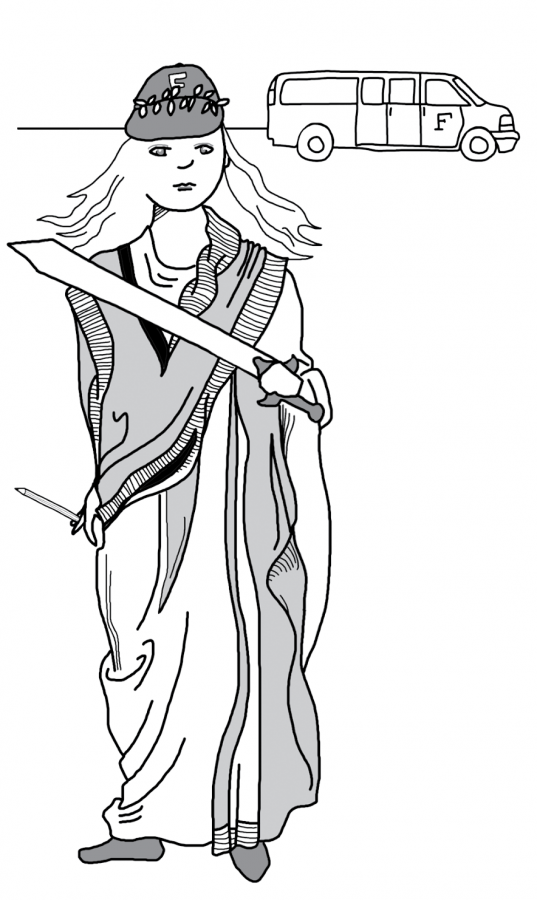 Who needs people like Aristotle, Plato or Cicero when you have obvious political and ethical experts such as our country’s president?

How many majors does Fordham Lincoln Center have? At least one more than you thought. Classics majors do exist at this newfangled campus; even without the hallowed, ancient halls of Keating, we survive. We’re there, hiding behind the business students with their suits and AirPods Pro and the new media and digital design majors with their computers. What are computers, we ask — we know only of papyrus.

The most common response to “I’m a classics major”? “I took Latin, but I hated it.” This is reassuring for classics students and faculty, as well as administration. When considering budget costs, they wonder, who needs to teach Greek when they could fund eight electric vehicle charging stations or inconsistent floor renovations? After all, Latin isn’t useful to a Jesuit, Catholic school. There is no Latin in our school motto, nor are many of our majors based on classical ideas.

Where would philosophy, Romance languages, the vocabulary of medicine and science, or even Western civilization be without classics? We most-beleaguered classics majors are the only thing between advancement and complete anarchy.

In what other class would you learn about war and slavery before learning how to count?

Who needs people like Aristotle, Plato or Cicero when you have obvious political and ethical experts such as our country’s president?

Classics informs its students about the perils of repeating history but sends them on other perilous journeys along the way. As a classics major, I spend most of my days at Rose Hill — not of my own volition, mind you, but because the major is barely offered at Lincoln Center. Fordham’s website lies when it says that classical languages is a major here since I have taken the Ram Van every day for two semesters in a row. My major classes are rarely, if ever, offered at Lincoln Center. It’s a dead language and a dying major.

Furthermore, Latin classes are “filled” (to call them “full” would be a stretch) with either pre-law or pre-med students whose mothers told them it would be helpful for their careers, or Catholic high school graduates who don’t want to speak a language to fulfill the requirement. Every decade, there might be a classics major in the class who is taking it for fun, but don’t count on that.

Studying classical languages means learning Greek — why do we learn Greek if Fordham has no fraternities? The only reason people learn the Greek alphabet is for frat initiation, so who cares about Achilles’ latest fling in “The Iliad”?

Major fairs are a hoot with classics. Stuck next to communications, we see hopeful students walk up to us and say hopefully, “I’m looking for digital technology,” to which we must respond that instead of media studies, we have a lot of interesting vases and some poetry.

Sadly, Fordham Lincoln Center classics majors are a dying breed, largely due to habitat loss. Our 40 majors have dwindled to 10 in the past few years because Lincoln Center is a hostile environment to the sensitive classics major. We require oddball aged professors, homework that’s either a shopping list or an incantation, and non-alcoholic, sexually restrained bacchanals.

We Lincoln Center classicists demand equality in campus locations. We need more classes offered in classics, from more on gender and sexuality to others on Greek comedy, and maybe a course on Percy Jackson to boost interest and teach myths simply. Finally, we could use some respect from our peers and faculty who think we read 18th century literature — “classics” is a bit older than that.

Support your local classics majors by slipping some denarii for us under your nearest dean’s door.