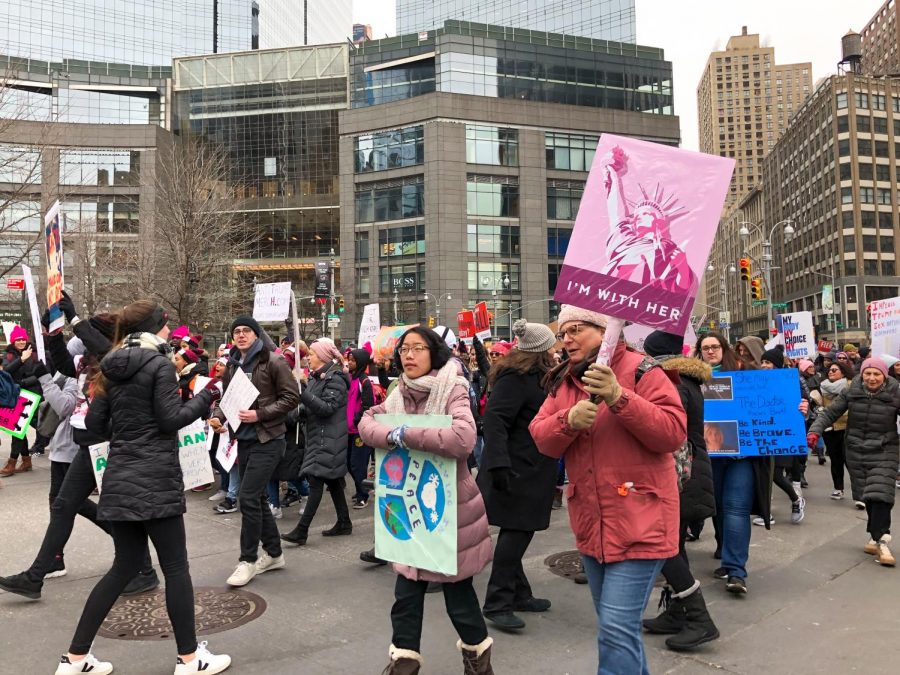 Protesters march on Columbus Circle with homemade signs and posters.

Hundreds of people gathered on the morning of Saturday, Jan. 18, despite freezing temperatures, for the city’s annual Women’s March. Demonstrators gathered at Columbus Circle, minutes away from Fordham Lincoln Center (FLC), and downtown at Foley Square in a massive show of support for women’s rights.

On West 72nd Street, Women’s March Alliance (WMA) protesters began gathering as early as 10 a.m., bundled in layers to brave the cold donning pink pussy cat hats and posters with feminist quotes. As the march began, demonstrators chanted “No justice, no peace!” while marching toward the Trump Hotel down Central Park South.

Many Fordham students were alongside the hundreds of demonstrators. “I went because I wanted to be a part of this great group of strong and powerful women who are not in anyway afraid of fighting for their rights,” said Maya Nayman, Fordham College at Lincoln Center (FCLC) ’23, who joined the rally in Columbus Circle.

The 2020 WMA march theme was “Rise and Roar,” as Co-Chairwoman Arzu Brown explained, “We have to roar, have to be heard, and it resounds to make sure it makes an impact.” The march organizers focused on issues including reproductive rights, the impeachment of Donald Trump, #MeToo Movement, environmental justice, gun control and immigration.

People of all ages marched alongside each other, holding signs with slogans like “A Woman’s Place Is in the White House” and “Impeach, Remove, Imprison.”

“My favorite moment was watching so many young girls lead calls for change. It was inspiring seeing someone so young out there in the cold fighting alongside the rest of us,” said Jayda Jones, FCLC ’23.

Another Fordham student, Isabella Gonzalez, FCLC ’23, said that she will always remember “walking by Radio City, chanting in the snowstorm. I’m glad I went because I felt more empowered (and cold) than I ever could have imagined.”

On the same day, 180 other similar marches took place around the country and the world, from Washington, D.C., all the way to New Zealand.

Unlike many other cities around the United States, the New York WMA march is not connected to the national Women’s March organization. After accusations of anti-Semitism and financial mismanagment in 2019 and original Co-Chairs Bob Bland, Tamika Mallory and Linda Sarsour stepped down, WMA decided to sever ties.

Maria Acosta, FCLC ’23, decided to go to the Women’s March NYC. She said that the march was important because “power in femininity, no matter what you believe in, is everywhere and would be everywhere.

“That’s what we saw at the march, young girls, boys, adults and grandparents from all backgrounds striving to take control of this power in our terms and not terms subjugated onto us,” she continued.

Although there were two separate marches, organizers emphasized unity and camaraderie among the activists regardless of the group with whom they marched.

However, many have seen the division as a major setback for the Women’s March movement and highlight the falling attendance rates between the first march in 2017 and 2020. While the first Women’s March on Washington, D.C., in 2017 is considered to be the largest single-day protest in American history, turn out significantly dropped this year.