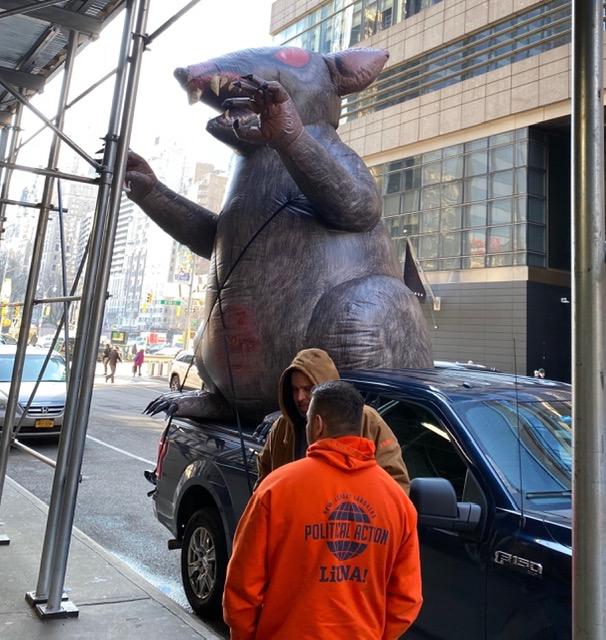 The giant inflatable rats, like the one currently at Columbus Circle, are often referred to colloquially as "Scabby" or "Scabies."

Affectionately called “Scabby,” or “Scabies” by some (a play on words between “scabies,” a contagious itching disease, and strikebreaker “scabs”), giant inflatable rats have been a commonly used trade union tactic for several decades.

This inflatable rat is advocating for the safe removal of asbestos, a silicate mineral strongly linked to respiratory disease and cancer.

Since the late 1990s, union asbestos handlers in the New York City region have been using union rats accompanied by “Asbestos Kills” signs to protest the use of non-union contracts, arguing that only union-trained workers understand New York State’s 221 pages of safe asbestos removal requirements.

The Laborers’ International Union of North America (LiUNA) Local 78, a union for hazardous waste handlers in New York City, Long Island and New Jersey, is protesting the hiring of Alba Environmental, Inc., a non-LiUNA Local 78 contractor, to remove the asbestos at 1841 Broadway, a building slated for demolition.

The 1841 Broadway building was built in 1924, at a time when asbestos was a common building material. Before the buildings prepared for demolition, it included tenants such as Gabriel’s Restaurant and a Starbucks.

The building’s owner, Global Holdings Management Company, seeks to replace the building (and its neighbor 1845 Broadway) with a 24-story mixed-use building.

Members of LiUNA Local 78 carry out around 90% of asbestos removal contracts in the area.

While these inflatable rats have become common around New York City, many are still confused about what the symbol stands for.

“I see the rats around the city, there’s one by where I work as well. I know they are protesting something, but I rarely know exactly what,” said Errat Katyrdzhyogly, Gabelli School of Business ’21. “I think if they want to be more effective they need to do more,” he said.