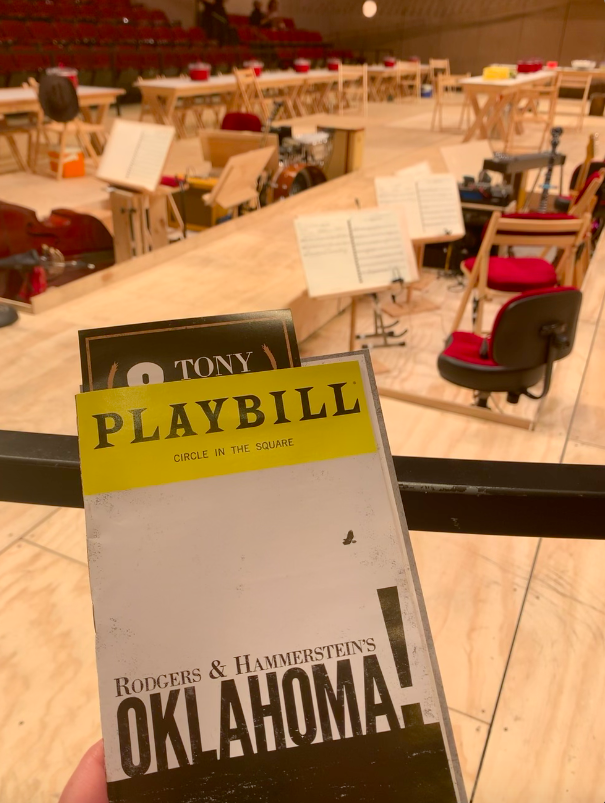 The reimagined "Oklahoma!" has taken a new look at its time-honored main characters.

Circle in the Square’s revival of “Oklahoma!” has been praised by many, and rightfully so: This is possibly the most transformative production of a Broadway classic. Daniel Fish’s direction allows the cast to make their characters personal and specific, a far cry from the broad Americana ideals they often represent.

Taking place at the turn of the 20th century, the plot centers around a box social at which a small town bids on lunches to raise money for a schoolhouse. A young woman, Laurey, has to decide who to let take her to the party: Curly, a strapping yet cocky cowboy, or Jud, the brooding farmhand who lives on her estate. In traditional stagings, the obvious choice is Curly, with whom Laurey has playful flirtations. Jud exists as a threat to her feminine purity, the obvious villain of the show.

This production turns these conventions on their heads: Damon Daunno’s Curly is slinky and dark, Rebecca Naomi Jones’ Laurey is sensible and self-aware, but the most moving character is even further from his archetype: Patrick Vaill’s Jud Fry. While often portrayed as ogreish and animalistic, Vaill manages to imbue incredible humanity into his character. However, it is too simplistic to reduce the performance to how it affects the canon of “Oklahoma!” — this exploration of Jud Fry has raised questions about manhood, community and the contemporary concept of what makes a person problematic.

The most immediately obvious change in this stripped-bare production is a Jud/Curly scene in Act 1. The theater is plunged into complete darkness. Jud’s first real dialogue happens and Curly’s more sinister side emerges. He sings “Pore Jud is Daid,” in which our strapping lead attempts to convince Jud to commit suicide. Curly paints a picture of Jud’s funeral, suggesting how loved he will be after he dies.

The traditionally-beloved character eggs on the outcast, romanticizing his death. A night-vision camera zooms in on Vaill’s face as tears stream down it, alternating with brief smiles as he imagines the rousing funeral which would follow.

As the light from the projection illuminates the theater slightly, you see how closely Jud and Curly are sitting next to each other, sharing a microphone. A near-kiss between them sends nervous giggles through the audience. Curly cruelly toys with Jud’s emotions in this intimate setting that mixes fear and closeness. The man the audience is supposed to root for is exposed as a conniving bully, and the perceived “villain” is humanized. The scene is shocking, disturbing and homoerotic, a perfect representation of the seductive tension that pervades this production.

Vaill’s mesmerizing movements are on full display as the camera catches every facial twitch. Even when he is just sitting onstage, silently ignored by the rest of the characters, his expressions change: a small smile as he is enraptured by Laurey’s confidence; a protective sneer when Curly pursues Laurey; incredible joy when someone makes a joke and he feels like he gets it and he’s a part of something, and then a halting twitch as his face breaks and he looks downwards, falling back into his place in society as the outcast.

One reason why Jud has not left my head is his complexity, especially with the critical eye people finally have on predatory men. However, the way Jud is presented for much of the first act proves he is no worse than the other men in the show, highlighting the larger masculine culture from which he was formed. A man like Jud is not created in a vacuum. His dangerous behavior is learned from the other men in the community. Jud is simply the villain because that is how other characters treat him, but what makes him actually dangerous is what he has internalized from others.

Of course, this would not be “Oklahoma!” if Jud did not end up defeated. This production changes no lines in the text. While his villainous qualities aren’t black and white, he certainly is creepy. He yells threatening comments about and at women in rage at the lack of control in his life and his failure to measure up to his peers. But this is not to excuse this behavior: the female perspective is clearly highlighted in this production. As a woman, Laurey gives cues that Jud is potentially dangerous, and she fears being alone with him.

In other interpretations it seems like this is the same fear everyone else has of Jud, born out of him being a big, scary outsider. But Jones’ delivery of her fears strike deep with their sincerity. The implication of not wanting to be alone with a man is to be taken seriously. But because she is a thoughtful and careful character, her unspoken desire is not out of the equation. If we trust her judgment, Jud offers her something other than fear. Why else would she hesitate to be with Curly? This culminates in another incredibly complicated scene, set completely in the dark.

Jud and Laurey share an intense, heated, short makeout session, until we hear the clang of a belt buckle, after which Laurey stomps away. “Not good enough, am I?” Jud says sadly, before exploding into anger. The recognizable sexually entitled male finally emerges. This is congruous with the image of Jud as an obsessive and possessive man. In this new context, we see this is not all he is.

While we can and should fault Jud for his actions, we can also acknowledge why they happen. Isolation is a powerful and damaging tool used to exclude people. This may be why critics have labeled Jud as a school-shooter type, as Vaill’s character choices reflect the face of danger we see in our world. But watching his journey throughout the show reveals a man in a society that teaches us to value men’s desire above all things, even women’s safety.

“Oklahoma!” closes on Jan. 19, so there is still time to head to the Circle in the Square Theatre to see this chilling and thrilling production. Lottery tickets are also available.