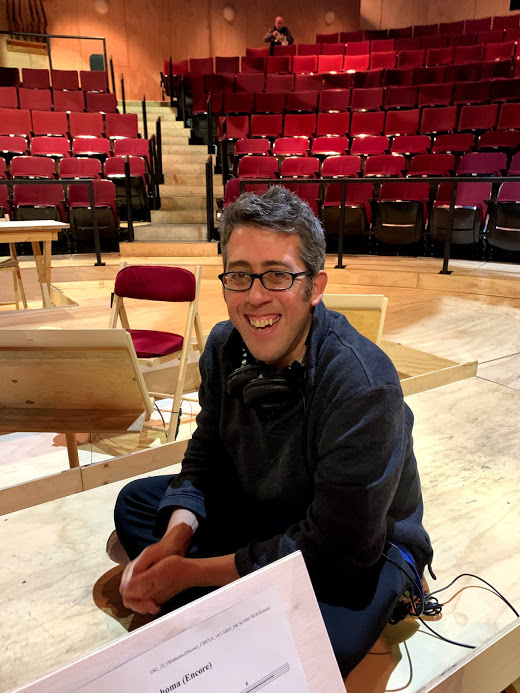 Joseph Brent, the mandolinist for the "Oklahoma!" revival, has been with the show since its beginnings.

Leaning against the doorframe of a Broadway dressing room, Joseph Brent got a little misty-eyed. His friend and current star of “Oklahoma!” Rebecca Naomi Jones just booked the upcoming Aretha Franklin miniseries on National Geographic. He congratulated her profusely and then turned to me: “When you know someone for a long time and see them get the recognition they deserve, it’s just really beautiful to see.”

Brent plays mandolin onstage at Circle in the Square Theatre in “Oklahoma!” eight shows a week. If you don’t recall hearing a mandolin among the grand, sweeping orchestrations of this 1943 golden-age musical, you’re right. In this version of “Oklahoma!” the Rodgers and Hammerstein score was pared down to an eight-piece band, similar to what one would find on the actual western frontier. He has been with this production since it played at Bard Summerscape in 2015, turning down other Broadway offers to stick with the band.

One of the most successful mandolin players in his field, Brent knows the struggle of performance as a career. He’s played onstage with international orchestras, Broadway shows and recording artists such as Regina Spektor. His perspective is a unique one, which he shared over poke before his evening show. Fittingly, he chose the poke place for its taste in music. He bopped along, gray hair flopping, as he told me about how he ended up in my favorite show on Broadway.

Brent’s road to “Oklahoma!” has been paved with a myriad of experiences. After attending Berklee College of Music, he went to Italy and trained under a classical mandolinist. Since then, he’s played in the orchestras of multiple Broadway shows including the original “Spring Awakening” in 2006. Opportunity comes in many forms, but most often through connections.

“So, me and Nathan (Koci), the music director, we did a Shakespeare in the Park production, ‘Much Ado About Nothing,’” he said. “The band was just me and him and a clarinet player.” While playing the beautiful Italian music, they cultivated a friendship would last all the way to Broadway. He still has the voicemail in which Koci asked him to be a part of the Bard Summerscape project.

“Oklahoma!” is a reinterpretation of the classic American show, stripped of its pomp and flair to reveal the dark underbelly of the Old West. The ensemble alone is usually 20 members, but in this production, the whole cast is just 12 people. In this space, everything on stage is purposeful and specific; the band is part of the show. While the band is not involved in the action except in a throwaway line or two, they have to stay engaged. Joseph recalls director Daniel Fish telling him, “You’re aware of the show, you’re watching, don’t ever zone out, but don’t, like, act.”

This show has been unique for him because of how involved the band was from the very beginning of the rehearsal process. It was tedious, yet rewarding. “At the time, I was going out of my mind, but now looking back and it seems tremendous to be able to do that process and see it all,” he said.

He recalls the first note the actors were given: “‘From the moment you walk out, the audience needs to know that someone is going to f— and someone is going to die.’ Things like that, the band would never see because we usually come in right at the very end.”

Brent has traveled in many different kinds of performing circles, but he sees similarities between the various performers he has worked with. He’s got his foot in many doors, and touring with major artists taught him the power of a name. “I got to see what happens when suddenly, it’s your name on the ticket for the hundred thousand people out there.” Artists feel the pressure of delivering a performance worthy of that kind of audience. He even sees it with the leads of “Oklahoma!” “When it’s your name and face on the bus, you don’t want to disappoint them.”

He and his band, 9 Horses, visit college music programs around the country. In these academic residencies, they lead workshops, encouraging young artists to create for themselves.

His goal is to relay examples of what artists come across that you would never learn in an institution. “In one class, I send you a text or an email offering you a gig, and you’re graded on how quickly you respond: ‘Oh, my God,’ or ‘When I can do it’ or ‘I can’t do it.’”

Another class is Knowing Your Worth. “We do a couple recording sessions and ask how much you charge. Especially in a creative business, when you might be working with friends, you need to get paid. You have to learn to do things yourself and collaborate.“ When he heard about Ramses Records, Fordham’s student-run record label, he lit up.

“I absolutely love it,” Brent said. “There’s nothing better than diving headlong into the music industry. Instead of asking, ‘How do I do it?’ start doing what you do.” He said his advice doesn’t necessarily only apply to performers or musicians. “Technology and reach are widely available. You can make a TV show and put it online; you don’t have to wait for opportunities. When the opportunities come, you will be ready for them.”

“You go from playing a sidewalk cafe to, like, three people, and then you’re on tour with Regina Spektor. You’ve got to be ready for that to happen,” he said. “A lot of people get to a studio for the first time and they suck because it’s their first day on the job. If you figure out the skills you’ll need and not rely on someone to teach you, you’ll be ready for that opportunity.”

9 Horses’ latest record, “Blood From A Stone,” was just released on all streaming platforms. “Oklahoma!” is on Broadway until Jan. 19.