Deadly Equivalency: How ‘Balanced Journalism’ Can Be Anything But 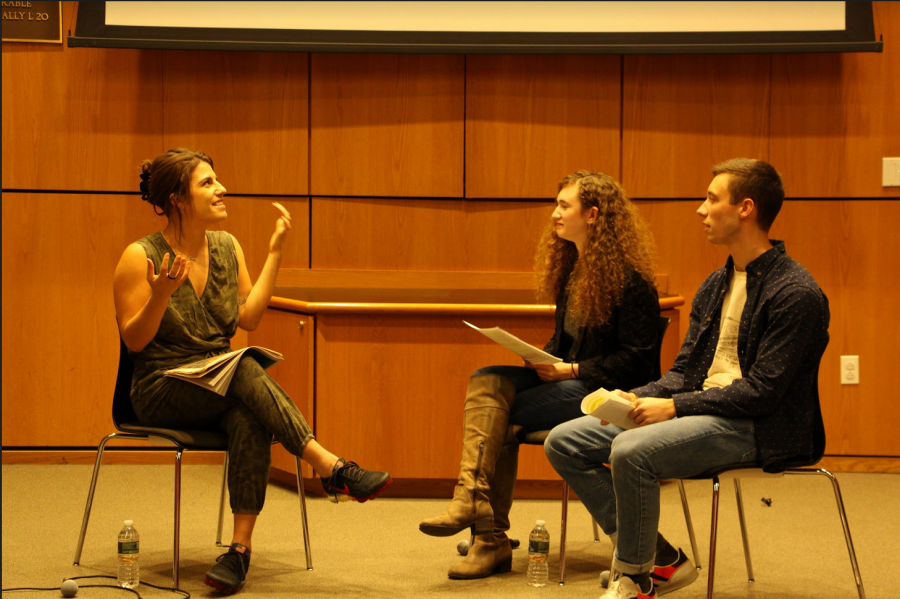 Journalism personality Lauren Duca, seen here in a Nov. 8 interview at the McNally Amphitheatre, protested "both-sides-ism" at a recent Fordham journalism conference, where pundits give unfair weight to dubious claims in the name of equality.

On Nov. 4, Fordham’s Department of Communication and Media Studies — along with New York State Associated Press Association and WFUV — hosted its third annual “Future of Journalism” conference, featuring guests such as author and journalist Lauren Duca and Media Matters president Angelo Carusone. In a break-out session with the two, a discussion about “The Perils of Bothsidesism” revealed sobering facts about how topics like climate change are treated by many mainstream media sources, and how two opinions are given false equivalency — despite one lacking any kind of substantial scientific grounds.

Carusone mentioned how U.S. news specifically creates space for dissenting articles any time a climate change piece is published — treating this topic like any other political debate, with two sides that may be contested. Denial of human contribution to climate change is seen as no more than a dissenting political opinion because the implications involve policy change. This false equivalency actively ignores the reality that mountains of evidence supports.

The facts are readily available to anyone with internet access. Search “climate change facts” and you are led to NASA’s website, which reads, “Multiple studies published in peer-reviewed scientific journals show that 97 percent or more of actively publishing climate scientists agree: Climate-warming trends over the past century are extremely likely due to human activities.”

In an article in The Guardian, journalist Dana Nuccitelli discusses the various fallacies in climate deniers’ rhetoric. He describes “a common denier argument that consensus should be measured by comparing the number of papers explicitly endorsing the theory to the total number of papers examined. By that measure, 0 out of 331 geology papers endorsed the theory, meaning the consensus is 0% and clearly plate tectonics is a hoax.”

Fox News is a huge perpetrator of irresponsible journalism as they continue to peddle misinformation about climate change. Weather forecaster Joe Bastardi once came on as a guest to say that carbon dioxide “literally” cannot cause warming because it doesn’t mix well in the atmosphere. He also claimed that “in the entire geological history of the planet, there has been no known linkage between CO2 and temperatures.”

Climate change denial is not a political opinion deserving equal recognition, but instead a dangerous misinformation campaign that actively misleads the public. Giving it airtime on national television is irresponsible journalism and completely abandons the normal duties of the press to inform the public and do so with integrity.

When presented with numbers and figures, the response from deniers is emotionally charged —  exactly what would happen when political ideology replaces critical thinking. To quote Candace Owens, a conservative speaker and activist, in her interview with Joe Rogan after she was presented with the same facts listed above, “I just don’t believe that.”

Opinion begins when we try to think of creative solutions to this intense issue. Whether the issue exists or not is in no world a valid topic for debate. This public acceptance of the denial that humans have a negative effect on the climate sets a very dangerous anti-scientific precedent.

If we care at all to change the direction of these discussions, we must abandon the idea of “belief” in this completely. Point to the bounty of facts, and revive the idea that we, ordinary people, who are not scientifically literate, must trust the experts who do painstaking research to gather this information. This is not a two-sided issue because this issue does not have sides at all. We have the facts, and it is up to us to either heed them, or bear the consequences of ignoring them.

Putting our trust into experts — and not political pundits — will be the force that changes the fate of climate justice, and help more people see it as not a political talking point, but a worldwide issue that requires nonpartisan cooperation.