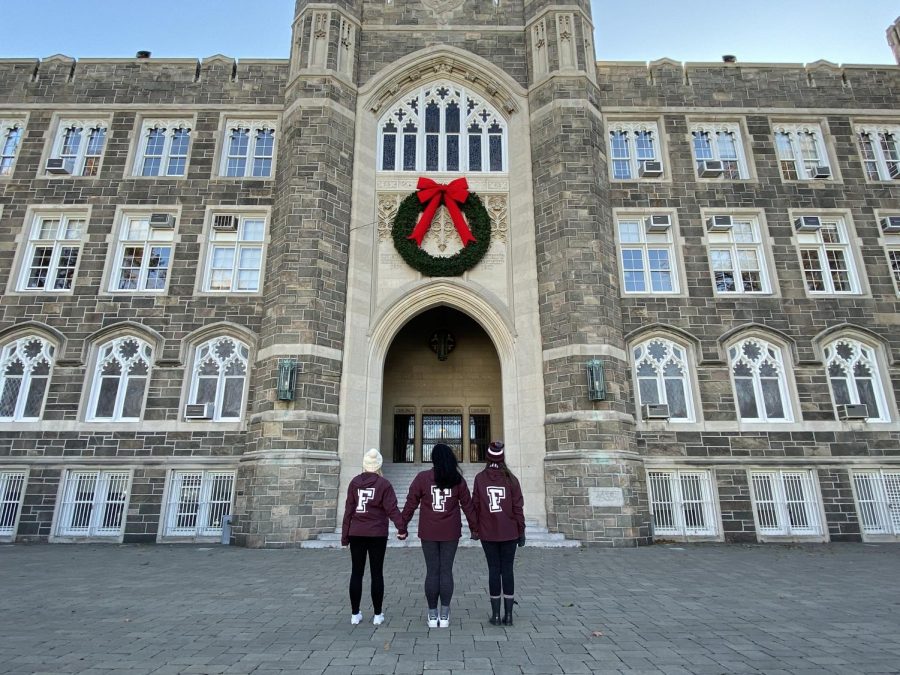 Lincoln Center students still engage in Homecoming festivities at Rose Hill, despite it not being their "home" campus.

“WE ARE Fordham.” Every new student at Fordham University is greeted by an Orientation Leader wearing a maroon shirt with this slogan. It’s the chant taught to the freshmen by University President Rev. Joseph McShane, S.J., on opening day at both Rose Hill (RH) and Lincoln Center (LC). In four years, we will come together on Edwards Parade to graduate with a degree from Fordham University. But what about until then? What separates the two campuses besides a Ram Van speeding down the West Side highway?

“Oh, people straight up told me about the rivalry. Everyone: faculty, students,” Laura Auricchio, dean of Fordham College at Lincoln Center (FCLC), said on the relationship between Rose Hill and Lincoln Center. Auricchio has been the dean of FCLC for only four months, and the campus culture was brought up almost immediately during her first days in office.

The “us” versus “them” mentality is ingrained in the student body as well. “I remember being at Rose Hill, and I remember people talking about ‘Lincoln Center’ people. There’s a definite bias on whatever campus you’re on,” said Evie Taylor, FCLC ’21, who transferred from RH the second semester of her freshman year.

Despite the administrations’ persistence that “New York is our campus, Fordham is our School,” and that we are one big, happy ramily, there is an obvious divide between the campuses.

For decades, Fordham’s mascot, Rameses, was kidnapped by our athletic opponents, yet Fordham University’s most palpable battle is internal. Where does this rivalry come from?

The college that would one day become Fordham University was founded in 1841 at Rose Hill Manor in what was then Westchester. In 1916, Fordham’s graduate and professional programs expanded into Manhattan, constantly relocating to various places, including the Woolworth Building, throughout the 1900s. It wasn’t until the 1960s under the presidency of Rev. Laurence J. McGinley, S.J., that Fordham Lincoln Center even existed. “Without a doubt the single most important contribution that McGinley made to Fordham University was the establishment of the Lincoln Center campus in Manhattan,” Thomas J. Shelley, professor of history,  wrote in his book “Fordham, A History of the Jesuit University of New York: 1841 – 2003.”

The College at Lincoln Center

Fordham’s online presence may perpetuate this conflict. On the @fordhamadmissions Instagram, whose bio states, “Follow to learn why #WeAreFordham,” there were stories answering questions like “Why did you pick Rose Hill over Lincoln Center?” and vice versa posted during the President’s Open House programs at both Rose Hill and Lincoln Center by student ambassadors from each campus. Furthermore, a look into the online accounts for campus organizations reveals that RH clubs are predominantly branded ‘Fordham’ (i.e. @fordhamusg, @fordham_cab) versus LC clubs (i.e. @fordhamusglc, @cablc_fordham).

Is LC not Fordham?

Auricchio says it is ingrained in our history. It was Fordham’s graduate and professional schools, like Fordham Law School and the School of Social Services, that began the expansion of Fordham University out of the Bronx, comprising the assortment of Manhattan-based graduate schools nicknamed “Fordham Downtown.” The dream of an undergraduate liberal arts school was only realized when “Fordham Downtown” received plans for a campus of its own at Lincoln Center via a conversation between McGinley and the controversial Robert Moses.

The Liberal Arts College was established in the fall of 1968 — with a vastly different curriculum than its uptown counterpart, Fordham College, as Fordham College at Rose Hill (FCRH) was then referred to. So different, that in 1976, “at the request of the admissions office, who wanted more distinction of the school, they changed the name to the College at Lincoln Center” (CLC) as chronicled by the Rev. Robert R. Grimes, S.J., former dean of FCLC, in his book written for the 50th anniversary of the campus, “A History of Fordham College at Lincoln Center.”

Auricchio said that between the two colleges, “There were times of coming together, and times of wanting to celebrate their differences.” For much of LC’s history, it was the latter. Up until the late ’90s, LC and RH’s curriculum and faculty were two completely different entities, including an honors college with a curriculum with a “distinctly Lincoln Center feel.”

CLC also boasted the 1998 establishment of the Fordham/Ailey BFA dance program and the theatre program. Grimes also recounts a moment of proof of the campus rivalry’s longstanding history when an unnamed Rose Hill faculty member and “frequent critic of (FCLC),” upon seeing Ailey dancers perform, said “that he had no idea that Fordham did anything that well.’”

In May 1994, during a huge restructuring, the Board of Trustees renamed CLC to Fordham College at Lincoln Center. The administration merged the faculties of the school and established the core curriculum that we know today. The decision was contested by various parties, but academic parity between FCRH and FCLC is still a mission of the university and Auricchio today.

Today, we have Fordham College at Lincoln Center. “Academic parity is a goal, but not campus parity. At Rose Hill, you have the football games, but at Lincoln Center you have (the Fordham/Ailey BFA program). They’re two different types of campus experiences, but are equally wonderful,” Auricchio said.

The emphasis on campus — the culture of the students and the ethos of the school — seems to go hand-in-hand with the physical space of Lincoln Center. “That’s what I love about Fordham — I feel like our students are out in the city, and our campus puts you out in the city without throwing you out into it. The plaza is like an oasis,” Auricchio said. “I notice the little pockets of bonding out on the plaza and gathering in the elevators, but everyone is still taking advantage of the city. Students have the best of both worlds.  There is a place to gather and find community and if you ever feel claustrophobic, you have the opportunity to walk away.”

We forget how new the LC campus we know today is — Argo Tea and the Garden Level lounge didn’t exist until the renovation of the 140 West Building in 2014. The first class to sleep in McKeon Hall graduated in 2018, and the first class of the Gabelli School of Business at Lincoln Center didn’t graduate until last year. Lincoln Center students did not graduate at the Rose Hill campus until 2003. The diploma ceremony previously took place at Avery Fisher Hall, now David Geffen Hall, the home of the New York Philharmonic.

“I chose Rose Hill primarily because of the campus; I loved the greenery,” Natalie Migliore, FCRH ’20, said, on why she chose Rose Hill. “I was also under the impression that Lincoln Center was primarily for graduate school. I was aware there was a small undergraduate school, but I didn’t want small.” It’s true, in the 1990s, “at Lincoln Center adult education … had become the heart of the college,” Grimes said in his book.

The appeal of “Fordham Downtown” was the accessibility of the Manhattan work experience. John F. X. Finn, the dean of Fordham Law School at the time, oversaw the move from the Bronx to Manhattan in the first year of the law school’s establishment. Finn prioritized the opportunity for part-time law students to work in Manhattan law firms according to Shelley. Finn would be glad to hear that the appeal of internships still rings true. Iman Kamel, FCLC ’20, transferred to LC from RH during her sophomore year. “I wanted to start interning; I wanted to be involved in the city,” she said.

“I feel like there’s a common thread amongst us at Lincoln Center — we’re all such go-getters,” Taylor said.

Kamel and Taylor are among the long history of Fordham students who discovered that the right campus for their desired college experience was not the one in which they were initially enrolled. One such student transferred from Rose Hill to Lincoln Center to study theater — Denzel Washington, CLC ’77. Today, he is one of Fordham’s most notable alumni.

The rivalry today is undeniable. People outwardly express it to the Dean of FCLC. However, the rivalry is living history of a university that grew outward, each New York City campus developing a reputation all its own. “Despite the rapid growth of the Lincoln Center campus, Rose Hill remained the historic and symbolic home of Fordham University,” Shelley stated. Although Keating Hall is the image many associate with Fordham, Lincoln Center is a symbol of Fordham’s legacy of growth and adaptation in an urban setting.

Auricchio, hailing from the New School, contrasts the community she sees at Lincoln Center to other urban campuses. “Move-in day at McKeon was one of the most joyous experiences I’ve ever witnessed. The student community here is remarkable.”

Auricchio has also experienced post-graduate Lincoln Center pride firsthand. “The alums I meet are living artifacts of that history.” Auricchio described how Lincoln Center graduates always introduce themselves as “from Lincoln Center,” whereas RH graduates say they are simply from Fordham.

Rose Hill may be Fordham, but WE ARE Lincoln Center.