Mind Your Ears When You Mind the Gap: Hearing Loss Facts 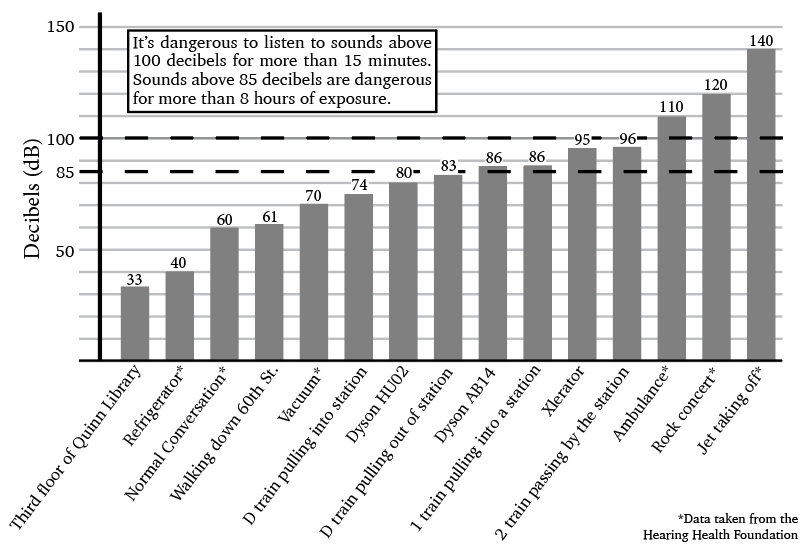 Our ability to hear is easy to take for granted, but anyone can develop hearing loss, and loud sounds within and around Fordham Lincoln Center (FLC) might be hastening symptoms of noise-induced hearing loss (NIHL) among students, faculty and staff.

There are two types of NIHL. It’s possible to lose your hearing all at once, which occurs in response to extremely loud sounds, or hearing loss can manifest over the course of years. Exposure to loud sounds for significant periods of time every day can cause the progressive form of NIHL.

NIHL affects somewhere between 10% to 24% of Americans, according to the National Institutes of Health. The World Health Organization (WHO) reported that 1.1 billion teenagers and young adults in developed nations are at risk of losing their hearing due to overuse of headphones and overexposure to high levels of sound at “nightclubs, bars and sporting events.”

According to the National Institutes of Health, long term exposure to noises at or below 70 decibels are unlikely to contribute to NIHL. The sound level of normal conversation usually doesn’t exceed this amount. In contrast, hearing sounds 85 decibels or higher for large amounts of time can cause NIHL.

The amount of time you spend hearing loud sounds is also an important factor in NIHL. The WHO does not recommend listening to sounds over 85 decibels for more than 8 hours at a time, and they recommend limiting exposure to sounds above 100 decibels to no more than 15 minutes.

NIHL is permanent. NIHL stems from the loss of specialized cells, called hair cells, in the ear that send auditory information to the brain. Constant exposure to loud sounds can damage and kill hair cells. In humans, hair cells cannot regenerate, so the amount of hair cells individuals have will dwindle in response to recurrent exposure to loud noises.

Loud noises are everywhere, especially in New York City. To quantify these noises, I downloaded a decibel meter app called ‘db Meter,” recommended by the Hearing Health Foundation, on my iPhone to quantify the sound levels around Fordham. Take the data I gathered with a grain of salt, because noise levels can vary day-to-day and depend on the measurement tool you use.

The hand dryers in Fordham bathrooms are another source of loud noise capable of contributing to NIHL. There are three kinds of automatic hand dryers at FLC: Dyson’s HU02, Dyson’s AB14 and Xlerator. I measured three individual hand dryers to get an average sound level for each kind. The loudest is the Xlerator at 95 decibels. The HU02’s average is 78 decibels, and the AB14’s is at 86 decibels. All these sounds are above the critical level of 70 decibels, but are unlikely to cause permanent damage if seldom used.

Since NIHL usually progresses over a long period of time, it’s likely that individuals might not know they have NIHL until the onset of severe hearing loss. NIHL can become especially pronounced in old age, and individuals will eventually need hearing aids to help them communicate with others and hear sounds in their environment.

Some symptoms of NIHL might be more noticeable at first, though not everyone experiences these changes in their hearing. For instance, tinnitus — hearing a constant tone or ringing in one’s ear — can occur for a short or long period of time in response to a loud sound. In more serious cases, tinnitus can be permanent.

Individuals may experience temporary hearing loss for as long as two days after hearing an extremely loud noise. Studies indicate that though hearing seems to come back for some individuals, damage may linger in the ear.

Though hearing loss might seem inevitable when one takes into account the amount of loud noises individuals come in contact with on a daily basis, NIHL is not on the rise. In a study of 7,000 participants from the University of California, researchers did not find any significant rise in NIHL in spite of the rise in audio players. A study from the National Institutes of Health actually showed a 2% decrease in the rate of NIHL among adults aged 20 to 69; the researchers found this decrease between data collected from 1999 to 2004 and a separate data set from 2011 to 2012.

Although research might indicate that the prevalence of hearing loss is not increasing, it’s better to err on the side of safety. The National Institutes of Health recommends wearing earplugs at loud events. If controlling the volume isn’t an option, move away from the sound’s source. Most importantly, if you think you might have symptoms of hearing loss, get your hearing tested by a healthcare professional.