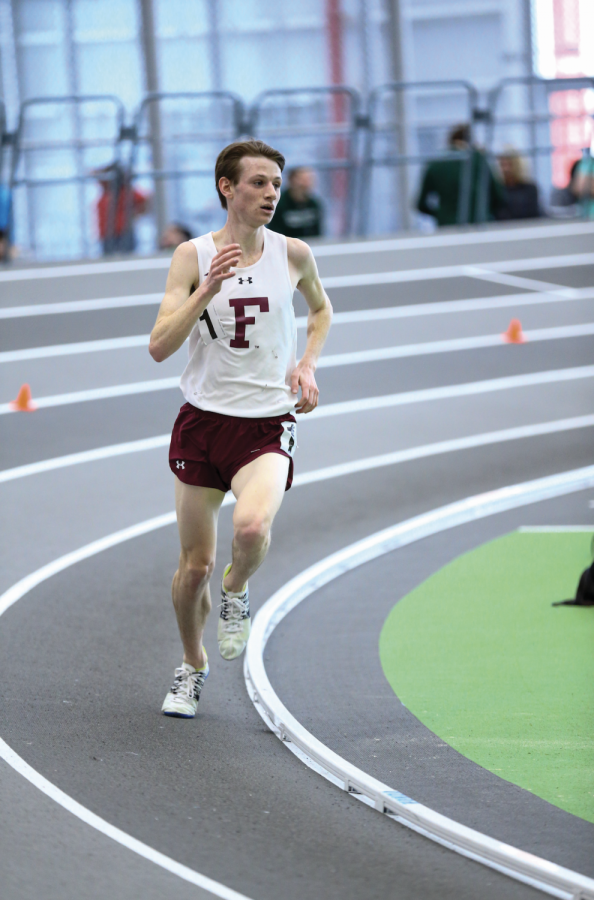 The close of the fall semester brings with it the end of cross country season — which means it’s time for track.

The cross country season finished for most Rams on Saturday, Nov. 23, at the Eastern College Athletic Conference (ECAC) and IC4A Division I Championships at Van Cortlandt Park — Fordham’s home course. The men’s team placed eighth out of 16 teams, and the women were seventh out of 18.

Ryan Kutch, Gabelli School of Business at Rose Hill (GSBRH) ’20, was not there to represent the Rams at IC4As. After finishing in fourth place in a time of 28 minutes, 52 seconds, at NCAA Northeast Regionals in Buffalo, New York, on Friday, Nov. 15, he qualified for the NCAA National Championship in Terre Haute, Indiana, which also took place on Saturday, Nov. 23.

Kutch finished the race and his season in 34 minutes, 48 seconds, and came in 241st place. He and the men’s and women’s teams will have a short break until their indoor season opener on Friday, Dec. 6.

Newly appointed head coach for Cross Country and Track and Field Brian Horowitz will continue to lead the Rams this indoor season as well as the team of eight captains across the men’s and women’s teams.

One of those captains is Kutch, who is among the team’s top returning competitors for the indoor season. Kutch clocked two personal bests during the 2019 indoor season in both the 3,000 and 5,000 meters. His respective 8 minute, 7 second, and 14 minute, 13 second, finishes also set school records across the two distances.

Captain Andrew Byrne, Fordham College at Rose Hill (FCRH) ’20, also took quite a few of the Rams’ top times last year. As a heptathlete, which means he competes across seven events, he took the top teams spots in the 60 meter high hurdles in 9.33 seconds and the high jump in 6 feet, 6 inches. His highest heptathlon score for the season was also Fordham’s highest with 4,821 points.

The men’s fourth captain Jack Keegan, GSBRH ’21, will look to take some more top times this season. Last year, he set personal records in the 500 and 800 meters.

Eleven freshmen joined the men’s track and field roster this year including Ryan Fahey, GSBRH ’23, who took one of the team’s top cross country finishes this season with a time of 23 minutes, 52 seconds. It will be interesting to watch his progression onto the track.

Regarding the women’s team, seniors Katarzyna Krzyzanowski, FCRH ’20, and Sydney Snow, FCRH ’20, will lead the team this season as well as juniors Dana Beggins, FCRH ’21, and Kathryn Kelly, FCRH ’21.

Snow and Krzyzanowski took two of the top five fastest 5k times this cross country season. At the Metropolitan Championships, Snow crossed the tape in a time of 18 minutes, 38 seconds, followed by Krzyzanowski in 19 minutes, 49 seconds.

The two seniors also finished with some of the team’s best times last indoor season. Both took two of the top mile times for the team, Krzyzanowski with a personal best of 5 minutes, 1 second, and Snow with 5 minutes, 10 seconds.

If Krzyzanowski races the mile this indoor season, it is likely that she will attempt to break the five-minute mark.

Krzyzanowski also left her name in the school record books last season in the distance medley relay, when she and her three teammates finished in 11 minutes, 44 seconds at the Atlantic 10 Championship.

Beggins and Kelly also made some impressive finishes during the 2019 indoor season, many of them personal bests and school records.

Kelly left last year’s indoor season with four new personal bests and a school record. In the 200 meters, she finished in 24.23 seconds, a new record for herself and Fordham.

Along with an impressive finish in the 60-meter dash, she was the team’s top jumper in the long and triple jumps. Her best long jump performance came to 18 feet, 7.25 inches and her triple jump was 37 feet, 2.5 inches.

In addition to the strong team of captains for the women this season, 11 freshmen also joined the roster.

Two of those freshmen took two of the team’s top cross country times this year.

Alexandra Thomas, FCRH ’23, had the fastest finish for the women’s team this fall with a time of 18 minutes, 32 seconds. She will certainly be one to watch as she takes to the track this indoor season.

Taylor Mascetta, FCRH ’23, was the team’s third best finisher in cross country this season, coming in just behind Snow in the rankings with a time of 19 minutes, 29 seconds.

The men’s and women’s teams will open their indoor season on Friday, Dec. 6 at the Lombardi Center Field House in the Bronx.