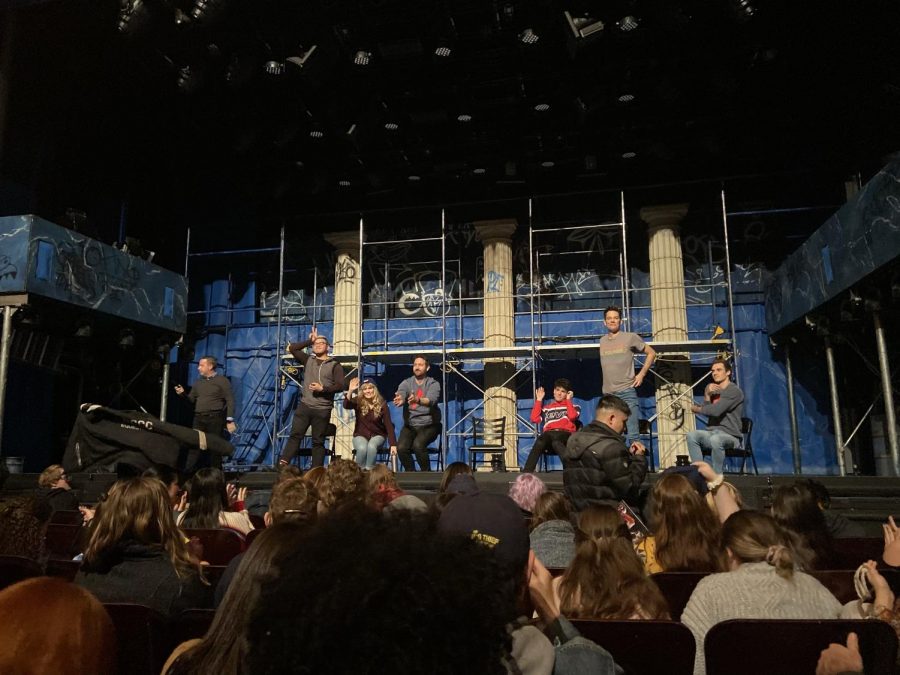 The actors in "The Lightning Thief" advised students to take initiative, seek opportunities and ultimately be themselves if they seek to pursue professional acting careers.

Usually, when I see a Broadway show, I am surrounded by mostly older, wealthier white couples, even when seeing works of theater meant for younger and minority audiences. However, at “The Lightning Thief” on Broadway’s college talkback night, I was among people my age and children attending with their families, and there was a noticeable amount of diversity. I heard a boy tell his parents how the show was going to recreate the part of the book where Cherry Coke falls from the sky. There was this unifying love among the audience for Percy Jackson, theater or both.

The high energy in the crowd definitely added to the actors’ energy onstage as well. The show itself is amazing. It tells the cute, hilarious, yet moving story about a group of misfit demigod teens banding together to take on whatever monsters and quests come their way. It is a show made solely to bring joy to its audiences, and it definitely succeeds in doing so.

Those who stayed for the talkback were a mixture of performance, tech, business management, and non-theater majors. It was mostly college students, but a few high schoolers and graduates were sprinkled among the crowd. The cast members that stayed to answer questions were Chris McCarrell (Percy Jackson), Jorrel Javier (Grover, Mr. D), Kristin Stokes (Annabeth), Ryan Knowles (Chiron and others) and Sam Leicht (Percy and Luke’s understudy), along with composer Rob Rokicki. They answered a range of questions from how the stage design and music styles were decided for each character, to how all of those sounds are made with a five-person pit band, to how many rolls of single-ply toilet paper they go through per show (the answer is seven, and they’re all recycled).

They were asked about the most important lessons they learned both from their college and post-college experiences. Knowles emphasized that whatever job you get, follow people with the most experience and learn from them. McCarrell talked about how auditions for a show in college in a low-populated area and auditions in a big city require completely different approaches. He said the benefits of being in a big city is that there are opportunities everywhere and much more ablility to refine your work to what you want to focus on.

Rokicki talked about the importance of technology such as YouTube and how to use it for exposure. Javier and Stokes touched upon how important it is to run oneself like a business. Javier advised students to be humble, but be confident in their abilities and take initiative, because no one else will do it for them.

The last question they were asked was: If they were sitting in the audience that night, what they would have wanted to hear from these Broadway actors? Javier started off with believing that you are enough, and always being the most authentic version of yourself, even if you don’t see other people who look like you on stage yet, which can make it that much harder.

Stokes emphasized that there is no one road to get to where you want to be, and you can never predict the road. She said to know what your goal is, she said, and say yes to all opportunities that will help you in any sort of way possible. Knowles said not to focus on other people’s successes, but accept who you are and what you want to do, and surround yourself with people who love you.

Rockiki and McCarrell ended by saying Broadway is not this strict, well-oiled machine, but absolutely accessible, and that putting in hard work and being your authentic self are the best methods of getting there. Finally, Leicht brought up that it’s okay to look for survival jobs and hobbies that you actually like to do on the side or when needed. The main lessons that the cast wanted students to take with them are that they should never sell themselves short and that if they put in the work and truly love what they do, that work will pay off, even though it may be in unexpected ways.