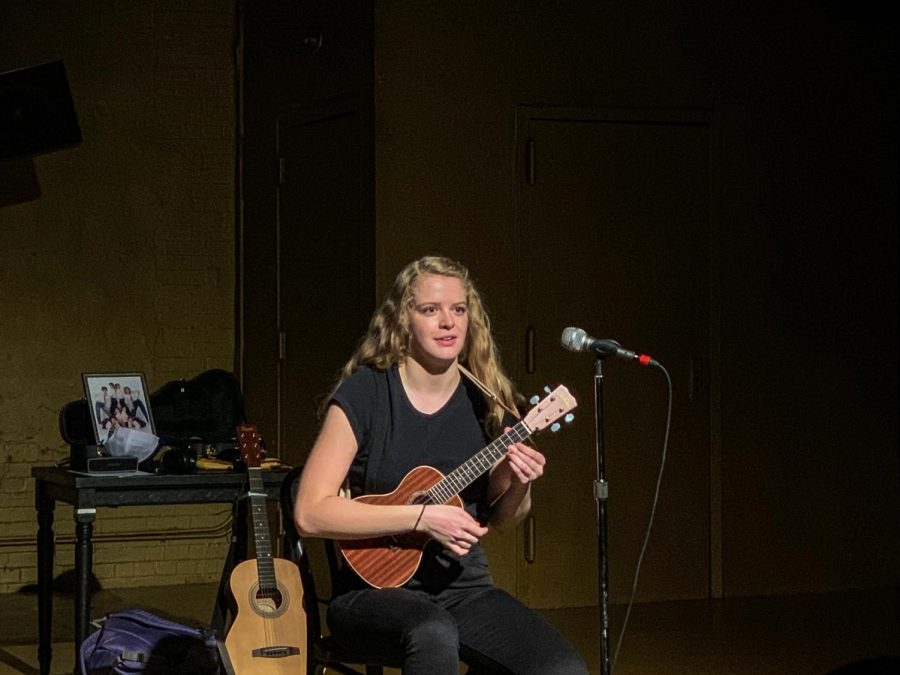 Ashley Everhart (FCLC) ’20 performed a wide variety of musical hits as well as her own music.

On Thursday, Nov. 21, Fordham Theatre Program’s Ashley Everhart, Fordham College at Lincoln Center (FCLC) ’20, presented “Only Time,” a one-woman comedy sketch show, at The Tank, an off-off-Broadway performance space. I didn’t know Everhart beforehand, so I went in with almost no expectations, yet she somehow managed to defy them. By questioning the lexicon used by lesbian characters in modern-day cinema, pretending to be a woman held hostage by the Spelling Bee and more, Everhart gives us a wild ride through her whimsical subconscious.

The comedienne deliberately avoided doing stand-up, as the genre relies on personal stories. “I wanted the audience to leave knowing me, but not knowing anything about me,” shared Everhart. “The only times when I told real-life stories was when Enya’s ‘Only Time’ played, yet I still tried to tell them not as me, but as a character.”

Enya’s “Only Time” is featured in the show an impressive six times. “When I was a kid, my mom was a big fan of Enya, and I would always listen to this song on a CD. ‘Only Time’ is both beautiful and funny. Its lyrics seem to mean nothing. It’s pensive, strange, ethereal and nonsense, how I wanted my sketches to feel like,” explained Everhart.

Everhart described herself as “a musician first,” and this background was evident through the abundance of music in the show. Apart from “Only Time,” the show featured “Love Will Keep Us Together” by Captain and Tennille; “Be My Baby” by The Ronettes; “My Sharona” by The Knack and “Could It Be Magic?”, both the Barry Manilow and the Donna Summer versions. Everhart also performed pieces she wrote herself: a rap about the New York Public Library card, a love song written to Wonder Bread and a pop hit that asks the question, “Would you like to rent my canoe?”

“Music is a fundamental part of every art form that we consume, “and it’s very funny when it’s used right,” Everhart noted. “I had a number of people approach me after (the performance) and tell me: ‘You can really tell your strange taste in music by this show.’”

The majority of Everhart’s audience, other Fordham Theatre students and friends from her outside performance work, knew Everhart as a virtuoso musician. She set out to defy their expectations by only performing simpler, deliberately imperfect pieces. Everhart only recently closed “Twelfth Night” on Fordham Theatre’s mainstage, where she performed a character who was a saxophone player. She felt a pressing need to step away from performing anything more than a simple tune on her saxophone in “Only Time.”

“When I step out onto the stage with a saxophone, people will think I’ll shred,” Everhart said. “So, they were surprised when I didn’t. There’s nothing funny about someone just doing something very well, and I decided to have fun, sing with a weird Irish accent.”

Everhart’s show seemed to flow effortlessly, and that’s what she wanted her audience to think. Yet, in reality, copious amounts of work went into making the show a success. Everhart had a 10-person team working with her, including Isabel Edwards, FCLC ’20, as director; Narushi Fukuda, FCLC ’23, as choreographer; Alex Alipio, FCLC ’22, as lighting designer with Will Rossiter FCLC ’23, as assistant; Lexi Spera, FCLC ’22, as sound designer; and Kathleen Curran, FCLC ’23, as production assistant.

“The funny thing about a one-woman show is that you can’t do it on your own,” Everhart joked, “and I can’t wait to get the team back together in the spring.”

With only one semester left in her college career, Everhart is determined to make the most out of it. She plans to workshop a new batch of routines over the Christmas break and return ready with a second installment. “I don’t have months anymore, so my main challenge will be if I can write 40 minutes’ worth of sketches in a month,” mused Everhart.

Despite the challenge, Everhart stays optimistic and inspired: “The fun thing about performing in a genre that doesn’t really exist — a musical comedy one-woman sketch show — is that I can write and do whatever I want.”

Everhart’s performance is truly one of a kind: a show that is filled to the brim with her spirit as an actor, musician, comedian and, like most of us, a strange human being.