Debating and Classifying the ‘Christmas Movie’ 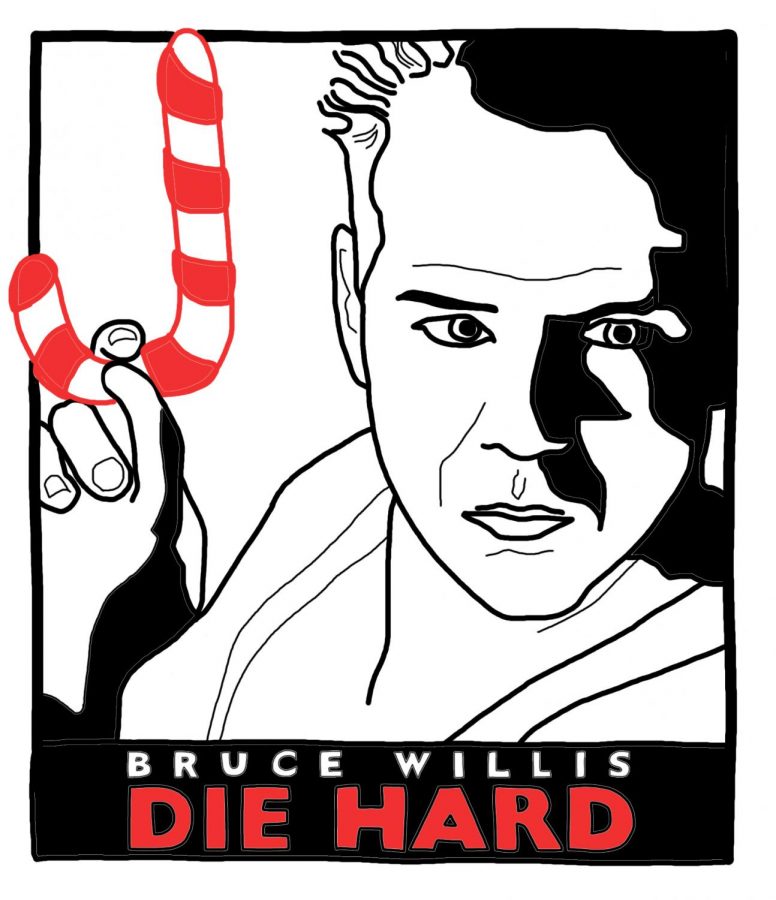 To some, the “I Have A Machine Gun Now Ho-Ho-Ho" sweater emblematic of "Die Hard" qualifies it as a Christmas movie despite its lack of holiday cheer.

There is no denying that Christmas is already in the air (as dictated by the return of Starbucks’ red cups and the beginning of Freeform’s 25 Days of Christmas marathon). With Dec. 25 quickly approaching, it seems like it’s the perfect time to not only set up those decorations and put on those ugly sweaters, but also to rewatch iconic holiday classics, such as Frank Capra’s “It’s a Wonderful Life,” Bob Clark’s “A Christmas Story,” Chris Columbus’ “Home Alone” and even … John McTiernan’s “Die Hard”? It’s time to address the elephant in the room: “Die Hard” is a Christmas film. At least, in my opinion.

Sure, the story of an NYPD officer becoming the last hope for a group of hostages (including his wife) of German terrorists inside Los Angeles’ Nakatomi Plaza is much more of a testosterone-filled, action thrill ride rather than a film that celebrates the true meaning of the holiday. But the way I see it, the film itself takes place on Dec. 24, and what’s better than climbing through an air vent on the night before Santa Claus comes to town?

However, others disagree. “‘Die Hard’ is not a Christmas movie,” said Dakota Vooys, Fordham College at Lincoln Center (FCLC) ’22. “There is no snow. It never snows in Los Angeles. So automatically, it is not a Christmas movie. It’s as simple as that.” Vooys said that in a comedic sense, but I still wonder if he’s fond of the film’s iconic gray sweater that reads “I Have A Machine Gun Now Ho-Ho-Ho.”

And frankly, “Die Hard” isn’t the only film to be constantly questioned of its “holiday movie” classification. Joe Dante’s “Gremlins,” despite its theatrical release in the summer of 1984, takes place during the holiday season. There’s undoubtedly an intentional juxtaposition between the opening titles that non-diegetically play Darlene Love’s “Christmas (Baby Please Come Home)” and the scene where a monstrous Gremlin is completely chopped up into green chunks inside a blender.

But needless to say, this story of an adolescent teenager receiving an early Christmas present from his father that just so happens to be an adorable “mogwai” that, when fed after midnight, transforms into a monstrous creature, doesn’t necessarily scream “joy to the world.”

Or does it? “I think that a holiday film is something that’s part of a ritual,” said Lev Yakovlev, FCLC ’23. “In Russia, we have this film called ‘The Irony of Fate,’ which involves the story of a man getting drunk on New Year’s Eve and ends up flying to Leningrad by mistake. I remember that every New Year’s Eve, this film would play on television, so it ultimately became my ritual. So in my opinion, it all comes down to what you’ve grown up with or what you’re used to. Whether or not it would be ‘It’s a Wonderful Life,’ ‘Home Alone’ or even ‘Gremlins,’ is entirely up to them.”

Meanwhile, Tim Burton’s “Edward Scissorhands” mixes Burton’s gothic imagery with an American suburban fantasy. Johnny Depp’s portrayal of the titular “hair cutter” that initially struggles to assimilate within an environment that doesn’t accept him became the first performance in a long line of Depp-Burton collaborations. And almost all of those collaborations place Burton’s cinematic style front and center, though not necessarily “the true meaning of Christmas.”

But nevertheless, the sequence where Winona Ryder’s character, Kim, is completely amazed by Edward’s ability to immediately create a snowfall by cutting up an ice sculpture might bring those feelings of Christmas cheer.

Or maybe not. “I think Christmas movies need to have that Christmas focus. They need to celebrate the meaning of the holiday,” said Michael Steerman, FCLC ’20. “A December setting just isn’t enough.”

At the end of the day, it’s ultimately a question with a subjective answer. Sometimes, the presence of a single Christmas tree is enough to convince the viewer that the film they are watching is, in fact, a Christmas film. Regardless of whether or not a film truly has something to say about the holiday, even when there is the slightest reference to a tree covered with colorful lights and ornaments, children playing in the snow, or even Santa Claus himself, I already believe that it’s a Christmas film (especially if I’ve grown up watching it during the holiday season as well).

But again, that’s just me.