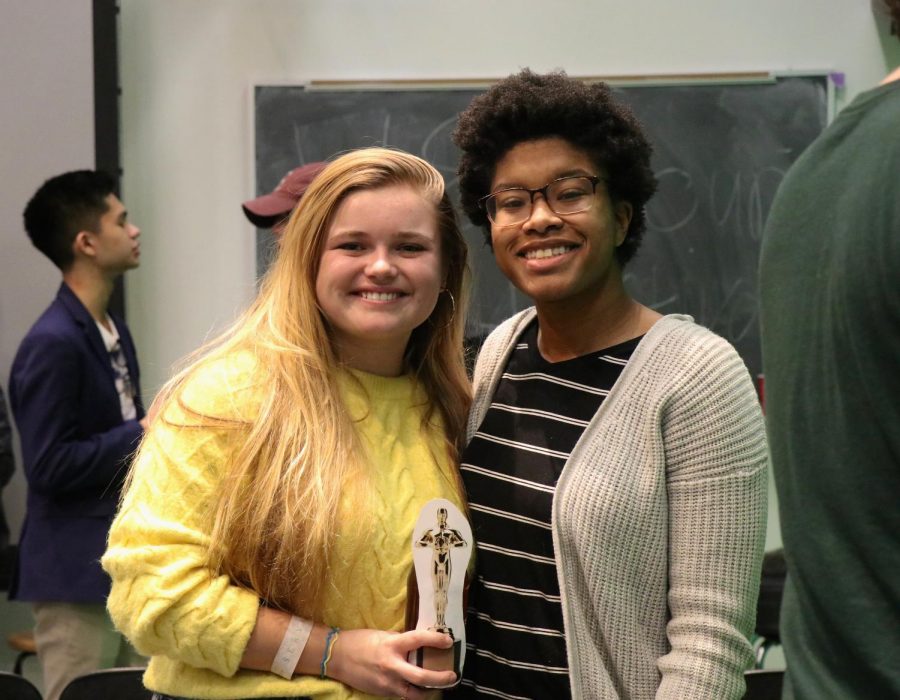 Kayla Champion, FCLC '22, (left) and Daejah Woolery, FCLC '22, are two of the student filmmakers whose movies were screened at the festival this semester.

The 48-Hour Film Festival continues to shatter attendance records, with more than 50 people attending this year. It is likely, though not yet confirmed, that next semester the festival will take place at Film at Lincoln Center.

The movies were shown on Nov. 26 at the Visual Arts Department at Fordham’s Lincoln Center campus. Fifteen films were shown as part of the official selection, an increase from last year’s 12. The festival has rapidly grown in participation each semester, and the SL24-L screening room now feels smaller than ever. But President of the Filmmaking Club Tommy Cunningham, Fordham College at Lincoln Center (FCLC) ’21, plans to go big — he wants to move the event to the Elinor Bunin Munroe Theatre.

“Next semester, I am trying to have it at FilmLinc (Film at Lincoln Center), if the budget gets approved,” Cunningham said. “The dollar amount (of the budget) hasn’t increased; it is just for a different thing.” He believes the location will encourage students at Fordham to shoot their films. “It being at FilmLinc will only increase that incentive,” he stated.

While some of the films were made throughout the fall semester, the ones eligible for awards were shot within the 48 hours preceding the closing ceremony on that Monday. Koty Vooys and Kevin Stoll’s twisted comedy, “Mr. Nobot,” won the most awards of the night, taking home both Best Comedy and the Audience Award. For the first time in the festival’s history, the Best Actress award was shared between Kayla Champion and Daejah Woolery, both FCLC ’22, for their work in the “Get Even” trilogy. A special recognition award was given to “Memories: Economics,” a comedy by Michael Stearman, FCLC ’20. “I am graduating this semester, so this movie is my goodbye to being in New York,” Stearman said. While he screened at the festival for the third time, many other filmmakers were freshmen and sophomores.

The festival was founded in 2016 by the former president of the Filmmaking Club, Luke Momo, FCLC ’19. When Cunningham joined the club in 2017, eight films were screened — only two by freshmen. But since then, the festival has witnessed a whopping 87.5% increase in submissions.

For Cunningham, the biggest takeaway has been “how much … sophomores now (have) improved since last year.” He feels proud because the former freshmen are now “clearly doing what they want to do.”

“My advice for freshmen coming in is to think about the audience going forward. Know that you will eventually make movies for an audience if you want to keep doing this,” Cunningham said. For him, the secret to a great film lies in the balance between knowing the audience and “sticking to your guns.”

Whether you make movies or not, each semester the 48-Hour Film Festival opens its doors to everybody and continues to grow. The organizers plan to keep up with that growth — beginning with its potential move to FilmLinc. Perhaps it will become a city-wide event someday.