Teaching a Robot How to Draw 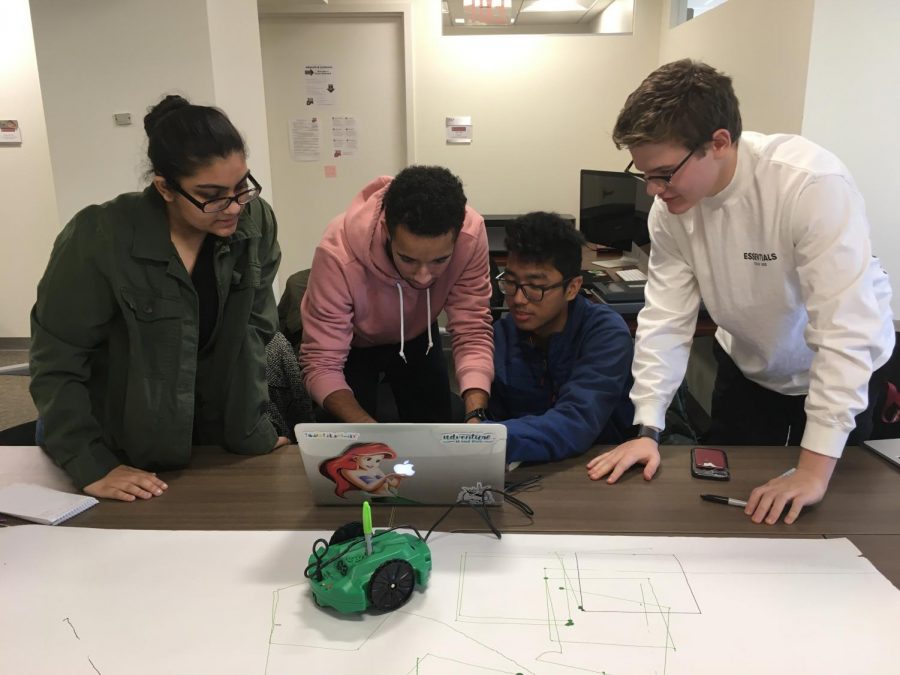 Fordham Lincoln Center students collaborate to code for their robot.

Internet-savvy folks might remember when, earlier in the decade, an online frenzy arose over the NASA employees who programmed a Mars rover to sing. Years later, a group of Fordham students would gather in Martino Hall with a similar aim: to teach its own small fleet of robots to draw.

The robots, called Scribblers, were the stars of “Robotic Art Therapy,” held by the Tech @ LC club on Nov. 21 to bridge coding and art. The Scribbler was described as a “very cool Roomba” by event host and club secretary Isabella Frassetti, Fordham College at Lincoln Center (FCLC) ’20, and each machine immediately captured the hearts of the student programmers. Attendees excitedly outfitted the Scribblers with colorful Sharpies and gave them names. (I dubbed mine Zoom.)

The program was open to students with all levels of coding expertise, including none. After a slow start due to some ironic technical difficulties, Frassetti began by introducing the students to BlocklyProp, Google’s open-source platform for coding and computer programming.

Instead of the embedded coding language Python, BlocklyProp displays commands in plain English. Students strung these together to direct the robots, which were connected to their own laptops. In the case of this event, the commands allowed the robots to navigate a piece of paper on which they drew.

Frassetti was inspired to conduct this workshop at Fordham after participating in an immersion program in 2015 with Girls Who Code (GWC), a nonprofit organization that promotes female involvement in computer science careers. It was there that she discovered the possibilities of combining robotics with the arts.

“We did a Scribbler program, but we did it specifically on teaching robots how to dance,” Frassetti said of the GWC workshop. “I’ve always wanted to do the idea of an art therapy robotic workshop for Fordham because I thought it was so cool.”

Club President Angie Kawanishi, FCLC ’21, was immediately on board. A computer science major and musician herself, she is also interested in the intersection between scientific and artistic disciplines, and how advanced the resulting work can be.

“You can actually use software to make a painting,” Kawanishi explained, “and it would be very surprisingly different from how a person would draw.”

Because “Robotic Art Therapy” was a beginner-level event, Frassetti prepared code for drawing basic shapes — a square, triangle, figure eight and star — which the group copied on their own computers to familiarize themselves with BlocklyProp. Once they got the hang of it, participants began to create their own variations on the code and draw different shapes. A geometric potpourri of hexagons, circles, trapezoids and houses soon filled the paper.

It was the first event of its kind, and both Kawanishi and Frassetti hope it won’t be the last.

“We can also do a dance competition like (Frassetti) did in her event,” Kawanishi said. “If I do this same thing again, I would definitely try to focus the marketing on the art department … Most people who came were computer science people who were interested in the technical aspect. But I do think it’s very interesting for people to have an idea of how the robot can be incorporated into their art.”

Frassetti explained that Scribblers have many artistic functions besides drawing that she wants to share with students.

“They can quote-unquote ‘dance,’” she reiterated. “They can create pitches, so they can sing. They can do a light show. If you draw something, it can trace the line.”

No one expressed anything short of glee when a Scribbler successfully drew a shape they programmed for it. The student/robot art was not intricate, but the simple act of successfully teaching an adorable little machine to draw achieved the event’s therapeutic purpose.

Frassetti noted the pride the attendees got from the task. She hopes it inspires them to learn more about robotics and attend future events.

“You coded a robot, and you taught it how to draw,” said Frassetti in summation. “That’s really impressive … Coding and robots don’t have to be something that’s stressful.”