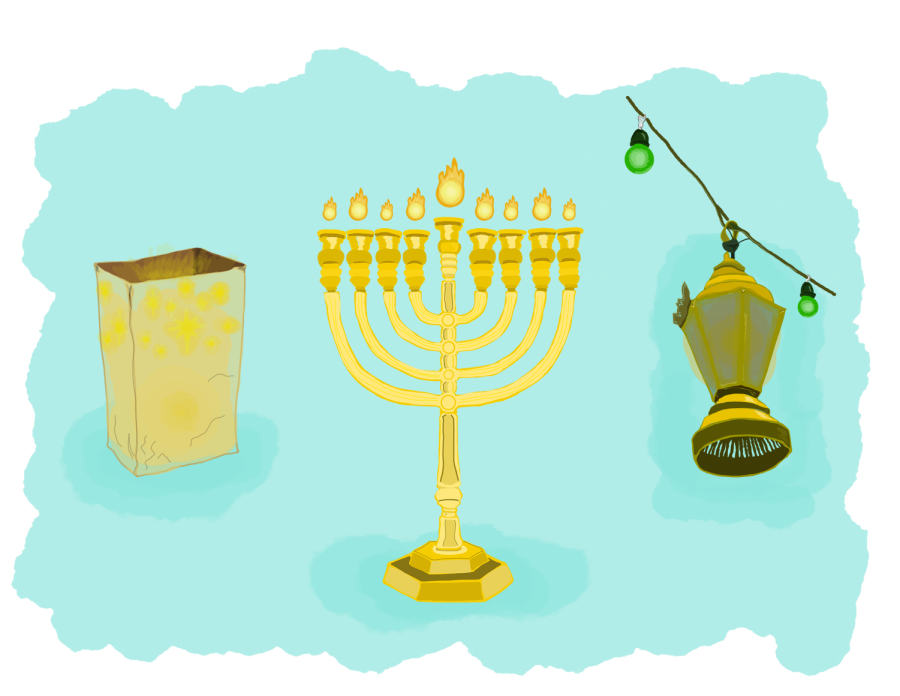 “It’s like the Jewish version of Thanksgiving,” Michael Singer, Fordham College at Lincoln Center (FCLC) ’20, said of the holiday, which will begin on Dec. 22 this year.

“It celebrates a historical event,” he elaborated. “It’s very important in terms of spending time with family. There’s lots of traditions associated with it, but liturgically it doesn’t matter all that much. Most of the holiday’s observed at home, telling stories.”

The tale central to Hanukkah, Singer explained, began with the reconstruction of the Temple in Jerusalem following the devastating Maccabean Revolt. According to historical accounts, there was only enough oil to keep the menorah in the Temple burning for one night. Miraculously, it lasted for eight nights, inspiring the eight-day Hanukkah celebration.

“People were worried Jewish life couldn’t continue, but it was miraculously restored,” Singer said. “Hanukkah kind of celebrates restoration in the darkest time of the year.”

At Fordham, he celebrates at the Jewish Student Organization’s annual Hanukkah party, which has become a tradition for him in its own right.

“There’s old faces and new faces,” Singer said of the community with whom he celebrates at the party. “You play dreidel, sing Hanukkah songs — which are always, always a blast. There’s gelt, which are special chocolate coins that you eat, gamble them in dreidel and win them … and lots of food.”

Last year, he studied abroad in Ireland for a year, where he said the Jewish community is “vanishingly small.” While in Dublin, he had to find a new venue for celebration.

“I went to the Dublin Jewish progressive congregation, which is the one non-orthodox synagogue in the whole of Ireland, and went to their Hanukkah celebration,” Singer said. “We did the whole service and then after, there’s lots of food. Also, there’s the Jewish Students Union at the college I was studying at, so I actually was one of the few people that actually knew the prayers, so they volunteered me to lead it.”

Ultimately, Singer repeatedly mentioned the centrality of family to his observance of Hanukkah. Back home in California, he and his family observe most of the “classic” traditions associated with the holiday: exchanging gifts, eating oily foods and lighting the chanukiah — a fixture often used interchangeably with the menorah, but which has nine candles as opposed to a menorah’s seven.

“It’s just, again, a time to be with family all together, which is always sweet and meaningful,” Singer said.

While Maddie McCoy, FCLC ’22, and her family aren’t religious, they still look forward to celebrating Christmas every year.

Christmas season at the McCoys’ begins right after Thanksgiving, as they always set up and decorate the tree the next day. Next, the McCoys and their neighbors place candles into paper bags to line the streets. “We tell the kids that the lanterns are to light the way for Santa,” McCoy said. Christmas Eve, though, is when the real holiday fun starts.

Every Christmas Eve, McCoy’s aunt comes over and, together with her mother and two sisters, they make dozens of Christmas cookies. “We always make some of the basic Toll House cookies, chocolate chip cookies, peanut butter cookies with Hershey kisses and our famous wreath cookies,” said McCoy. The wreath cookies are made with corn flakes, melted marshmallow and green food dye to make the cookies look like Christmas wreaths.

After all the cookies are made, McCoy and her sisters pick the best two cookies and set them out for Santa with a glass of milk. “My sisters and I are old enough to know that our mom eats the cookies and drinks the milk,” McCoy said, “but we do it every year regardless.”

The next morning, McCoy and her sisters wake up at 5 a.m. to look at the Christmas tree. “We aren’t allowed to open presents yet or even go downstairs,” said McCoy, “so my sisters and I just sit at the top of the stairs in our pajamas, looking at the tree and all the presents.” Once their mom wakes up around 9 a.m., they can finally go downstairs and start opening presents.

Before she opens a single gift, McCoy makes sure to put on a marathon of “A Christmas Story” that’s televised each year. “Everyone quickly gets sick of the movie and turns it off, but I always put it back on,” McCoy said.

Last year, McCoy’s mom got her and her sisters each a T-shirt with a picture of their bulldog Margo’s face on them. Even though the girls wore Margo’s picture, Margo preferred to stick with a Philadelphia Eagle T-shirt.

Later that day around 2 p.m., McCoy’s extended family comes over to her house for a large ham dinner. (McCoy makes sure that “A Christmas Story” is still on the TV.)

While Eid al-Fitr fell on June 3 this year, this Muslim holiday changes dates according to the lunar calendar every year, sometimes falling during the winter holiday season. Nisa Manzar, FCLC ’23, celebrates this holiday after a month of fasting during Ramadan.

In contrast to the calmness of Ramadan, Eid al-Fitr is celebrated with joy and festivity over the forgiveness of their sins. To Manzar, the holiday is important because it is meant to “celebrate sacrifice and emphasize the importance of family.”

Muslims celebrate Eid in many ways: preparing food such as Boeber (a dish made with vermicelli with dates), Maamoul (a shortbread cookie with stuffing) and Cambaabur (a crepe-like dish served with sprinkled sugar and yogurt), along with hanging twinkling lights, lanterns and exchanging gifts. With her family, Manzar usually celebrates by visiting a mosque early in the morning and going to her aunt’s house for brunch. She and her family also wear Shalwar Kameez — traditional Pakistani clothing — to celebrate Eid.

“It’s a very important holiday for me and all Muslims,” Manzar said.

Manzar emphasized how central family is to Eid. She has always spent the holiday visiting as much family as she could, traveling to Connecticut and New Jersey to spend time with them. “Similar to Christmas, kids get money — known as ‘eidi’ — from their elders on Eid,” Manzar said. This gift makes the trip all the more exciting for the children in her family.

Eid al-Fitr has come and gone, but the Muslim Students Association and the Desi C.H.A.I. club celebrate Eid every year.