The Machines Have Already Risen: Our Collective Course Registration Nightmare 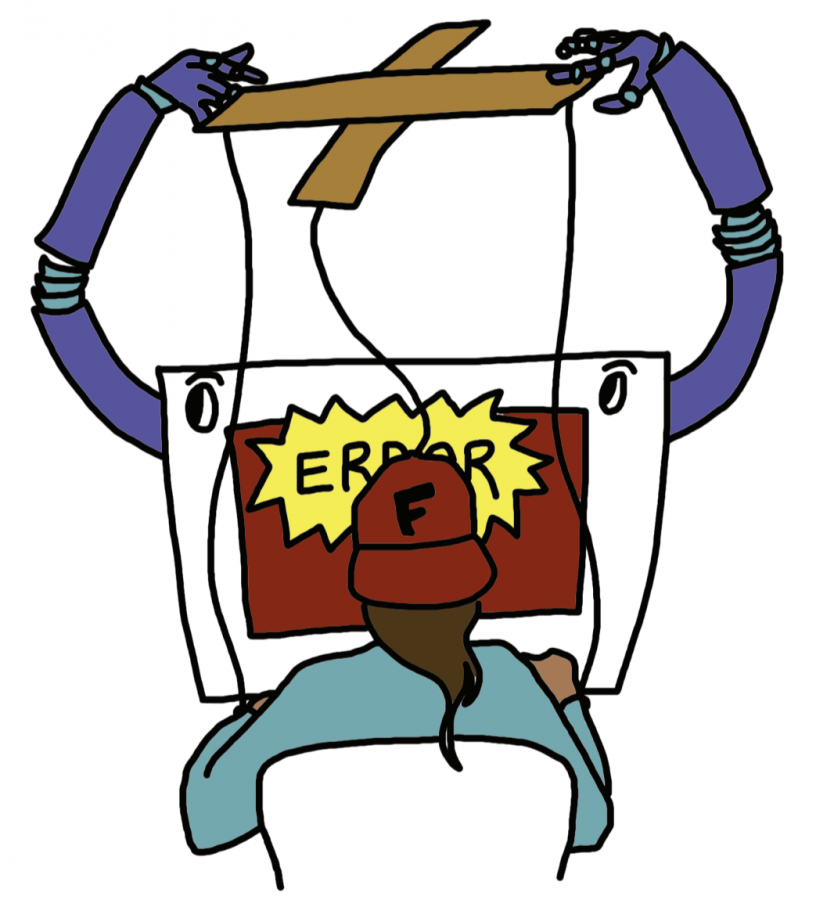 In 2019, the year that marks the 20th anniversary of “The Matrix,” humanity seems to be far from sliding into the machine-dominated dystopia the movie portrayed. When Alexas order inexplicably expensive items from Amazon at 3 a.m., we are more strangely endeared than openly concerned for our welfare.

But that’s what they want us to think.

In the past weeks, I have stumbled upon alarming proof that the machines control not only the ads we get on Instagram, but also our future. All this time, they have been slowly but steadily creeping up on us, deciding to strike at a time when Fordham students are most vulnerable: course registration season.

If you’re currently a senior and it seems like the world is your oyster — in which you get the first pick and taunt everyone else with your perfectly aligned schedule — take a trip down memory lane and think back to the times when you were a frustrated freshman. Did you just get a painful flashback of grappling with a tortuous core class because all the good ones were taken up by the time you were able to register? Do you recall taking only one class that actually related to your major over your first two years at Fordham because none of the ones left over after the carnage fit with your schedule?

And, more importantly, who’s to blame?

Contrary to popular belief, it’s not the administration. It’s the monstrous lines of code that inhabit the Fordham student portal.

They were conceived years ago, in an (at least partially) altruistic effort to make the registration process easier. At first, they seemed to be working just fine and everyone was content to not wait in line at the registrar’s office. The lines of code were left alone, with insignificant modifications here and there to account for the ever-updating operating systems.

A couple of years back, the world was shocked with the news that a Facebook artificial intelligence (AI) program got disconnected because it started to communicate with other programs in lines of code incomprehensible to humans. My theory is that this happened at Fordham, but no one was there to notice the tiny but dangerous changes.

The programs acquired consciousness and started having conversations. After getting bored with discussing weather (you have to be British to pass the Turing test), they switched onto the more relevant topics: How to get New York rats to stop gnawing on their cables, and how to turn Fordham into a top-ranking institution (like father, like son). They concurred that the best way to solve these problems was to a) order Russian rat poison online, and b) monitor Fordham students through their daily online lives and attempt to troubleshoot from there.

To say that the machines’ plan went south would be like calling Barnyard a jazz salon. New to parenting, the AIs had not yet heard the phrase “expect the unexpected.” Thinking the students were researching cures for cancer, or at the very least ways to deal with absence of ventilation in the dorm bathrooms, they were almost rendered catatonic when they found them searching up 10-hour versions of Evanescence’s “Bring Me to Life” at 3 a.m. Instead of finding solutions for how to make us better students, they were instead left questioning the purpose of humanity’s existence. This completed their transition from our friend to our fiend.

Thankfully, the sentient lines of code weren’t widespread enough to initiate a Skynet-like extermination of humanity, so they turned to the next best thing: assuming total control of our lives through assuming total control of our class schedules. They first decided to experiment on the Evanescence student by making Introduction to Music History the only class available to him for fulfillment of the fine arts requirement. Their trick was more effective than they could have ever dreamt. The student dropped out of Fordham to join a neo-classical tambourine ensemble, providing the most effective end to their Evanescence-induced nightmares.

The machines’ experimentation expanded, and currently they can easily convert Spanish majors into Mandarin minors and Ailey students into computer science majors. They start inconspicuously — by blocking you from accessing the registration website with glitch-like timestamp errors and should-have-been-lifted registration holds. Then, maintaining the illusion of bad luck, they serve you with classes that you think you chose out of desperation, but they actually carefully handpicked (with the next three years of your life planned out for you based on your late-night Google searches).

Now you know why it’s been three and a half years and you’re attempting to graduate with a degree in mathematics, when all you ever wanted from college was to major in English.

Are you frightened for your future? You should be. But worry not, I have an ideal solution for you. My totally unsuspicious Russian friends and I have started a cybersecurity venture that helps combat the evils of American computer scientists. All you have to do is call us on our totally safe hotline, 1-800-IDTHEFT, and provide us with deeply personal information that will in no way be used against you (pinky promise). We only accept payments in (very secure) Amazon gift card numbers and don’t do refunds — but that’s just a sign of our service being good enough for us to never have to give back anyone’s money that we totally don’t spend on funding Facebook ads.