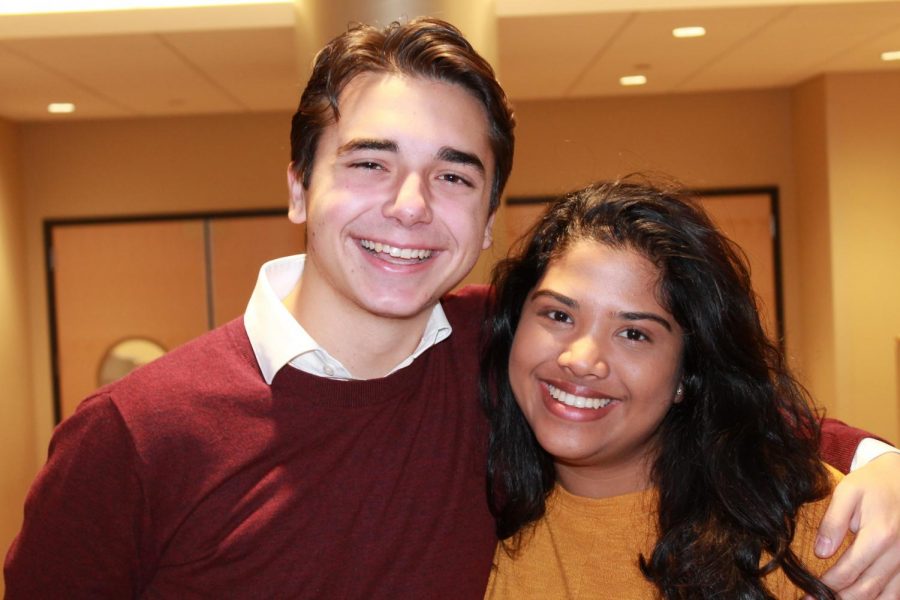 USG President Pro Tempore and sophomore Senator Rachana Komatireddy, Fordham College at Lincoln Center (FCLC) ’22, explained to the students in attendance that Town Hall is a way “for students to have an open forum to be able to discuss their concerns about Fordham with the people who can help push for that sort of change.”

A shared concern at the meeting was Fordham’s mandatory health insurance policy, issued at the end of last semester. Attendants of the meeting expressed that requiring students to purchase healthcare, regardless of the vendor, if they want to stay enrolled makes the cost of education more expensive to students.

Chair of Student Affairs Loreen Ruiz, FCLC ’21, acknowledged that while she understands Fordham’s “concern about the well-being of students, it also feels like a very obvious money grab because it’s thousands of dollars added each semester.”

To resolve this issue, Komatireddy suggested that USG open a dialogue with the Student Health Insurance Compliance Administrator Maritza Rivera-Garcia in order to work toward an agreement in which Fordham health insurance remains available to students, but health insurance is not mandatory.

Another issue addressed was the increase in price for Food Services and Facilities’ waitstaff, which was brought to USG’s attention in early November. This caused trouble for several Fordham clubs including USG, as they will have to re-allocate Student Involvement fee money in order to serve food at their events. This blindsided clubs that have already allocated funds for each event, according to Ruiz.

For the upcoming Tree Lighting on campus that USG hosts every year, Ruiz said she was caught off guard when Food Services alerted her that the event will require a waitstaff this year: “In the past five years, we have never needed waitstaff for this event.”

Sophomore Senator Joseph VanGostein, Gabelli School of Business at Lincoln Center (GSBLC) ’22, said that it is unclear whether Food Services will honor their prices from last semester for student clubs, an issue which has been a recurring issue for clubs this year.

Tina Thermadam, president of USG and FCLC ’20, said that USG is responding to this change by arranging regular meetings with Food Services to address students’ concerns. USG’s initiatives for fixing this grievance is to arrange a student discount on waitstaff prices for student-organized events or working with student involvement to avoid needing a waitstaff for evening events, according to Thermadam.

Later in the Town Hall, Ruiz raised concerns that CPS provides students with 10 free sessions per semester, but after those 10 sessions, students are not able to continue with their services, and CPS must refer the student to a professional outside of the University.

One student, who chose to remain anonymous, said that the protocol is “hard, because I am not from New York, so my insurance doesn’t really cover me outside of my regional area.” According to the student, part of the issue was that CPS did not explain that the sessions would have to end after the 10 provided sessions.

USG Chair of Facilities Yunuen Cho, FCLC ’21, said that while the 10 sessions reset every semester, “that doesn’t mean you get the same person, which is an issue.” Once a student builds trust with their designated counselor, they may feel as though they are starting all over again beginning at the next semester, Cho explained.

As a result of this discussion, Thermadam addressed these issues about CPS at the USG E-Board meeting last week. USG has reached out to CPS to set up a meeting in the upcoming weeks.

“I definitely think there is sometimes not enough communication between students and CPS, even though it is a very useful resource for students,” Komatireddy said.

Aside from the students’ concerns addressed at the meeting, USG also took a moment to acknowledge that student involvement this year has been greater than in previous years, particularly with the new freshman class.

Thermadam attributes the success of USG’s Fordham Fridays — every Friday, students wearing maroon get free pizza — to the engaged freshman class, as well as to the foundation that USG set for Fordham Fridays last year which continued through this semester. “I think that awareness is what caused our pizza to disappear in record time,” Thermadam said.

Even after seeing increased participation at their events, Thermadam is heading into the next semester hoping for a larger turnout at USG Town Halls, which happens once each semester. “I want students to see it and feel like they can share something that they’ve been experiencing positively or negatively as a student,” she said.