Bishop With Ties to Fordham Accused of Sexual Assault 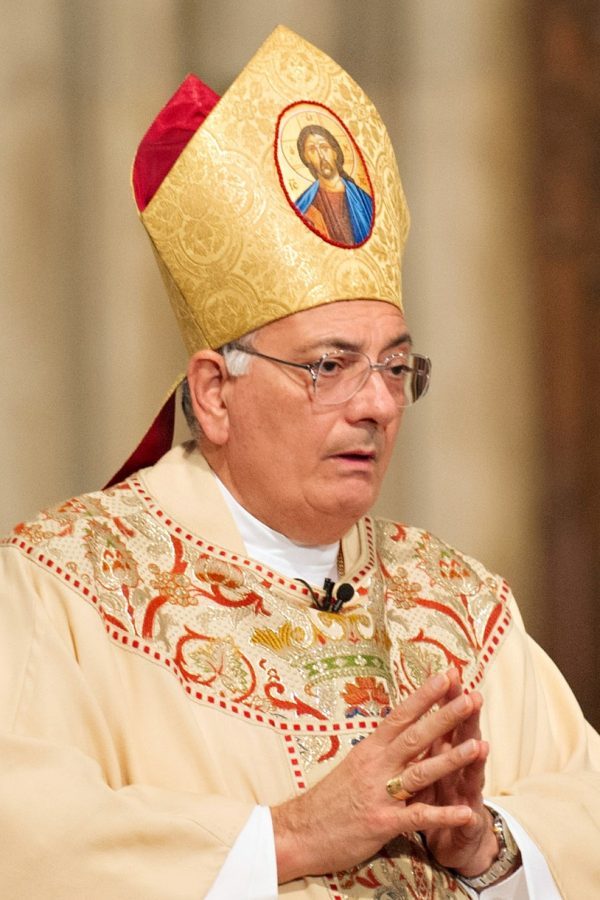 Bishop DiMarzio, who collaborated with Fordham to create the CSAA in 2012. has been accused of sexually assaulting a student in 1975.

Nicholas DiMarzio, a bishop with ties to the local Catholic community, including Fordham, has been accused of sexual assault. The allegations came to light on Nov. 11, when attorney Mitchell Garabedian sent a letter to the Newark archdiocese accusing DiMarzio of abusing a student at a middle school in Jersey City.

Garabedian is representing 56-year-old Mark Matzek who claims that Bishop DiMarzio and the late Rev. Albert Mark sexually abused him multiple times between 1974 and 1975. Matzeck was a student at St. Nicholas School where DiMarzio served as the parish priest.

In the letter, Garabedian also demanded $20 million from the archdiocese in damages for Matzek as compensation for the trauma he has endured. Matzek had been unable to bring the case to court until last May when New Jersey extended it’s statute of limitations for child sexual abuse from an age 20 to 55.

In May 2012, DeMarzio worked with Fordham University’s Graduate School of Education (GSE) to form the Catholic School Accreditation Association (CSAA). According to Fordham News, the CSAA is a partnership between GSE and the Diocese of Brooklyn which provides regional Catholic schools an alternative accreditation method as opposed to the Middle States Accreditation Process.

At the time, The Rev. Joseph McShane, S.J., expressed his pleasure with the partnership. “This partnership will enable us to help one another in very significant ways,” McShane said in 2012. “Fordham is delighted to do it, honored to do it and committed to the work.”

In response to the allegations, Assistant Vice President for Communications Bob Howe said on behalf of the university, “Our hearts go out to the victim: such abuse is hard to countenance or forgive, and is a terrible violation of the human spirit. We pray for the healing of this victim, and all the victims of sexual abuse.”

The allegations against DeMarzio came just days after he completed an investigation of sexual abuse within the Diocese of Buffalo.

DiMarzio currently serves as the Bishop of the Roman Catholic Diocese of Brooklyn. In Oct. 2019, he was appointed by Pope Francis to investigate sexual abuse allegations and alleged cover-ups by Bishop Joseph Malone in the Diocese of Buffalo.

During DiMarzio’s apostolic visitation — an official investigation authorized by the Holy See — to the Diocese, he interviewed over 80 clergy and parishioners over the course of a week. The Diocese of Brooklyn stated on Oct. 31 that DiMarzio will report his findings to the Holy See at a later date, noting that “no additional information will be shared beyond this statement at this time.”

It is unknown how the surfaced allegations against DiMarzio will affect the publication and release of his report.

Garabidian claimed that DiMarzio’s visitation was “tainted” as a result of the allegations in an interview with the Associated Press. “There needs to be a truly neutral investigator to determine whether Bishop Malone should resign,” Garabidian said.

DiMarzio, who was meeting Church officials in Rome when the accusations were made public, has denied the allegations. “In my nearly 50-year ministry as a priest, I have never engaged in unlawful or inappropriate behavior and I emphatically deny this allegation,” he stated to the Diocese of Brooklyn.

DiMarzio told the Tablet that Pope Francis inquired about the accusation during his visit. “I was amazed that the false accusation made against me was already known to him,” DiMarzio said.

DiMarzio claimed that Pope Francis “expressed his hope that the matter presented against me would be cleared up quickly for the good of the Diocese of Brooklyn.” DiMarzio thanked those within the Diocese of Brooklyn who have defended him. “You have a right to more information on this matter, and I pledge to you continued transparency in a future column.”