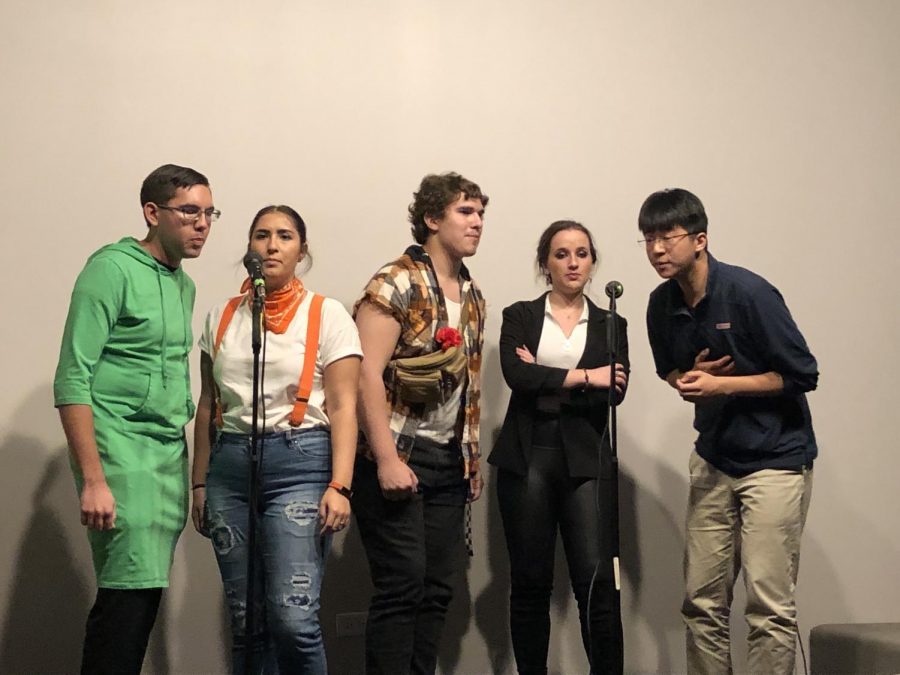 "Hadestown" numbers dominated the night, beginning with a group rendition of "Chant."

On Nov. 7, the Student Lounge was transformed into a cozy concert venue as Fordham’s Chamber Singers took on an assortment of modern show tunes in “Fordham Backwards.” A setlist of entertaining, gender-bent musical numbers paired with a small audience of friends made for an intimate, supportive and fun environment.

To kick off the evening, the Chamber Singers presented their version of “Chant” from the Broadway blockbuster “Hadestown.” President Leah Garza, Fordham College at Lincoln Center (FCLC) ’20; Vice President Ethan Shamim, Gabelli School of Business at Lincoln Center (GSBLC) ’21; Treasurer Tony Li, GSBLC ’20; Secretary Jack Dwyer, FCLC ’20; and Elizabeth Cini, FCLC ’21 captivated the audience through lyrics that chronicle the frustration of different characters in the underworld. Their mix of haunting harmonies and stomping melodies filled the room with a passionate energy that continued throughout the performance.

Following the opening song, Cam Dasher, FCLC ’22, covered “Pierre,” a soaring number originally sung by Josh Groban in the Tony Award-winning musical “Natasha, Pierre & the Great Comet of 1812.” The show is an adaptation of a 70-page segment from Leo Tolstoy’s “War and Peace,” delivering a story of love, scandal and rebellion. In his self-titled anthem, Pierre asserts his discontentment with the compliance and mundanity present in his own life and surroundings. Dasher masterfully delivered the demanding piece which combines a fast-paced rhythm with bold arguments and belted high notes.

Next, real-life couple Garza and Dwyer charmed listeners as the star-crossed lovers Orpheus and Eurydice in “Promises” from “Hadestown” in which the engaged characters promise their love for one another. Garza and Dwyer navigated the emotional lyrics and dialogue seamlessly, as Dwyer simultaneously played the backup piano instrumental.

Continuing the “Hadestown” theme, Shamim and Cini also inhabited Orpheus and Eurydice — this time, as they first meet in “Wedding Song.” Both singers exhibited commitment to the number, incorporating subtle costumes and the trademark red carnation seen on the show’s poster; these extra elements led to supportive laughter and cheers from the audience. Vocally, each paid tribute to the original Broadway performers — Amber Gray and Patrick Page, respectively — by incorporating Gray’s memorable growls and Page’s signature deep vocals.

Chloe Siakam, FCLC ’21, and Garza closed the performance with a stripped-down cover of the popular “Aladdin” ballad “A Whole New World.” The love song served as a perfect ending moment, leaving the two singers giddy as they expressed their gratitude for their close friendship.