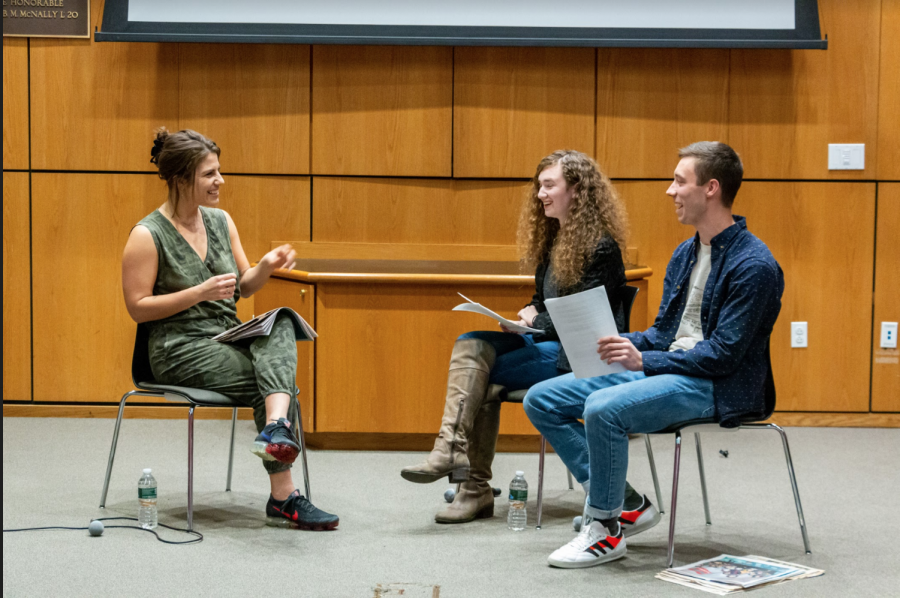 Lauren Duca, left, sits with the current Editors-in-Chief of the paper

By BENNETT REINHARDT and ETHAN COUGHLIN

On Friday, Nov. 8, Lauren Duca, Fordham College at Rose Hill (FCRH) ’13, journalist and media personality, appeared at the McNally Amphitheatre in a candid and wide-ranging interview. The event was hosted by the paper, an alternative student-run newspaper published at the Rose Hill campus, and sponsored by the Fordham Department of English.

Duca was Editor-in-Chief of the paper while she was a Fordham student and discussed how she became interested in the organization during Fordham’s club fair and was initially drawn to the organization as both a writer and someone not afraid to upset the status quo. “We were seen as troublemakers and sh-tmakers by the administration,” said Duca.

Some of her work at the paper included a piece on the annoying guy in your philosophy class that talks too much, how she was looked at based on her breast size, and the sexual harassment she and other female students had to endure on Fordham Road.

In a written question-and-answer session published in the paper ahead of the event, Duca stated that “[w]riting for the paper is the thing that made me decide to be a journalist.” After Fordham, she was an entertainment reporter at “The Huffington Post” and since 2015 has been a freelance journalist.

John Bugg, Professor of English and Director of Graduate Studies, introduced Duca as a Fordham alumnus and one of his former students. “We’ve been working to reach out to our English alums to bring them to campus for events like this. They are out there in the world doing a lot of fascinating things, and I think it’s important for current English majors to see the different kinds of career paths they might follow,” Bugg wrote in an email.

Duca commented on how technology is becoming extremely important in journalism and society. “[E]verybody communicating online ought to hold themselves to the standard of journalism, and a feminist journalism, in the sense that we should all be trying to give each other information to have more collective power,” Duca said in the interview. “[T]here really is a democratizing force available in these, the new spaces that have been offered up by the internet,” she added.

Duca also spent significant time discussing negative comments she has received throughout her career: “[T]his angry force that from all different angles is basically just saying, ‘Shut up,’ you know? ‘Don’t express. Don’t create. We don’t want to hear you. Your voice is not good enough.’”

But she encouraged young people not to allow others’ criticism to limit their potential. She added that “actually receiving it and continuing to create anyway has been the greatest gift that I could have ever hoped to evolve from.”

Duca quickly rose to fame at the end of 2016 with the publication of her popular Teen Vogue article, “Donald Trump is Gaslighting America,” and subsequent Fox News interview with Tucker Carlson in which she called him a “sexist pig.”

“It very much felt like a game show,” said Duca, referring to the Fox interview, “where it was like, ‘Come and defend your humanity, and we’ll see if we can mess you up.’”

Since then, Duca has amassed more than 400,000 followers on Twitter and has become a left-wing icon for many.

Duca did not shy away from discussing mental health issues she faced from the quick rise to fame and the hate that she received, and still receives, on Twitter. “I always knew I was smart, knew I was a good writer, but I think I felt like if you took my intelligence and my ability to write away, there wouldn’t actually be much left.” While she said that she was in a dark place then, she felt like she learned from it and came out a better journalist and person in general.

Jack Archambault and Meredith McLaughlin, both FCRH ’20, both Editors-in-Chief at the paper, interviewed Duca on-stage during the event. “I thought one of the most interesting ideas brought out was the idea of gatekeepers in politics and journalism — people who ‘make the rules’ and decide who can and can’t participate in conversations and have a voice,” Archambault wrote in an email.

After answering audience questions, Duca signed copies of her book, which were given free to the intimate crowd, and chatted with those in the audience. The event was part of a larger series of appearances that Duca is making after “How to Start a Revolution” was published.

This event was not the first time that Duca has spoken at Fordham since her graduation. She spoke at an event hosted by the Lambda Pi Eta communications honor society in March 2017, where she also discussed online journalism and young people in politics.

You can read the paper’s Q&A with Duca on the paper’s website and pick up her new book, “How to Start a Revolution: Young People and The Future of American Politics,” in stores and at Barnes and Noble’s website.