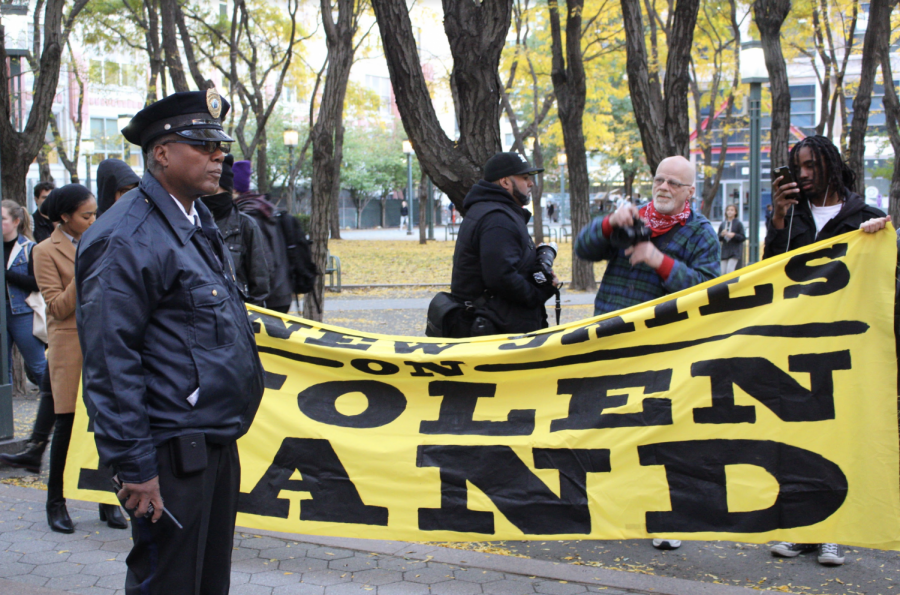 An emergency action protest against the New York Police Department (NYPD) and Metropolitan Transportation Authority (MTA) was held in downtown Brooklyn on Nov. 1, 2019. The march of more than 1,000 people formed in response to incidents of officers punching a teenager and holding another at gunpoint for evasion of the $2.75 fare.

During the demonstration, protestors partook in mass fare evasion at the Hoyt-Schermerhorn Street Station, hopping turnstiles in front of on-duty officers.

The unsanctioned protest was focused on highlighting the difference in enforcement of fare evasion penalties towards low-income and minority commuters. “I was impressed by how intentional the organizers were in giving voice to certain people,” said Amelia Antzoulatos, another protest attendee and Fordham College at Rose Hill (FCRH) ’21. In her opinion, the protest allowed “black faces and voices to rise to the forefront” of the conversation around fare evasion enforcement.

Woody Wisz, protest attendee and Fordham College at Lincoln Center (FCLC) ’23, said, “The city has reached a point where people aren’t comfortable standing on the side anymore.”

“It was a very militant demonstration, and I think it’s only the beginning. There is no sign that it is going to stop,” said Travis Knoppert, FCLC ’21 and Socialist Students Coalition (SSC) organizer.

“We hopped the turnstiles to protest the NYPD’s broken-windows policing,” Wisz said. Broken-windows policing is the practice of enforcing visual signs of civil disorder ⁠— such as graffiti, loitering and fare evasion ⁠— which in theory dissuades more serious crimes. The practice saw widespread implementation in New York City throughout the 1980s and was largely discontinued in favor of surveillance in the early 2000s.

According to the New York Times, Gov. Andrew M. Cuomo has advocated for hiring 500 additional officers to patrol subway stations, which would cost the MTA more than $50 million a year.

However, many students at the protest disapproved of Cuomo’s proposition. “Spending millions of dollars on hiring more officers is hypocritical when the problem is supposedly needing money from the fares,” protest attendee Olive Zoda, FCLC ’23, said.

The protest’s final gathering was outside the Barclays Center. “Seeing the massive crowd in one area surrounded by police solidified how much power there is in community political efforts,” Zoda said. “As a white student, I have to weaponize my privilege to fight oppression.”

According to the New York City government, about 19% of New Yorkers live below the city’s poverty line. In 2019, Mayor Bill de Blasio and City Council Speaker Corey Johnson introduced the half-priced metro plan, but so far only 13,000 New Yorkers have been eligible.

Across the City University of New York (CUNY), a coalition of students and faculty have formed the organization “Free CUNY” to fight for an anti-racist, tuition-free instiution.

Students for Justice in Palestine (SJP) and the SSC — as well as student groups from Brooklyn College, New York University and Columbia University — have expressed solidarity for the Free CUNY movement.

“It is in the interest of every Fordham student to pay attention to the repression happening at CUNY ⁠— where the majority of students are working class and people of color,” said SJP President Batool Abdelhafez, FCLC ’21. “We need to protect access to higher education at all levels.”

In a statement Free CUNY issued on policing in NYC, they called for the removal of police officers on campus, expressing disapproval for tuition increases funding student surveillance.

“I think those in positions of power absolutely must recognize that they cannot remain complacent or silent,” Abdelhafez said. “All struggles for liberation are interconnected, so we are showing solidarity for Free CUNY. We have unified interests.”

“Violence towards fare evaders isn’t going to stop,” Knoppert said. “The addition of 500 police officers in the MTA is only going to spark outrage and lead to more organized resistance; we intend on playing a role in that.”

Free CUNY’s statement was posted in the wake of the New York City Council approving an $8 billion plan to close Rikers Island and build four new jails in the Bronx, Brooklyn, Manhattan and Queens by 2026. The plan is supported by Mayor Bill de Blasio.

“The military-industrial complex enacts direct violence on poor people of color, while also withholding education and healthcare,” Abdelhafez said. “The money to fund CUNY education is within the $9.5 billion budgeted for new jails and more policing.”

Knoppert labeled the city’s fixation on policing as “an act of class warfare on behalf of the city’s administration.”

Abdelhafez said an easy way to help is to “swipe it forward” if you have an unlimited MetroCard and see someone waiting outside the turnstiles: “It’s legal, simple and a small way we can help protect fellow New Yorkers.”

After attending the protest, Antzoulatos recommended that students should not only speak on their own behalf through publications, clubs and student governments, but pressure institutions to address police brutality. “Many students are dismayed when the university releases condolence statements for our fallen rankings rather than for a teenaged community member murdered a few blocks from the school,” Antzoulatos said.

“A proper response from the university would entail fundamental changes that student organizers have been demanding for years,” Abdelhafez said. “It’s one thing to discuss these issues. It’s another to challenge the system and demand change.”