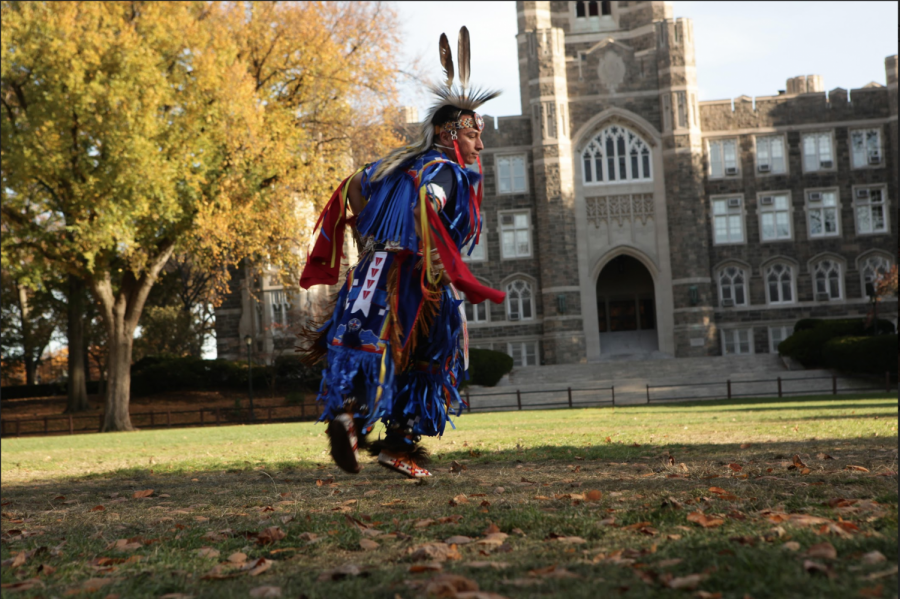 Sheldon Raymore, above, performing on Edwards Parade in 2017.

On Monday, Oct. 14, Fordham University was closed in honor of Columbus Day — a culturally fraught holiday which has, by many individuals, communities, institutions and local governments, been abandoned in recent years. Instead, many now advocate for and celebrate Indigenous Peoples’ Day, which memorializes the Native American communities that were displaced and killed during European colonization of the Americas.

A petition was distributed via social media throughout October by the Diversity Action Coalition (DAC), a committee of the United Student Government at Fordham Rose Hill. The petition called on Fordham University to officially recognize Indigenous Peoples’ Day.

Those who celebrate Indigenous Peoples’ Day have expressed that Christopher Columbus’ legacy is one of damage and destruction and that changing the name of the holiday will help to reframe contemporary understandings of this part of history.

“The people and parts of history we choose to celebrate reveal our values and the narratives that we believe deserve to be recognized,” the petition reads. The group cites Fordham’s Jesuit identity among its primary motivations for championing this cause.

They wrote, “If we are to act with bothered excellence, and be men and women for others, we must come to terms with history, take action to educate our community, and work to create a more inclusive and just future.”

Carsyn Fisher, Fordham College at Rose Hill (FCRH) ’21 and co-chair of the DAC, reported that more than 400 Fordham community members have signed the petition. “If this initiative passes, we could be the first Jesuit university in the country to formally recognize Indigenous Peoples Day, which would be an important step forward,” Fisher wrote in an email.

According to the authors of the petition, “Fordham University is one of only two Jesuit universities in the United States (out of 27) to continue recognizing Columbus Day on our academic calendar.” Likewise, the authors stated how only 6 of the 73 universities ranked above Fordham on the U.S. News & World Report officially recognize Columbus Day.

While many colleges have stopped recognizing Columbus Day as an official calendar holiday, only a few have renamed the break as Indigenous Peoples’ Day. Many schools simply don’t recognize the holiday at all. Usage of the two names vary among the 27 Jesuit universities in the U.S.

Among the student groups supporting the change is Lincoln Center’s Humanitarian Student Union (HSULC), which encouraged students to sign the petition in one of its weekly club announcement emails.

Aidan Donaghy, Fordham College at Lincoln Center (FCLC) ’21 and president of HSULC, expressed his personal solidarity, and that of the club, with the goals of the petition. “We support any effort to uplift and validate Indigenous voices and experiences,” he wrote via email.

“Indigenous peoples in the United States face a long history of systematic oppression, and while University recognition of Indigenous Peoples’ Day is only a small part of reversing these racist systems, it’s an important and necessary one,” Donaghy stated.

The petition was introduced just before the start of Native American and Indigenous Peoples’ Month. During November, the Office of Multicultural Affairs (OMA) hosts a series of programs at both undergraduate campuses. Flyers about the events have been posted throughout the Lincoln Center campus, and OMA has promoted the month on its social media pages. “We are grateful to be pushing for these initiatives at a time of the year when there is increased visibility of Native American culture on campus,” Fisher added.

The programming will include an online “Digital Dialogue,” where participants can log in using an online interface and contribute to a discussion about the roles of indigenous peoples in contemporary American society, on Nov. 18. The online discussion will be facilitated by members of the first-ever Native American and Indigenous Peoples’ Heritage Month Committee, which has collaborated with OMA to plan such events throughout the month of November.

On Friday, Nov. 22, the LC After Dark programming will be a “Two Spirit Celebration,” which will explore Native American conceptions of gender and identity. “We’d love to see LC student support specifically for the closing event since it’s the first time we have been able to do a larger program at LC in celebration of Native and Indigenous Peoples,” Juan Carlos Matos, Assistant Vice President for Student Affairs for Diversity and Inclusion, wrote in an email.

OMA partnered with the Campus Activities Board (CAB) and the Chief Diversity Officer at Fordham’s Native American Festival. On Saturday, Nov. 9, Fordham hosted its third annual event in the McGinley Ballroom on the Rose Hill campus.

The event has sought, in the past, to unite the Fordham student body and Native American communities in the Bronx, New York City and throughout the country. (According to data from spring 2019 from Fordham’s Office of Institutional Research, less than 1% of the university’s total student body is listed as American Indian/Alaska Native.)

“We had even more members from the Bronx community attend the event, which was very exciting for us,” Matos added.

The Thunderbird American Indian Dancers, a traditional dance group, performed at the event. “We have always felt you can learn a great deal about a people through their music and dance. We strive to help broaden peoples understanding by fully explaining the dances we do, there tribal origins, purpose and importance,” Louis Mofsie, the group’s founding director, wrote in an email.