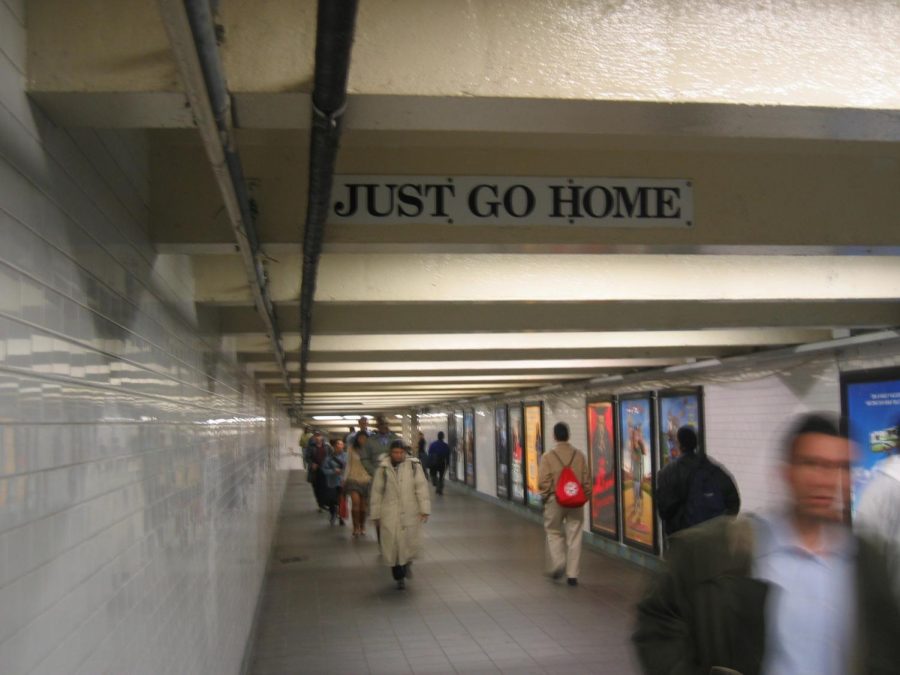 For many New Yorkers, seeing their predicament stated in such stark terms can be more exhausting than subversive.

I’ve walked (or more often, ran) through the 42nd Street subway underpass between Port Authority and Times Square more times than I can count. And every single time, I’ve had my day made infinitely worse by some completely mysterious, contextless words drilled into the ceiling:

I’m really just trying to take the subway, dude. That underpass is crowded and smells like gym socks. Every time I’ve wondered what the hell that was there for and whether New York City was having a sick laugh at my expense. Which, as it turns out, is basically what’s happening.

The literal sign that your dreams are truly dead, better known as “A Commuters’ Lament” is a poem by Norman Colp installed in that cursed underpass in the 1980s, intended as a tongue-in-cheek nod to life as a New York City commuter and worker.

“Life sucks!” the poem reminds us, but here we are, living it anyway. Isn’t that funny?

I already know the world sucks and working life is futile, thank you very much. I don’t need anyone or any subway station to remind me.

I’m far from the only person who feels this way about the poem. In 2011, a college student from the Bronx taped over some of the signs to create a happier version of the poem, in a self-described attempt to make New York a little bit of a happier place.

Well guess what, millennial? The world SUCKS! The late artist’s wife responded to the “happy vandals” with this defeatist quote: “Why be optimistic in these times? Be realistic — life sucks. You get through it the best you can.”

Positivity is lame, kids. Wake up and smell the overpriced coffee.

What exactly are we laughing at here, though? Being a corporate slave? The degradation of the American Dream, or the fact that we’re all sitting by and letting it happen?

Maybe I’m just not a “real New Yorker,” but I don’t find that funny. Sure, the joke about New York commuters’ tiring collective experience at the office once might have been amusing, and even subversive, but now, on a whole, we’re painfully aware of the systems we’re trapped in and how they systematically suck out our souls. So excuse me for being insulted by a city-sanctioned art exhibition that basically laughs in my face and tells me there’s nothing I can do about it, backed by an endless list of people who tell me optimism makes me a hapless and idealistic child.

Now, there’s nothing inherently bad about cynical art. Art is an expression of feeling, and cynicism, darkness and a critical eye on society are completely valid and arguably necessary things to express. The problem is forcing everyone to accept bitterness against their will and dismissing any criticism from people who are understandably depressed by it — or even worse, who dare to think differently.

So the real question is this: Where is the line between your right as an artist to express yourself, and the right of your art to disrupt people’s lives? And where is the line between preventing such disruption and outright censorship? After all, the purpose of art is to make you think. It can’t exactly do that if it’s all rainbows and sunshine blending into the background.

But my problem is that rainbows and sunshine don’t blend into the background, at least not anymore. Yes, life sucks — but outright cynicism about it has become the status quo, not a joke we all quietly share as we go about our disappointing days. We’re not laughing at our condition. We’re being laughed at for not being able to do anything about it. We’re being dismissed for even daring to try.

I absolutely think “The Commuter’s Lament” is a menace to New Yorkers en masse, but I’m not saying that it needs to be taken down. That infernal thing has every right to make my day a little bit worse. I’m just asking artists and those who give their art a platform to consider that in a world where cynicism reigns supreme, they should think twice about where they want to draw it.