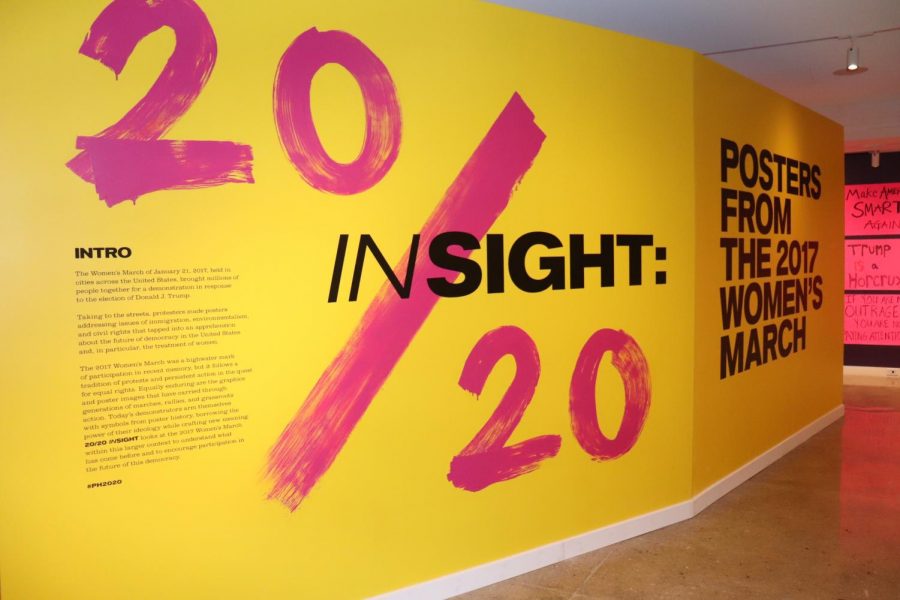 Each poster on display was created for the 2017 Women's March, recalling America's response to the 2016 election as the 2020 election approaches.

If a combination of posters, feminism and art quenches your thirst for culture, Poster House delivers. Located on 23rd Street between Sixth and Seventh Avenues, this museum is the first in America that is completely devoted to displaying posters. Poster House examines signs from as early as the 1800s to present day in an effort to study how large-scale graphic design can impact the perspective of the public.

The museum is currently showcasing an exhibit titled “20/20 Insight: Posters from the 2017 Women’s March” through Jan. 5, 2020. The exhibit displays different posters created by the participants of the Women’s March in Boston two years ago. Each poster in the exhibition underscores the impact of the American public’s response to Donald Trump being elected as president of the United States in 2016.

A look around the exhibition room indicates that the creators of these posters were filled with varying degrees of disgust, pride and indignation. Poster House curated the exhibit strategically, carefully grouping posters on the walls in an effort to inspire viewers. Each poster delivers a powerful message. For instance, there is a poster with the words “This Land was Made for You and Me” in red, white and blue next to a poster that says “Women are People” in the famous font of “We the People” as seen on the U.S. Constitution.

The exhibit is separated into the different themes expressed during the 2017 Women’s Marches, including “Trump Opposition,” “Reproductive Freedom” and “Internet Influence.” By using posters crafted by actual participants of these marches, the exhibit poignantly demonstrates the growing feeling of dissatisfaction of large groups of Americans since President Trump’s inauguration. The statements on the posters vary, including phrases like “Girls Just Wanna Have Funding for Planned Parenthood,” “Trump is a Horcrux” and “Our Arms Are Tired From Holding These Signs Since the 1920’s.” Such posters bridge generations’ worth of political activism, making “20/20 Insight” a unique experience for all.

Art exhibits like “20/20 Insight” can change or influence our perspective of the world — even art as simple as posters. This exhibit at Poster House is a great place to start; getting there only requires 20 minutes on the 1 train to 23rd Street. In exchange, you may open your mind to new thoughts or controversial issues, and perhaps lend an ear to a cause that needs to be heard.