To Print or Not to Print 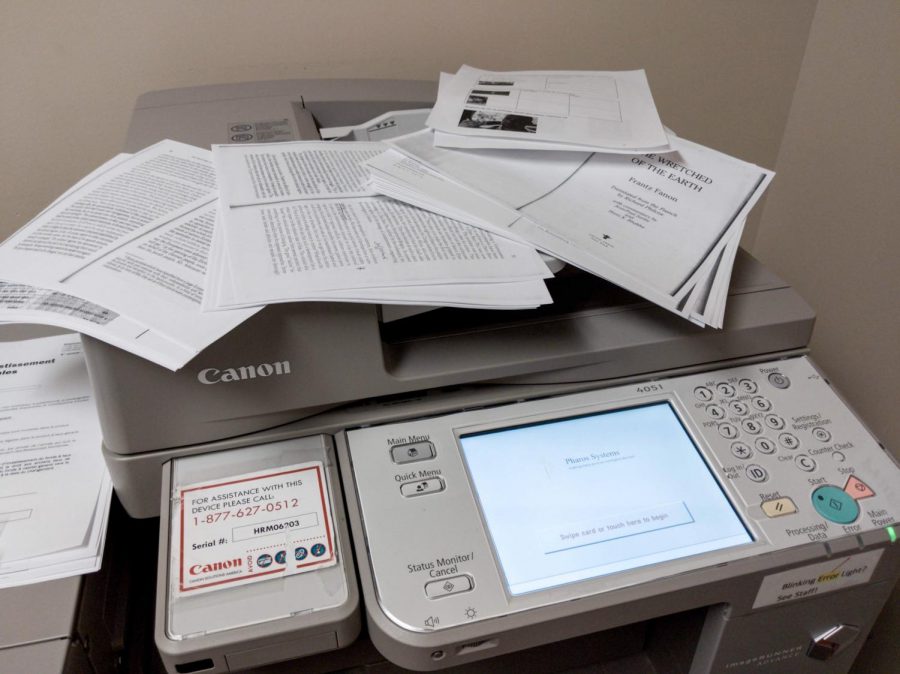 The most ideal printer locations in Lowenstein are only open to faculty.

One might assume that, after a 30-year presence of printers in the Quinn Library, according to Linda LoSchiavo, director of Fordham University Libraries, the printing system at Fordham Lincoln Center would run smoothly. Unfortunately, with each year comes new printing problems, and students and faculty alike are consistently frustrated with the situation, especially during critical periods like midterms.

Student frustrations are sometimes heightened by the fact that they have to pay for it.

“It’s a good resource,” Maia Nunez, Fordham College at Lincoln Center (FCLC) ’22, said. “I can’t say anything too bad about it, other than the fact that we have to pay.”

It costs five cents per page to print in black and white at Fordham and 25 cents to print a page in color. While this may not seem like a lot, it certainly adds up, especially when printing readings for class, as is common with many professors.

According to LoSchiavo, workers at the libraries have run into print problems ever since they have been here, whether the problems have had to do with changes in the system like going cash-free or changing to the remote print system, Pharos.

Pharos is the newest printing system used at Fordham. Though it is a more convenient service for students and staff members, as now they can add money for printing through their phones and personal computers, printing problems still arise from time to time.

LoSchiavo explained as much as library staff members try to help, they have little control over the Pharos system, and it is up to Fordham IT to solve the problem in most cases.

Just a few weeks ago, during midterms, there was a problem with mobile printing, which affects the entire printing system on campus. This problem was more apparent in Quinn Library because so many people come to Quinn for printing purposes. As a result, the issue had a snowball effect on the Quinn printers and anything that was printed properly came out at an unusually slow speed.

Staff members of Quinn Library were on the phone and emailing the IT department, trying to figure out the root of the problem. Robert Allen, assistant director of Fordham University Libraries, and Nick Alongi, head of Library Operations at Quinn Library, described spending four hours at work communicating with the IT Department in addition to bringing students to their offices and the main desk to try printing from their library computers.

Both Allen and Alongi added that while it takes up a significant amount of their time, staff members at Quinn Library do not mind trying to fix printer problems because their ultimate job is to help students.

“The only people who feel worse than the person who’s standing at the printer waiting for a print job is all of us,” LoSchiavo said.

She explained that what is most frustrating is what goes on behind the scenes when the printers are down. She added that students should come to a library staff member right away if a printer is not working properly.

“You’re not going to hurt our feelings,” she said. “That’s the only way we can make things better.”

“I’d love to be devoting that 30% to real research needs,” Allen said.

Many individuals believe adding more printers around campus could help alleviate some of the printing problems at Quinn Library. There has been talk in the past about adding printers to the residence halls, though according to Michael Shanburg, who works in the Department of Special Products for IT, there are no current plans to do so.

Considering the fact that students pay for printing, Nunez thinks there should definitely be more printers around campus and said it would be helpful to have printers in the residence halls.

LoSchiavo mentioned though there will always be printers in Quinn library, it would be nice to have them elsewhere. According to both Shanburg and LoSchiavo, though staff members are there to support students with whatever they may need, students should speak up if they want printers to be added or changes to be made.

“If you students want something, don’t be afraid to say so,” she said. “Because administration really will listen to you.”

Though printing in Quinn Library is a continuous battle that students and faculty members have to face, students can rest easy knowing that staff members are aware of the problems that take place and the battle is not one to be fought alone.