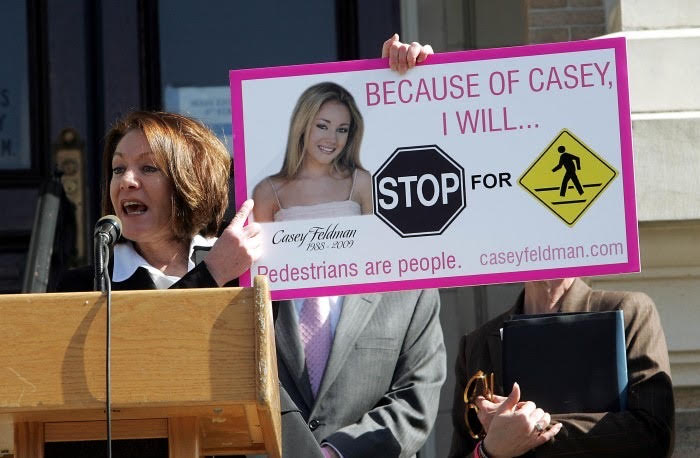 Diane Anderson holds up her daughter's image to fight for a new pedestrian safety law in New Jersey. The law was passed on April 1, 2010.

It has been ten years since Casey Feldman was struck and killed by a distracted driver in Ocean City, New Jersey. Casey, who served as the 2008-2009 News Editor of The Observer, was about to enter her senior year at Fordham College at Lincoln Center (FCLC) and pursuing a career as a journalist. While that all came to an end on July 17, 2009, her parents continue to make sure Casey still has an impact on the Fordham community today. “She was so kind-hearted, so loving and always found time in her busy, busy schedule to help those less fortunate,” said Dianne Anderson, Casey’s mother. “That included volunteering at a soup kitchen, a women’s shelter and a no kill animal shelter.”

Helping those in need was a huge part of Casey’s life. Her best friend and roommate at Fordham, Kelsey Butler, FCLC ’10, said, “For example, when she saw someone who was homeless and she was walking home from dinner, she would always give her leftovers to that person.” Butler now serves on the board of CFMF.

Casey was also a passionate journalist. In her time at The Observer, she had written over 20 articles tackling topics ranging from HIV and AIDS to the mental health of college students. Her suitemate, Janine Repka, FCLC ’10, said, “I think she was always looking for something that was a little bit more meaty than your average college campus story.”

Her father, Joel Feldman, said that in the weeks after Casey’s death her colleagues at The Observer expressed their condolences. One colleague revealed to him that, “Casey taught them that each and every person has a unique and beautiful story, and we need to tell stories because telling stories changes lives.”

After Casey passed, Feldman and Anderson began working with legislators in New Jersey to revise their Pedestrian Safety Law. The law previously stated that motorists are required to yield for pedestrians. The new law, which her parents refer to as “Casey’s Law,” now requires motorists to stop and remain stopped for pedestrians in marked crosswalks or at intersections where there are no marked crosswalks. This was the beginning of their path into advocacy because of Casey.

Anderson, along with Feldman, tries to preserve and project Casey’s character and values into the world today through their foundation, The Casey Feldman Memorial Foundation (CFMF).

Casey’s vigor to find those “meaty” stories translates to the work her parents do at the foundation. What she stood for is championed by her parents through their unending support of volunteer work, scholarships and grants, and their fight to end distracted driving.

The mission of their foundation “is to carry on things that were important to Casey,” according to Butler. Every year on the date of Casey’s death, which those that were close to her refer to as her “angelversary,” the foundation sponsors a day of service. In 2018, Anderson organized it with their local animal shelter, Providence Animal Center, inspired by Casey’s love for animals.

Matthew Thornton, who was Casey’s boyfriend, attended and said, “it’s an opportunity for people to go and kind of live the experience that (Casey) would have. (Dianne and Joel) put forth that kind of selflessness into the world by cleaning up and rearranging in the shelters and cages, dating the food that gets donated to these shelters.”

The foundation is also focused on financially helping current students who exhibit qualities like Casey. At Casey’s high school, Springfield High School in Pennsylvania, they offer a yearly scholarship. Thornton assists the Feldmans in choosing the recipient, in which they look at student’s essays and activities for qualities that align with Casey’s. Casey’s mom said that they do not solely focus on the students with the best grades but those who give back to the community and show a commitment to volunteerism.

The foundation also offers a scholarship here at Fordham University for communications students to perform an unpaid internship for those who would not be able to afford it. However, since New York State is changing its laws on unpaid interns, Joel Feldman said, ”We’re going to be redirecting the focus of that entirely to supporting The Observer in different ways.” Since Casey’s passing, the foundation has financially supported The Observer.

“The Feldmans wanted to do something to keep Casey’s memory alive,” said Elizabeth Stone, Ph.D., professor of English at FCLC and advisor to The Observer at the time of Casey’s death, “So together we talked through what would be useful and most help The Observer.”

Stone and the Feldmans devised three ideas that were then implemented. The first was the internship scholarship for communications students mentioned above. The second was underwriting funds for educational purposes, such as sending more students to journalism conferences and hosting speakers. The third was providing funds for hardware and software The Observer otherwise wouldn’t be able to have.

Additionally, the foundation takes on interns from The Observer. This semester, it is Copy Editor Melanie Riehl, FCLC ’22. She writes articles for CFMF and has recently spoken with a mother and father who had lost their son to distracted driving. “They turned that grief into advocacy, and they decided to fight for the Minnesota Hands-Free Law,” Riehl said. Riehl put together an article that will be published. Writing these articles gives aspiring journalists like Casey opportunities to practice and hone their craft, as well as increasing awareness for distracted driving.

A large project of the Casey Feldman Memorial Foundation is End Distracted Driving (EndDD). EndDD is spearheaded by Casey’s father. About three months after Casey’s death, he had a realization, “I could have been that driver because I drove distracted all the time.” Her parents wanted to do something to raise awareness against distracted driving.

EndDD has a network of over 500 volunteers who give speeches to schools nationwide on how to not become a distracted driver, all without cost to the school. Feldman himself has given over 700 presentations, and EndDD has reached over 450,000 students.

EndDD partners with the Children’s Hospital of Philadelphia to develop methods to deliver an effective presentation. They center their presentation on respect. By establishing the fact that most students would consider themselves respectful people, Feldman said, “There’s really not a whole lot that’s respectful about driving and looking at your phone instead of the road. Respect for others, to me, is a full time value. It’s not something we just do when it’s convenient.”

EndDD is always working on how to make their presentations as effective as possible by providing free educational materials, driving agreements, quizzes, surveys and public service announcements. Every year they also sponsor a teen distracted driving video and meme contest. EndDD found that through creating a video on distracted driving, students are learning about safe driving practices. Through this knowledge, it is affirming the fact that the students do not want to be a distracted driver themselves.

Riehl said that the mission of EndDD has impacted her personally. “If you’re someone who’s lost someone else or a family member and you tell a distracted driving story, it hits home differently for people who hear it,” she said.

EndDD focuses their mission on the people who really need to hear it — the next generation of drivers. In December, they are launching a new program directed at elementary schools — the first of its kind in the country. It’s going to teach children to recognize when their parents are distracted and the communication skills to articulate that they feel unsafe. This will create fewer drivers on the road now and in the future.

Repka got a chance to speak at her own high school with EndDD. She said it was one of the most impactful moments because she got to see Casey’s story impact the next generation. “I got to be able to say to them — you’re going to go on to the rest of your life and you’re going to meet people who are going to become your best friends. Hold them close and cherish them,” said Repka. By telling stories that hit so close to home, it resonates with students. No one wants to be the driver that killed someone’s best friend, partner or child because they had to check their phone.

Here at Fordham, not many students get behind the wheel of a car daily because of subways, buses, taxis and Ubers, but even as a pedestrian or passenger, there are still ways to help end distracted driving. Butler said, “As a passenger you have an ability to make an impact. If you’re perhaps driving around with friends and they are driving distracted, you can always speak up and say something.” Butler said it can even be as easy as saying, “Why don’t I change the music for you so you can focus on the road.”

In the past 10 years, CFMF and EndDD have both grown, but their mission stays the same — projecting Casey’s generous spirit and ending the act that took it all away.

The Feldmans took what is the worst tragedy a parent can face and turned it into a mission for good. In spite of his daughter’s passing, Feldman said, “I think I’m about about the luckiest person in the world because I get people, mostly students coming up to me and talking to me and saying how it’s changed their lives. They’re being saved.”

Casey wrote articles because every story she told had the capacity to make the world a better place, even if it was just slightly. The work done through the foundation and EndDD does the same.

Matt Thornton lauded about the Feldman’s approach of grief and even adopted it himself. He said, “You either move forward and find the best out of what you can or otherwise it leaves people kind of paralyzed and empty. I don’t think that people want to live their lives in that vein.”

The Feldmans’ career of volunteering and advocacy helps others in need, but in doing that they are also spreading a little bit of Casey’s heart wherever they go. Because of that, Casey’s memory and her values will live on in all who are touched by her story.