Kyle Martin: From A10 Champ to Potential Pro Star 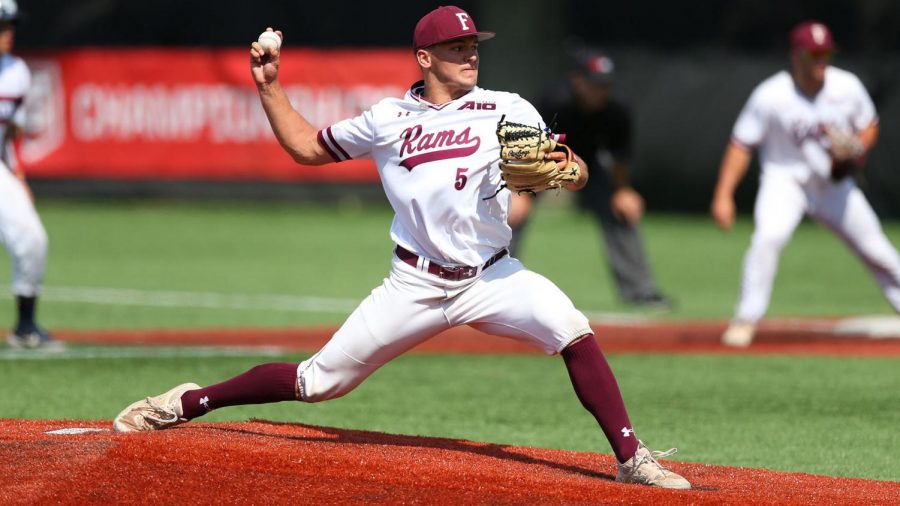 No Fordham student had a better summer than Kyle Martin, Fordham College at Rose Hill (FCRH) ’20. In May, while most college students were unwinding from finals, Kyle Martin and Fordham baseball won the Atlantic 10 (A10) Championship against Dayton University in extra innings. In June, as many of his peers began summer jobs and internships, Martin was selected by the Orioles in the 15th round of the 2019 MLB Draft.

The summer began with an incredible stretch of success for the Fordham relief pitcher, starting with a college championship and ending with a minor league contract. However, for all of the success, the end of his college career came in two parts: an incredible save and a devastating home run.

In the second round of the A10 Tournament, Fordham, the 4-seed, played against Virginia Commonwealth University (VCU), the 1-seed. Each team scored in the first inning, but Fordham scored again in the fourth to take a 2-1 lead. The score remained unchanged going into the eighth inning when Martin took the mound. He was called on for a six-out save, one of the most difficult tasks for a relief pitcher. It required him to throw two scoreless innings instead of the usual one. Even under normal conditions, it is a very difficult feat to accomplish.

After working his way through the eighth without allowing a run, lightning struck and the skies opened up in earnest. A rain delay postponed the game for nearly an hour and a half with only an inning left to play. Martin stepped off the field in the eighth inning at 3:48 p.m. and would not step back on for the ninth until around 5:30 p.m.

Looking back, Martin admitted, “I was tight. I was stressed out, had to sit down for about an hour and come back out for the ninth. I’d never done it before.”

With a cold arm and a one-run lead, Martin and Fordham were only three outs away from advancing in the tournament. He allowed a single, but the other three batters he faced had no such luck. Each one struck out swinging, and after nine long innings and a rain delay, Martin and the Rams finally secured their major upset against the best team in the conference.

Following another win, Fordham advanced to the championship game against Dayton. With a 3-0 lead going into the top of the seventh inning, they found themselves in trouble. Anthony Zimmerman, Gabelli School of Business at Rose Hill (GSBRH) ’19, had allowed an unearned run and walked two batters. With men on first and second, Martin entered the game. Despite allowing another run on a sacrifice fly, Martin largely reduced the damage and preserved Fordham’s lead, 3-2.

Playing with a one-run lead, Fordham entrusted Martin to finish the game. He breezed through the eighth inning and secured the first two outs in the ninth.

“I was one out away from ending it and the kid hit the home run,” Martin remembered ruefully.
With no men on base, Martin was one out away from victory when a long fly ball flew into left field. Players, coaches and fans watched on as a championship slipped through their fingers. Martin had given up a game-tying home run with two outs in the ninth inning.

Martin finished the inning with a strikeout, one batter too late, to keep the score tied, 3-3. At that point, most coaches would pull their pitcher after nearly three innings of work. However, according to Martin, taking him out was never an option. “Now, I had to keep going, but at that point, I just didn’t want to lose. That desire to win just took over, especially since I felt like it was on me.”

In extra innings, Martin went back out for the 10th and 11th. In the 11th, he faced trouble again with men on first and third base with two outs. He forced his 20th and final batter to ground out and escaped his fifth inning of work without allowing another run.

In the bottom of the 12th inning, Fordham scored on a walk to win the A10 Championship. While Martin was responsible for a few more innings of play, he was just as integral to their eventual victory.
Martin claimed that the team’s mindset never changed throughout the season. “We tried to focus on just winning one game at a time, go 1-0 every day, every game, and that mentality just carried us through. It worked every time,” he said.
A few days after Fordham’s championship, Martin traded in his Rams’ maroon and white colors for the orange and black of the Baltimore Orioles. He was selected in the 15th round of the MLB Draft. He is the 37th Fordham baseball player to be drafted in the school’s history.

“It was actually very stressful throughout the year … When it got to like, a week or two before the draft, that’s when I started getting nervous, trying to amp it up. I had a good idea of who I was going to, but I had never heard from (the Orioles) at all,” Martin said. Despite the initial uncertainty, the Orioles obviously saw something in the Rams’ product. Following the draft and his contract signing, he began playing with the Orioles’ minor league team, the Aberdeen Ironbirds, in late June and will continue in their farm system next spring.

Despite Martin’s personal success, he gave Fordham and its baseball program the credit for bringing him to the professional level. On Fordham, he said, “I feel like, here, I became more of a man, more of a person. I think it helped me to become a better person overall.” As Fordham baseball continues on in their quest to “go 1-0 every day,” it will never forget the contributions of one of its most prodigious relief pitchers as he moves on from college to the chaotic world of professional baseball.