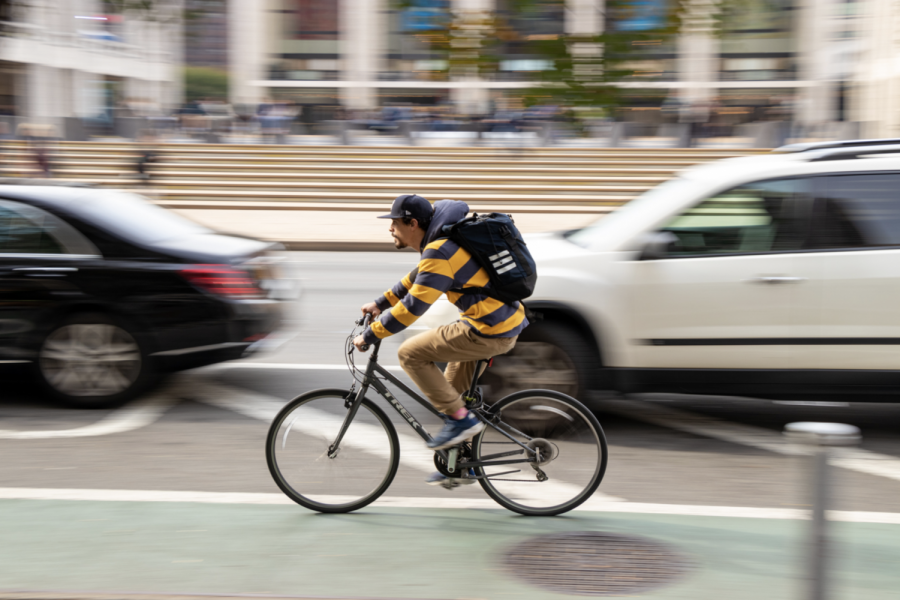 While students see the value of using bike lanes to get around, many are apprehensive due to the recent spate in cyclist deaths across the city.

On June 25, after a series of cyclist fatalities, Mayor Bill de Blasio announced the Green Wave: A Plan for Cycling in New York City. He told New Yorkers that “no loss of life on our streets are acceptable.” Now, across the street from Fordham’s Lincoln Center (FCLC)’s campus, those initiatives are coming to life.

Cyclists in New York City are dying at an alarming rate; after only 10 deaths in 2018, 23 bikers have already died in 2019. In response to what Mayor de Blasio is calling a citywide “crisis,” the Department of Transportation (DOT) is rolling out its “Green Wave” initiative to try and better protect New Yorkers.

William Bruce, Gabelli School of Business Lincoln Center ’21, uses bike lanes while roller-skating in the city. However, he says that there are not enough lanes around the city and that they are often filled with cars or pedestrians. “The bike lanes are barely any safer than the road itself,” said Bruce.

Lulu Peng, Fordham College at Lincoln Center (FCLC) ’20, also said that although she recognizes how dangerous biking can be, it is an efficient way for her to get around the city.

Recent construction on the northeast corner of 60th Street and Columbus Avenue aims to protect city-goers by introducing a protected shoulder and a pedestrian island. The island ensures that pedestrians who do not stand on the sidewalk corner are not in the bike lane, decreasing the chance of potential collisions.

Over the summer, new bike lanes were also implemented between 52nd and 72nd Streets on Amsterdam Avenue, which runs on the west side of the Lincoln Center campus. There were 277 traffic-related injuries on those city blocks between 2012-2016 — two of which were fatal. Cyclists were killed on 55th Street and on 72nd Street.

The plan repurposed one travel lane on Amsterdam Avenue into parking spaces, which act as a divider between bikers and moving traffic. An added benefit of this design was the shortening the length of street crossings for pedestrians, as pedestrian safety is also significant concern for the DOT.

“I think that the protected bike lane is going to be the best option for safety,” said Bruce. He said that while he used to try and only use the protected Hudson path, he now feels more comfortable using the bike lanes around the city.

Not everyone is satisfied with the improvements. On June 9, cyclist activists staged a “die-in” in Washington Square Park. They felt that the city was not doing enough to ensure Vision Zero, a strategy that was implemented five years ago to eliminate all traffic fatalities.

“I would never bike in New York City unless it was properly protected bike lane,” said Corina Fuentes, FCLC ’21. Although she considers herself environmentally conscious and wants options to lower her carbon footprint while commuting, she says that “biking is just so dangerous.”

However, members of the city council are not taking these concerns lightly. The Streets Master Plan bill, which is expected to pass on Oct. 30, will allocate $1.7 billion to build 250 miles of protected bike lanes and other street upgrades.