Regulations Made to Protect Students Removed by NACAC 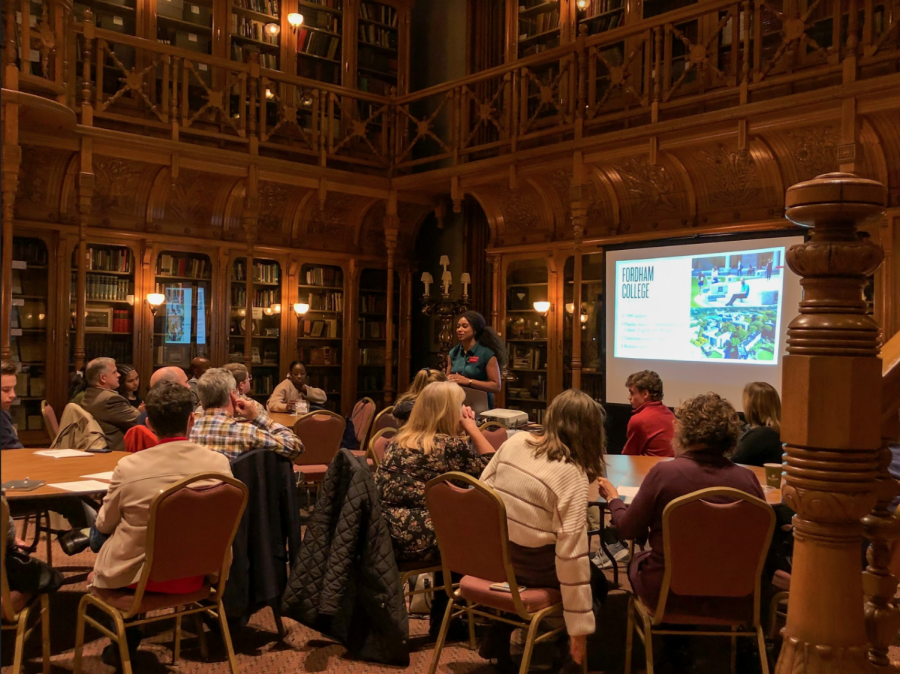 Fordham Admissions event at St. Ignatius College Prep in Chicago, Ill. The change in the NACAC's code of ethics means that colleges can now offer more admissions incentives to students, even after they've rejected their official offer of admission.

On Sept. 28, the National Association for College Admission Counseling (NACAC) changed its code of ethics, affecting colleges and universities around the country. The changes removed three main regulations — the laws that prohibited colleges from offering incentives to early decision candidates, restrictions on “poaching” students who have committed to another university and preventions on offices to reach out to students from former applicant pools.

Before the NACAC decided to repeal these provisions, the U.S. Department of Justice (DOJ) launched an investigation to determine whether these policies violated federal antitrust laws, which exist to protect fair competition and prohibit monopolies. The laws were initially created with the intent to protect students, however, the DOJ appeared to be interested in the aspects that limited college action.

According to a letter from the DOJ that was obtained by Insider High Ed, the DOJ’s investigation centered around an agreement “to restrain trade among colleges and universities in the recruitment of students.”

In September 2019, the NACAC learned that the federal government planned to file an antitrust suit against them. In a vote of 211-3, the NACAC decided to get rid of the policies in order to reach a settlement with the DOJ.

Stefanie Niles, president of NACAC, also told Inside Higher Ed that these changes occurred due to “a desire to preserve this organization.” Niles also expressed that even though the laws are gone, specific colleges do not have to abandon them.

While Fordham is a member of the NACAC, not all colleges are. Regardless, the change in provisions allows for an increase in competition among admissions offices nationwide. Now without the first provision, colleges will be able to offer incentives, such as more financial aid, priority registration or housing to early decision candidates.

“Providing incentives for Early Decision (ED) will likely encourage students to apply under the binding plan,” said Patricia Peek, the dean of undergraduate admissions. “While ED is appropriate for some students, its binding provision is not ideal for all.”

The other three provisions that have been removed affect students post May 1, the national deadline for students to submit their deposits to the college of their choice, as students will be able to continually receive updated offers of admission or financial aid throughout the summer.

As a result, students could be forced to make college decisions in the summer before their college career begins. The change in laws now also allows universities to attempt to recruit from previous year’s applicant pools for transfer students.

“College deposit amounts will soar to increase the cost of walking away from a commitment,” Jon Boeckenstedt, vice provost of enrollment management at Oregon State University, wrote on his Admission Blog. “If you can’t take it out on your competitors, you can make switching costs for consumers higher.”

Fordham does not intend to implement changes to their admission process immediately. Instead, they plan to observe the changes and see how they impact students.

With the change in the Code of Ethics, Peek is mainly worried about the stress that will be put onto incoming students. Since students may now have to make decisions late into their summer, Peek worries that those with limited access to college counseling will be faced with college choices right before they go to college, making the process more stressful for them.

Instead, Fordham intends to focus on how the changes in laws will affect its applicant pool before making any alterations themselves. Fordham College at Lincoln Center’s retention rate for second-year students has been relatively stable since 2010.

The largest drops tend to be with third-and fourth-year students, but over recent years, that retention rate has increased. According to Peter Feigenbaum, the director of Fordham’s Office of Institutional Research Team, the most common reasons for students to transfer are academic challenges, financial stress, homesickness and emotional issues.

“At Fordham, we don’t anticipate this change having an immediate or substantive impact, but we will need to monitor it closely,” stated Feigenbaum. “Retaining our students and providing them with a high-quality educational experience are paramount, regardless of the shifts in the professional ethics code. This will remain a top priority at Fordham in the years ahead.”