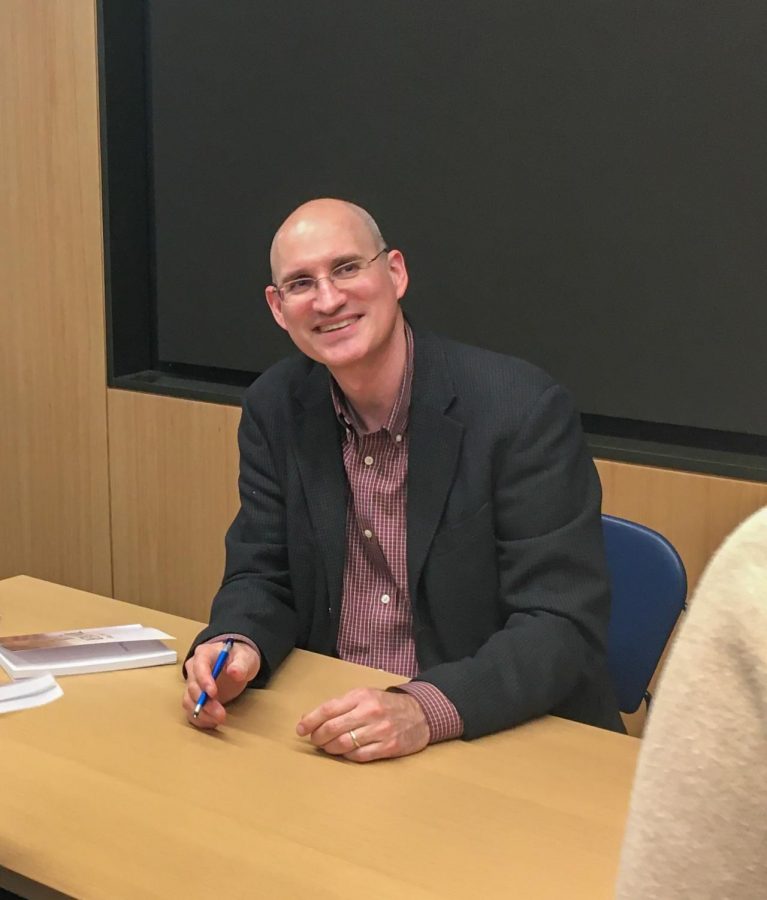 Following his talk about "Thicker than Mud," Jason Morris stayed to sign copies for students.

“Some of you are probably thinking, ‘I didn’t know scientists wrote books,’” said Natural Sciences Department Chair Jason Morris, Ph.D., to an intimate crowd of 30 students, alumni and faculty from the Fordham College at Lincoln Center (FCLC) honors program. “Shouldn’t folks stay in their lane?”

The frequent laughs at his comments, the enthusiastic way they asked questions of the professor and the fact that they came at all proved that this group didn’t think so.

The occasion was a talk titled “Thicker than Mud: A Conversation with Jason Morris,” held in the Lowenstein second floor lounge on Oct. 24. Over falafel, hummus and tabbouleh salad, Morris’ current and former students and colleagues engaged with him as he discussed the process of writing and now releasing his debut novel — a project two decades in the making.

“Morris looked so happy just sitting at the table before the event started,” said Jenny Han, FCLC ’22. “He had the biggest smile I’ve ever seen him have.”

Jalen Glenn, FCLC ’16 and one of the few non-honors affiliates present (along with Morris’ parents), was the first to acknowledge the palpable sense of excitement and community in the room. During his brief introduction to the program, he admitted to jealousy toward the close-knit bond among the members of the program. He provided a brief overview of Morris and honors program director Karina Hogan, Ph.D. — and then, met with copious applause, Morris took the lead.

He began his presentation with prepared remarks about the book’s plot and relevance to his own life, and spent the second half answering students’ questions on the topic. “Thicker Than Mud” follows Adam Drascher, a fictional archaeology professor who loses his grandfather on the same day he finds a tablet referencing an enigmatic biblical group called the Healers. The discovery aids in his research as he is on the brink of tenure, and he uncovers family secrets as he learns more about the ancient coalition.

Morris pointed out that “you can only write what you know,” so “Thicker Than Mud” was drawn in part from his own experiences. But he was sure to clarify that though the book is relevant to his life, it is not about his life, though it may seem so at first glance. Drascher is Jewish and works at a Jesuit college in the Bronx, after all. The one semi-autobiographical plot point relates to the death of Drascher’s grandfather; Morris lost his own grandfather in 1998, and the idea for the novel began to manifest soon afterwards.

“I thought about my first emotional response for years afterwards,” Morris said, in reference to his grief and how he found it difficult to share with others. “I felt that I needed to try to tell the story of someone who couldn’t take that next step — someone we could sympathize with and understand but who couldn’t mourn in community. So that’s how the idea for writing something began percolating.”

In the process, Morris took up research on topics ranging from Judaic archaeology to 1960s jazz music to the logistics of flying out of Israel (it involves a layover in Ukraine, for those curious). Ironically, though, much of his presentation focused on the apparent obstacles to the release of “Thicker Than Mud.” Morris mentioned his slow writing pace (“Please look for my second book in 2049,” he said seriously) and his lack of attachment to his own prose. When one student asked if he had trouble deleting his work, he said he has a “hair-trigger gag reflex” for his writing.

“I held my pen in my fist,” he said of crossing passages out as he wrote and rewrote the novel. He recalled feeling glad each time that “the world doesn’t have to read that paragraph!”

Among the reasons he cited for the long time between the book’s inception and its publication, a lack of time was not one of them — an unexpected response from a man juggling research, a family, the workings of an entire department and multiple classes’ worth of grading. He found that he could write a lot in short amounts of time: inspiration found him on the train, in the shower and during the night, especially in the novel’s early stages.

“Sometimes you wake up in the middle of the night with a conversation in your head, and you can’t go back to sleep until you write it down,” he said. Such bits of time in between a busy schedule eventually added up to a first draft originally titled “The Healers” which, yes, he hated.

Morris remembered his wife looking at one draft and saying of some of the more academic sections, “I see you being a professor; I want to get back to the story.” Fellow professors would look at the same draft and say the opposite, requesting more linguistics discussion. Former Theatre Program Director Matthew Maguire once said the book needed “more tension in Act 2” (to which Morris replied, “I didn’t know there was an Act 2”). Hogan told the audience that she “liked it from the start, but it did get better” as she read each revision.

From all this feedback, Morris concluded that “Thicker Than Mud” would never be perfect for every reader. Perhaps it’s still not perfect for him, either, but his pride in the finished product is undeniable. He expressed his hope that everyone who reads it, how many or how few they may be, gets something out of it.

“If people spend enough hours enjoying reading it as I spent enjoying writing it, it’s not a vanity project anymore,” said Morris.

After the talk, nearly everyone eagerly went to the front of the room to buy a copy of the novel for Morris to sign. He mentioned that he has an idea for a second novel, which will be more “insane” and “messianic” as compared to the more reflective, subdued tone with which he described “Thicker Than Mud.” With this declaration, the event made one thing certain: He has a dedicated audience lying in wait for 2049.

“Thicker Than Mud” is available on Amazon and at Barnes and Noble.