Six Nights of Punk Rock in a Reimagined ‘Twelfth Night’ 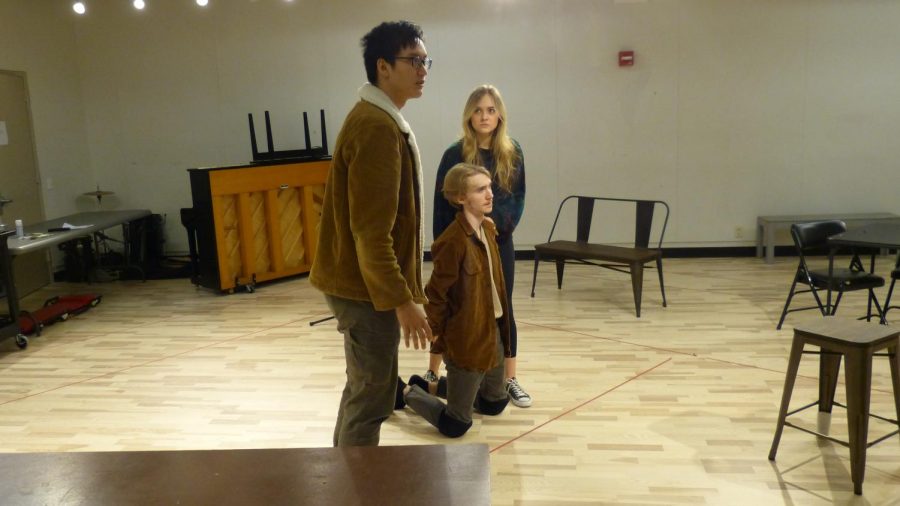 Continuing with the theatre program’s trend of its most recent mainstage play, “The Wolves,” this reimagined piece provokes compelling questions about gender and societal norms while integrating themes of sexuality, power and struggle into its modern adaptation.

Despite being a play and not a musical, “Twelfth Night” contains five original music pieces, the first being the ’80s pop-influenced opening number, “My Lady is a Madman.” Cast member Ashley Everhart, Fordham College Lincoln Center (FCLC) ’20, helped write the score as co-composer and music director, as well as playing one half of the Festes duo with co-composer Solomon Margo, FCLC ’22.

A classical musician and singer, Everhart cited bands such as Tears for Fears, Sleater Kinney, the Eurythmics and The Cranberries as inspiration for her and Margo in developing the show’s music.

The integration of pop rock music isn’t the only modern aspect of this production; cast members are also discovering new meaning in the play’s presentation of gender and sexuality. Eliana Rowe, FCLC ’20, plays the countess Olivia, who falls in love with a man she believes to be Cesario but is actually the female character Viola in disguise.

“The show kind of has two different forms that it takes: on the nose what Shakespeare wrote, or the other version which is very, very gay. So, we’re really jumping into that,” Rowe said. “I think what got me really pumped about the show is when we heard that the vision for the piece was that Olivia and Malvolio were going to be both cast either as female-identified or male-identified to make a point about what we laugh at and why we laugh at different kinds of love.”

Malvolio, the stiff and vain servant of Olivia, is portrayed by Chloe Rice, FCLC ’21. This character, who is normally presented by a male actor, spends the play attempting to seduce and marry the uninterested Olivia.

“The story changes a little bit because Malvolio is not only cast as a woman, but he is now a female character. So, when you have a character who used to be male attracted to a female and is now an androgynous lesbian woman, you run into differences in what we laugh at,” Everhart elaborated. “I think by changing Malvolio’s sex, we steer this play in a direction that is going to more deliberately comment on gender and sexuality in a way that can be very clear of our intention, as opposed to just playing at undertones.”

When asked how she might describe the ultimate meaning of the piece, Rowe paused to reflect before answering, “It’s about what it means to use your power and how you use your power. It asks what you do when you can’t get what you want. And then also, what does that mean for how you treat other people so that you feel more powerful? I think that’s interesting because it happens all of the time in the world, so I think this is a great show to have this conversation about in a way that’s not condemning, but eye-opening. It reminds us to be aware of how we use our power.”

For Everhart, the show’s message is represented by one of the opening song’s lyrics: “Could I make you care if I just chopped my hair?”

She said, “I really love that as an encapsulating idea for the show – this idea that asks, ‘How much do I have to change surface-level things about me for you to see me as someone you could love?’ I think it allows you to reflect on how we try to change ourselves to be what other people think they can love, instead of saying I am exactly who I am and I’m 100% lovable because of that.”

Everyone can catch Everhart, Rowe and the rest of the cast in the inspired “Twelfth Night” in Pope Auditorium at 8 p.m. from Nov. 6-8 and 14-16.