What Does It Mean to Be Latinx? 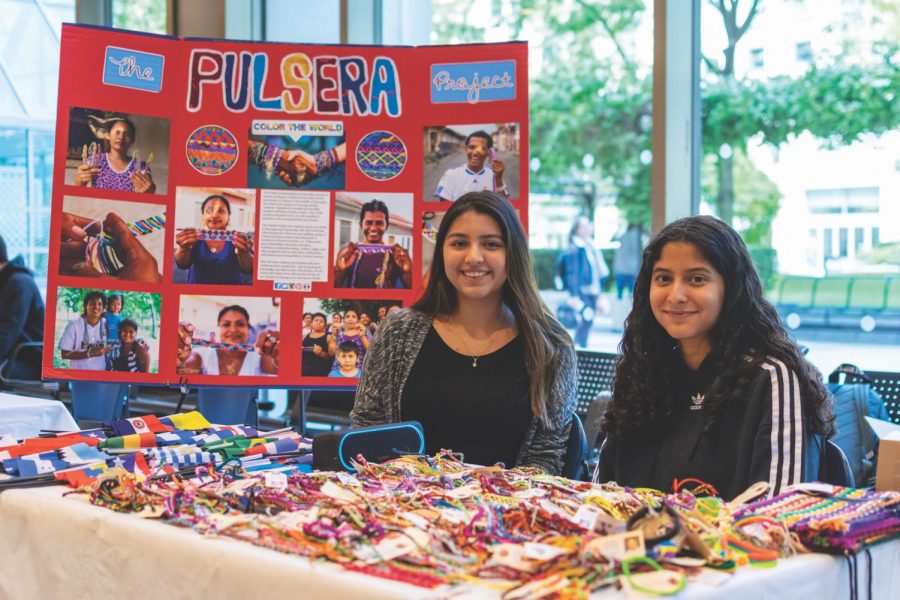 Members of SOL sell colorful bracelets from Nicaragua and Guatemala to raise money for communities in Central America as part of the Pulsera Project.

From Sept. 15 to Oct. 15 of each year, The United States of America observes Hispanic Heritage Month. At more than 14%, Latinx students comprise the largest ethnic minority across Fordham’s campuses.

However, the identity of having “Hispanic heritage,” or simply defining what it means to be “Latinx,” is a complicated one, and a conversation that draws upon hundreds of years of history, colonization and individualism. To explore these topics, I sat down with Angel Quiah, Fordham College Lincoln Center (FCLC) ’20 and the public relations officer for the Student Organization of Latinxs (SOL).

SOL’s purpose, said Quiah, “has just been to create a space for Latinx students in particular — And also for people who are not Latinx — to learn about our culture. It’s a very diverse culture. It’s not monolithic by any means.”

It’s precisely because “Hispanic culture” is so diverse that I wanted to speak with Quiah. I myself am Mexican-American, born and raised on the southern border of the United States and Mexico. I’m the first in my family, after nearly 13 generations, to leave the Texas-Mexico border area. As a straight, “white-passing” male, I had the benefit of assumed respect as well as fluency in Mexican culture because of my familial roots. My experience with being Latinx, however, was not the same as Quiah’s.

“I’m from New York. I’m from Jackson Heights, in Queens,” said Quiah, who is of Colombian ancestry. I found Quiah’s insight particularly valuable because of her academic and professional background in the subject. She is a Latin American Studies major who hopes to go into social work. “It’s kind of the only work that’s rewarding especially when it comes to Latinx and black kids because they’re honestly the ones that need the most support,” she said.

Yet just based on our backgrounds alone, something was already evident: how was it that the two of us, having ancestors from two different countries on two different continents, could both proudly claim the same “Latinx” identity? Further, why was it that we chose to use an English word created in America to describe ourselves?

(“Latinx” was said with an Anglicized pronunciation, “lah-ten-ECKS,” throughout our conversation.)

“When I first heard of the term Latinx,” said Quiah, “I was just like, ‘This is not a linguistic phenomenon that exists in Spanish.’ I’ve never heard anybody refer to themselves as like, ‘Latin-equis’ or something like that.” (“Equis” is the pronunciation of the letter “x” in Spanish.) However, Quiah and I both proudly choose to wear the label to describe ourselves.

Quiah described why she preferred the term. “We have adopted this term and really stood behind it, because we kind of stand in an intersectional place, right? We’re American, but we’re also Latinx,” she said. “While it may not be necessarily linguistically correct with the ‘Gramatica Espanola,’ or whatever, it doesn’t really matter because it’s like: that’s the term that we’re using to describe ourselves. We prefer a gender neutral way to describe ourselves, so we’ll come up with one because we can.”

The idea of a gender-neutral term to describe our community was more than just academic to Quiah. It was personal. “In summer of 2019, after a lifetime of dysphoria, I found the courage to admit to myself something I’d always known, that I am transgender, and to allow myself to start transitioning,” explained Quiah when asked about her gender identity. She now confidently uses she/her pronouns, and had faith that the more inclusive “Latinx” is going to replace the word “Hispanic” in the years to come.

While we both agreed about the importance of a gender-neutral term to describe our community, there was an elephant in the room: how could we feel comfortable assigning just one word to so many people? “Latinx” isn’t a race, it isn’t a language, it isn’t a culture. A Latinx person can be German-Jewish — there are many people like that in Mexico. Or Japanese-Native American — it’s a very common mix in Peru. They could be black and speak Hindi — many citizens of Paraguay are. Each person in themselves has unique charecteristics and a unique understanding of what it means to be “Latinx.”

Quiah’s perspective was that the identity is formed around experience. “Yes, we come from different places and being Latin American or Latinx is not a monolithic identity,” she said. “But I will say — I guess from an activist perspective, when we’re in the US, nobody cares. They don’t care where you’re from. They see your skin or they hear how you speak and they’re like ‘OK you’re Latino. OK. You’re Hispanic.’ They’ll reduce you down anyway.”

At least in the United States, she said, “I think because many of our experiences are so aligned in that sense — unfortunately, negative experiences —  I think it is useful to use an overarching term like Latinx.”

Update Friday, Oct. 18: A previous version of this article stated that Angel Quiah is FCLC ’19. She is FCLC ’20.