UPDATED: Clearing the Air: Addressing The Misconceptions about “E-Cigs”

"Vaping" is a term misunderstood by many, even by those who do it.

The use of electronic cigarettes (e-cigarettes) has risen in popularity over the past five years, yet after nearly 1,200 reports of lung disease and 26 deaths across the country, users are left with questions about what an “e-cig” actually is, and more importantly, what the devices are doing to their health.

The recent outbreak of vaping-related illnesses, often referred to as a public health epidemic, has highlighted confusion in the public’s understanding of what chemicals are actually in the devices.

Over the last month, The Observer conducted an anonymous survey to gauge the misconceptions of Fordham Lincoln Center students about vaping, as well as gather information about drug use on campus. 56% of students reported to have used vaporized THC at least once across our 249 responses, and nearly every student we spoke to understood how common these devices were on campus and in New York City in general.

Most commonly, law enforcement, media outlets and regulatory bodies refer to all forms of handheld vaporizer inhalants as “e-cigarettes.” However, that term is inaccurate.

E-cigarettes are battery-powered devices used to inhale an aerosol, made up of a cartridge that contains a chemically rich liquid, an atomizer used to heat the solution to vaporization, a battery to provide electricity for the chemical reaction and a filtered mouthpiece.

Although they are advertised as a safer alternative to traditional cigarettes, e-cigarettes are known to contain cancer-causing compounds and toxic heavy metals that can result in adverse health effects. Further, there are dozens of commercial variants which have, for the most part, gone untested and unregulated.

While many think that this technology is only used to deliver nicotine, it has also been adapted to deliver psychoactive ingredients like tetrahydrocannabinol (THC), cannabidiol (CBD) and butane hash oils (dabs).

To the people who use them, these drug inhalants are not the same as e-cigarettes. “I think they’re very different,” said one anonymous Fordham student. “In the culture surrounding it, the budget and effects, and also the type of person that would do it.”

E-cigarettes make a user “feel focused,” said the student, much like a traditional cigarette. However, they were clear that the device used to inhale vaporized THC was “completely different.” According to the student, they refer to the vaporized THC device as a “cart” (short for cartridge) and battery. “Carts are an effect-inducing, altering kind of thing,” he said.

“The battery, you can get at any smoke shop,” said another student. “Because the CBD and nicotine carts are legal, I think. That’s how you get it through airports, because they can’t tell if it’s THC or CBD.”

In the New York City area, these battery-cartridge vaporized THC devices are colloquially known as “dab pens.” That term, however, is also incorrect. Dab pens are used to release a small liquid “dab” of THC into the mouth, or inhale a small amount of THC using a different, wax-heating mechanism. These devices are very rare in New York state and more easily found in areas where they are legal, such as California.

The inconsistency in legalization between states has also contributed to the confusion about these devices on a campus that draws many out-of-state residents. According to the survey results, more than one-third (38%) of students were not aware that all commercially available or modified vaporized THC devices are illegal in New York state. 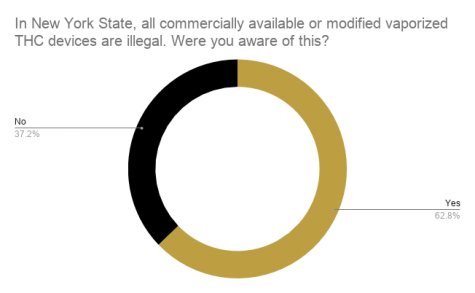 “My dealer gets (carts) shipped from a state where they’re legal,” said one student. “When I purchase them, they’re packaged and usually say ‘only for sale in California, not for resale.’” Many students speculated that it was “unregulated” or “black market carts” responsible for the recent deaths, including one in the Bronx and another in New Jersey.

The Centers for Disease Control and Prevention (CDC) and the Food and Drug Administration (FDA) are investigating the linkages between the recent deaths and hospitalizations, but are currently unable to identify the cause.

The CDC reported that Vitamin E is the first potential chemical of concern for this outbreak. However, multiple Fordham students were quick to cite it as the cause. “It’s safe to assume that it is the Vitamin E oil and not THC that is contributing to these deaths,” wrote one student.

Doctors from the Mayo Clinic also believe that these lung injuries are the byproduct of exposure to noxious fumes from the amalgam of dangerous chemicals in the various vape liquids. Both the CDC and FDA have warned against using cigarettes, e-cigarettes, marijuana or vaporized THC in any form available from both legal and black-market vendors.

More than half of all respondents reported spending $0 on drugs every month. Many students left the question blank.

Complications for the scientific research behind these “carts” include the number of chemicals associated with each ingredient in the vape liquid as well as understanding the possible chemical reactions they undergo when they are heated and vaporized. Additionally, some products may have been further contaminated by unregulated sources, particularly because “carts” can be refilled by dealers and users alike.

Scientists believe the outbreak is likely due to the damaging mixture of chemicals which can burn the user’s lung tissue when inhaled. These lung damages have closely resembled the chemical burns incurred by individuals who were exposed to poisonous gases during World War I.

The New England Journal of Medicine conducted a study and found that nearly 80% of patients admitted to hospitals for these symptoms reported using vaporized THC or CBD products in conjunction with nicotine products.

Individuals with vaping-related illnesses have exhibited gastrointestinal and respiratory symptoms of the flu or pneumonia, including fevers, chest pains, nausea, loose stools, shortness of breath, difficulty breathing and fatigue. 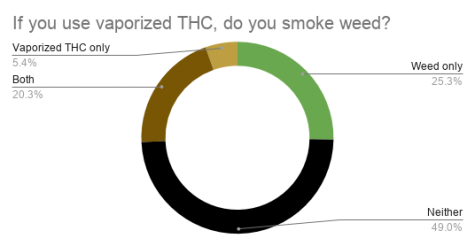 Students were also asked if they had ever witnessed or experienced “negative health effects” due to smoking weed or vaporized THC. These effects were defined as any kind of adverse reaction to inhaling a substance, most commonly reported as asthma attacks, seizures or “greenouts” — an experience where one dissociates from their body, similar to sleep paralysis.

In the survey, 25% of students confirmed that they have witnessed negative health effects due to vaporized THC use, and 12% of students admitted to experiencing effects themselves.

These statistics did not differ when it came to marijuana. In fact, 29% of students reported witnessing a negative health effect after smoking marijuana, and a similar 12% reported experiencing such an effect themselves.  One student theorized that the recent headlines had come from a wave of “laced, black market carts.” However, the data collected does not necessarily support this theory.

As headlines surface and videos of affected teenagers urging others to stop vaping circulate the internet, 37% of students reported that their opinions on vaping THC have changed. 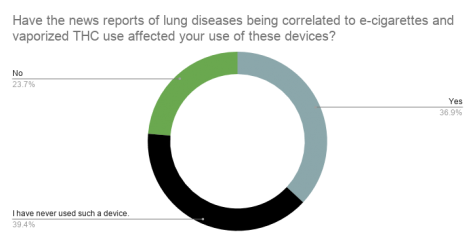 “I’ve definitely seen a shift in the culture more towards smoking real weed and avoiding cartridges,” said one student.

Another stated, “After hearing of a fellow student falling ill from their vaporized THC, I stopped using it and have not used vaporized THC since then.” Still, 24% of students reported that their opinions had not changed because of the recent national headlines.

This survey was conducted via a dissemination of an online Google form. Biases likely to have occurred include an attention bias from those who actively use drugs, a nonresponse bias from those not willing to implicate themselves for a crime, and a selection bias of sampling through personal networks. In addition, some respondents exhibited signs of or reported confusion about the structure of the survey. Discernible errors have been corrected in the data.

However, with just 2,470 undergraduates enrolled at Fordham Lincoln Center, we have reasonable confidence that our sample size of 10% accurately captures some of the information about what is known to be a large-scale phenomenon on our campus.

Update Oct. 22, 2019: Language in the article was clarified to better reflect which facts were drawn from which sources. Additionally, a typo (“One students”) was corrected (“One student”).

Update Nov. 8, 2019: An earlier version of this article incorrectly stated that Vitamin E was ruled out as a potential cause for the lung disease outbreak. The CDC announced that Vitame E was likely linked to this epidemic. This article was edited to reflect these new findings.