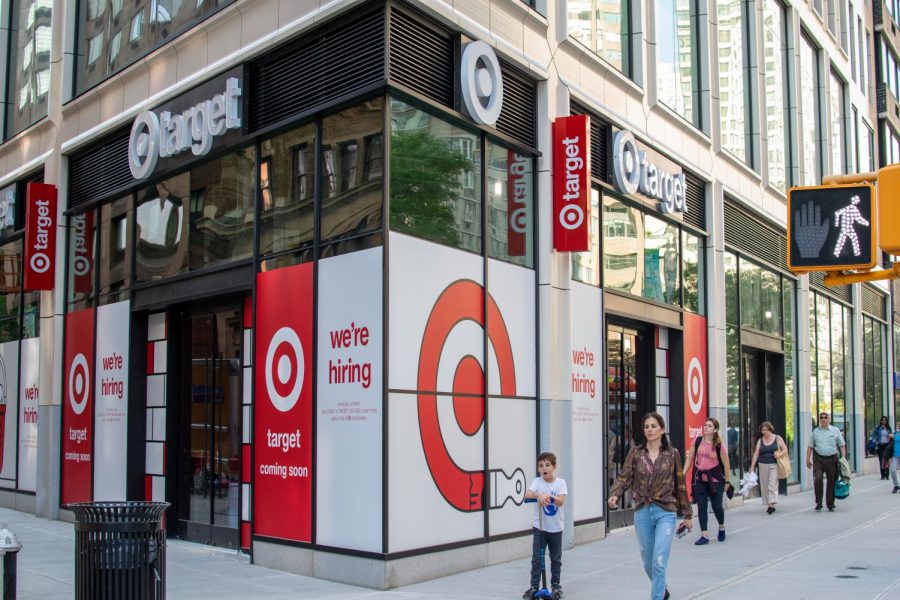 The new Columbus Circle location will be a small-format store, an approximately 34,000-square-foot facility.

Last week, the blue scaffolding on the sidewalk of 61st Street and Broadway disappeared, revealing a red bullseye, along with the promise of a new Target scheduled to open sometime before the end of 2019.

A mere block away from Fordham Lincoln Center, the latest store is one the 10 Targets that opened near or on a college campus within the last year and the eighth location in Manhattan. This new location will be a small-format store — a specialized Target built for urban communities and college campuses.

The prospect of Target, a favorite retailer for many college students with its wide array of merchandise available, caused much excitement from the Fordham community when the bright red logo appeared on the corner near campus. “I can get everything I want from Target, not necessarily stuff that I need,” Tyler Bell, Fordham College at Lincoln Center (FCLC) ’23 said, “It’s a one stop shop.”

Trader Joe’s, Whole Foods, Morton Williams, Duane Reade and Bed Bath & Beyond are staples when it comes to a Lincoln Center resident’s shopping experience. How will the opening of a mini-big box store affect the shopping habits in the community?

“The Upper West Side doesn’t have a universal home goods store,” Sam Elbedeiwy, FCLC ’22, said. For him and many others, a typical errand run involves multiple stops — grocery stores, home goods and pharmacies.

“I use ‘Shipt’ to deliver my groceries because I get snacks from Morton [Williams], produce from Trader Joe’s, but I might not need to anymore, because Target has everything,” Bell said.

Target also offers discounts to rival Bed Bath & Beyond’s College Savings Pass, like 5% off everything when using a Target credit card. “Once this Target is open, I’m going to use my RedCard for groceries, school supplies, everything. I’m going to save so much money,” Stella Pandis, FCLC ’21, said.

While Trader Joe’s offers an affordable food run, the options for name brand groceries are only available at the pricey Morton Williams, Duane Reede, CVS or online retailers. “I want to go grocery shopping at Target now because of the name brands,” Maya Addie, FCLC ’21 said. “It’ll be nice not having to go down to 34th Street anymore.”

Target has a cult-like following, especially from those who grew up frequenting the store. “I’m from the suburbs, so Target is my safe haven,” Elbedeiwy said. “Target runs are such a fun activity to do with friends. It’s a whole outing,” Addie added.

The new Target may be enough to overthrow the Fordham community’s loyalty to Amazon, which grew stronger after the Amazon Lockers were installed near the Quinn Library in 2018. “I’m excited for Target to come to Columbus Circle. I certainly will be going there more than I’ll be using Amazon now,” Emily O’Brien, FCLC ’22 said.

O’Brien is a former representative for Target Tag, the company’s digital magazine, and she regards the company highly after working with them. “I think Target is one of the few corporations that not only cares about its customers, but also cares about its employees. Companies like Amazon may make my life easier, but Target makes shopping more enjoyable,” O’Brien said.

A brand new major retailer in the area also means new job opportunities. Haley van den Berg, a former FCLC student, also works for Target. “I started working for Target in high school and still come back to work during breaks and summers,” van den Berg said. “Between the company’s willingness to work with college students’ schedules and employee discounts on healthy food and other dorm essentials.”

When will we be blessed with the bullseye? Target’s Columbus Circle press release stated the store would open in 2019 but did not specify a date. The interior of the store is still under construction, but the completed exterior advertises, “Target coming soon” and “we’re hiring” with a link to the job application. The job postings include beauty consultant, tech consultant and Starbucks barista among others — meaning this small-format location will include a Starbucks, hopefully to replace the recently closed Columbus Circle Starbucks.

Whenever it opens, it is sure to have an immediate loyal following — and the potential for more than a few FCLC converts. “The new Target in Columbus Circle is a potential win-win for Fordham students.”