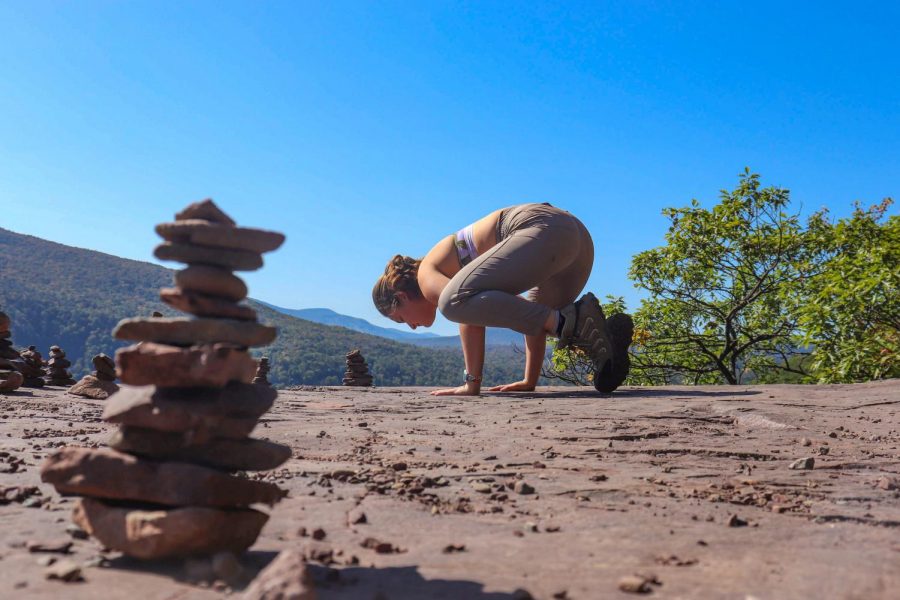 There were no entrances to swipe into, no buildings in sight. We helped new friends remove pine needles from oatmeal and spiders from ponytails. We threw enormous logs off cliffs and tiny pebbles into lakes. We laid in the road watching the Milky Way at night and drank our coffee amid birdsongs in the morning. Experiences like these are impossible at the Fordham Lincoln Center (FLC) campus, but they are now memories treasured by the two dozen students who attended the Environmental Club’s camping trip in the Catskills from Friday, Sept. 20 to Sunday, Sept. 22.

Former E-Board and club members discussed the potential for a camping trip for years, but the task of coordinating the trip with administrators, students and campsites proved overwhelming.

However, this September, a dream team of Environmental Club E-Board members; Student Involvement staff; student workers; and the Senior Director of the Office for Student Involvement, Dr. Dorothy Wenzel, finally did it. They successfully pulled off the trip after months of planning, with a few mishaps and no casualties.

It was worth it, too. Environmental Club Secretary, Aidan Donaghy, Fordham College at Lincoln Center (FCLC) ’22, admitted that although the trip organization was a lot of work, “it was a great bonding experience.” He also enjoyed working closely with Wenzel; Brittney Yue, FCLC ’20; and Kylie Ford, FCLC ’20.

In July, an email circulated to all incoming freshmen and all others on the club email list offering students the opportunity to sign up for the trip. The club was flooded with responses. The number of attendees expanded; a waiting list soon followed.

Wenzel was shocked at the amount of interest. She and other members of the planning committee felt it was important to give new students the opportunity to come on the trip, and many students joined the trip without knowing anyone at Fordham, including transfer student Julia Taylor, FCLC ’21. Taylor admitted that she had been apprehensive about living in the city and the “camping trip seemed like kind of a godsend.”

Matthias Lee Poy-Paxman, FCLC ’23, explained that for him, the trip was “a perfect way to meet people and to take a break and enjoy nature.”

Friday afternoon, Wenzel and 23 students took three Ram Vans 2 1/2 hours upstate to the wooded North-South Lake Campground in the Catskill Mountains. Upon arrival, the campers raced to set up tents, hang hammocks and build fires before sunset. For many, this trip was their first time sleeping in a tent overnight.

Immediately after unloading, there was a strong spirit of camaraderie and learning because, as Club President Yue remarked, “What better way to bond with fellow classmates than sharing late-night s’mores by a campfire, and cooking all your meals together after a great day in nature?”

Although breakfast-making got off to a slow start, Saturday was a full day for FLC campers. Most students chose to start the day with a tricky hike up to Kaaterskill Falls, New York’s highest waterfall, cascading down 231 ft. over two levels of rock formations. The students returned at the end of the day exhausted from a long day of hiking, climbing and kayaking.

Kathryn Hornyak, FCLC ’20, was part of the group that opted to hike throughout the second part of the day Saturday. “I’m capable of a lot more than I think. I was sick for a decent portion of last year and felt very weak, and doing that hike just reminded me that my body is capable of so much more than I give it credit for,” she said.

Many of the students felt similarly, surprising themselves with how capable they were and how therapeutic the fresh air felt as they ended Saturday infinitely closer, dirtier and more tired than they had been just 24 hours earlier.

Some students walked back down the mountain to kayak in North Lake, while others kept hiking through the rocky trails, pausing at the frequent outcroppings to admire the views, identify plant species and take dramatic photos. On the way, Lee Poy-Paxman and Arul Mollin, FCLC ’23, observed that the area was the “perfect place to start bear hunting training” and that although their bear finding “mission failed,” they have faith that next year they will be successful.

With an early Sunday morning Ram Van pickup looming, a small group of students woke up at 5:45 a.m. to hike in the dark to the site of the historic Catskill Mountain House and watch the sunrise. Although the hotel building itself has not stood on the site since its demolition in the 1960s, the students found the history and views of the site compelling.

As they watched the sunrise over the five states (New York, New Jersey, Connecticut, Vermont and Massachusetts) that stretched out below them, the students marveled over how timelessly surreal it felt compared to the frenetic energy in Manhattan. Camping novice Finley Peay, FCLC ’20, remarked that watching the day begin over the valley below “was a beautiful and peaceful way to end a lovely trip.”

The campers left the weekend feeling grateful for warm jackets, their new friends and the many people who put so much love and work into the trip, including Wenzel’s family, the facilities and OSI staff, and the team of four who organized and went on the trip. Wenzel’s favorite part of the trip? “Seeing new friendships get formed and existing friendships deepened.” Upon returning to the city, the group swiped onto campus closer than before.