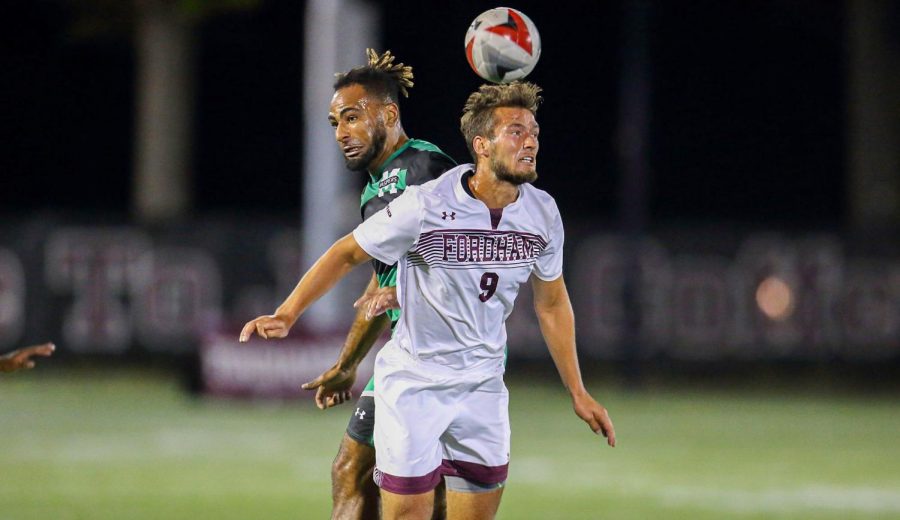 Johannes Pieles, Gabelli School of Business at Rose Hill (GSBRH) ’20, gets past a defender and attempts a header.

Fordham was just four seconds away from a scoreless draw on the night of Saturday, Sept. 28, when Luca Fava, Fordham College at Rose Hill (FCRH) ’21, rose above the rest and headed a perfectly placed corner kick from Bart Dziedzic, FCRH ’20, into the back of the St. Bonaventure net.

Despite the Bonnies going down to 10 men in the 47th minute and the Rams outshooting their opponents 27-8, it took until the final moments of double-overtime for the breakthrough goal. Fordham’s victory secured them a second consecutive victory in the Atlantic 10 (A10) conference.

The Rams came into the game fresh off of a 2-1 A10 victory over La Salle, as well as a 2-1 loss to Manhattan — both of which went into at least one overtime, a recurring trend for the team this season.

Fordham looked to maintain their momentum in their third consecutive home match before a series of four tough matches on the road. Their away record of 0-3-1 added pressure on the importance of Saturday night’s result in their pursuit of league supremacy.

Both sides had several scoring opportunities in the first half, with the Bonnies finding success down their left-hand side and the Rams coming close to scoring when a shot from Paul Makaj, FCRH ’22, hit the post. Joergen Oland, FCRH ’20, also saw his attempted bicycle kick saved.

Despite a few close calls, the half was characterized by poor decision-making in front of goal, and neither side could break the deadlock.

Fordham was given a major boost early in the second half when a last-ditch tackle from the St. Bonaventure goalie earned him a straight red card, leaving the Bonnies one man down for the conclusion of the match.

Kyle Cunningham, St. Bonaventure University (SBU) ’21, came on in goal for his first minutes of the season and managed seven impressive saves. The Rams held most of the possession and created more chances in the second half, including a diving header from Dziedzic that was only inches away from goal. St. Bonaventure kept their composure on defense and had opportunities of their own, with Fredrik Hansen, SBU ’21, forcing Konstantin Weis, Gabelli Graduate School of Business ’21, to make two excellent diving saves toward the end of regulation time.

Fordham continued to struggle with the final ball during overtime, and their play became increasingly desperate. Besides a crucial save from Weis at the beginning of the second overtime, all the action took place in front of St. Bonaventure’s goal, with Fordham players relentlessly pushing forward. With only a few seconds remaining, the Rams earned a corner kick and had to rush to have enough time to take it. Dziedzic’s corner kick was headed by Fava and hit the back of the net as the match came to a close. The referee blew the final whistle as the victorious Fordham players piled on top of the goal scorer, Fava, and the St. Bonaventure players stood on the field stunned.

These results put Fordham in excellent form as they look to continue their perfect start in the A10 against Rhode Island on Saturday, Oct. 5, at 7 p.m.