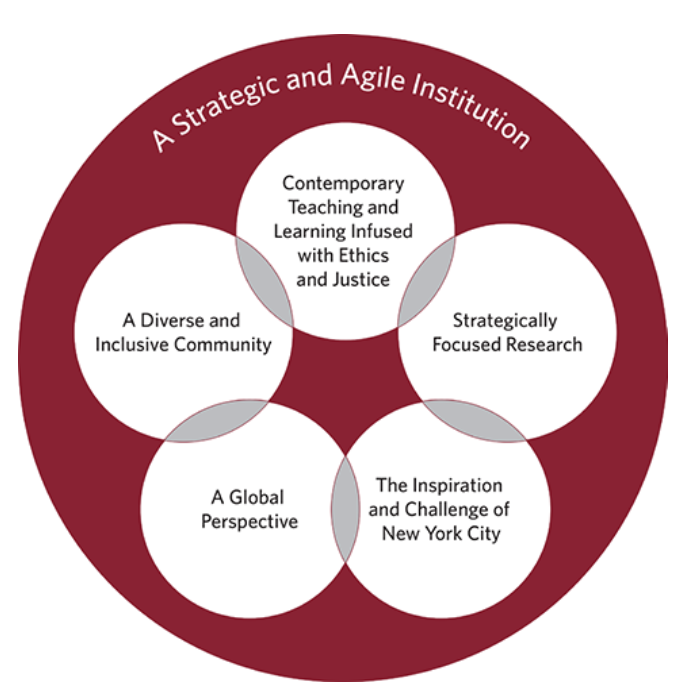 An infographic outlining CUSP's strategic initiatives for the foreseeable future.

Since its founding by University President Rev. Joseph M. McShane, S.J., in the fall of 2015, the Continuous University Strategic Planning Committee (CUSP) has been responsible for planning and executing initiatives to improve the school’s academics, community and legacy, with many of these initiatives planning as far ahead as 2030.

CUSP Co-Chair Dennis Jacobs, university provost and senior vice president for academic affairs, described how Fordham has both the opportunity and duty to successfully raise later generations in an ever-changing world.

“When we think of the graduates we’re going to produce 10 years from now, what is the world they’re going to enter into and how will Fordham prepare them to be real change agents in that world?” he said.

In fellow Co-Chair Peter Stace’s words, the ultimate goal of the CUSP Committee is to “foster a sense of strategic thinking across the institution, and formulate a set of priorities that would lead the institution forward.”

According to Stace and Jacobs, CUSP’s plan for educating future students revolves around six initiatives, each with its own team comprised of professors with relevant knowledge in their respective fields.

One such priority that is soon to come to Fordham will be the Learning Integration Technology Education (LITE), which according to Jacobs will be a new working space for faculty to “engage with technologies” such as virtual reality and 3D-printing. It will be installed in the basement of the Walsh Library at Rose Hill and is expected to open within the next six months, with a “satellite operation in Lincoln Center” to follow.

Various initiatives formed by CUSP have already gone into effect in several of Fordham’s schools, including a restructured Law School track aimed to improve law students’ connection to the rest of the university. A similar track is also being developed for Fordham’s Graduate School of Arts and Sciences.

Both Stace and Jacobs agree that communication will be paramount to CUSP’s success. Jacobs believes that all the “ingredients” are in place and that with the combined “strengths across the schools,” Fordham is as prepared as ever to educate future generations of Fordham students.

“No one component of the university is going to achieve something grand,” said Jacobs.

Both Stace and Jacobs acknowledged that CUSP’s vision of Fordham in the coming decades is bound to change as time goes on. To Jacobs, Fordham’s future success depends on our willingness to set and accomplish goals as a University community. “What can Fordham tackle,” Jacobs said, “if we put all our oars in the water and row in a direction? What is it that we can take on?”