Vine is the Pinnacle of American Art 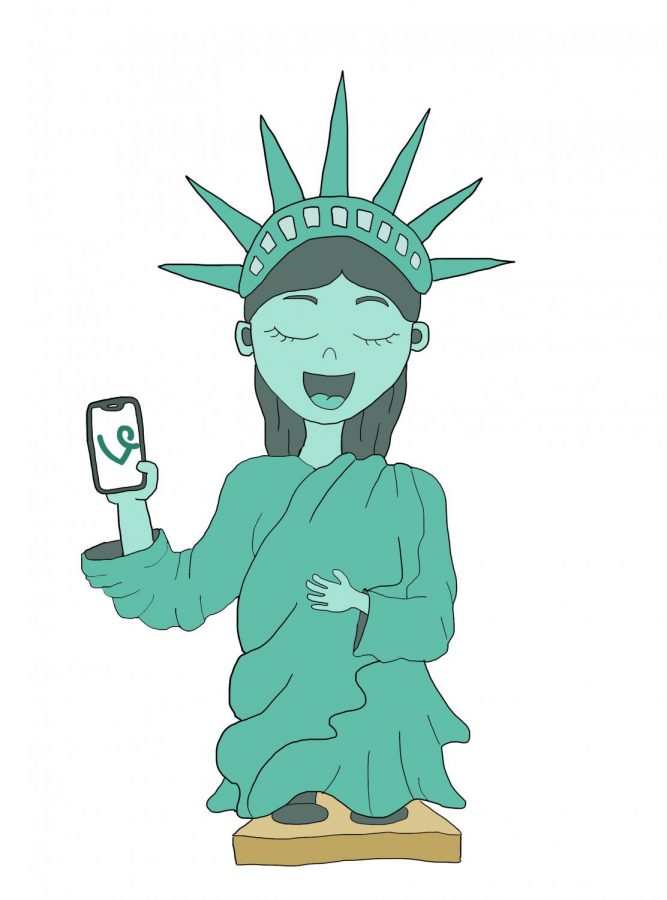 Move over, Lady Liberty. Vine is the new representative of American culture and art.

I sit on the precipice of my shoddy twin bed, itchy Walmart comforter clinging to my legs and disrupting my obligation to escape from my cocoon of comfort this early on a Monday morning. I sigh, fall back into my “hypoallergenic” joke of a bed and allow my lizard-brain to go both stupid and crazy.

Whipping out my iPhone 6 Plus, I expertly unlock the tiny computer with the panache of a Mountain Dew-powered hacker nerd from an underappreciated ’90s film that probably relies on some trope concerning the infiltration of the FBI database. My thumb commands the dancing pixels, conjuring the appearance of a tiny white and red icon under my finger. ’Ello, YouTube!

Although I have moved my arm, I haven’t yet blinked, the drowsiness of my occipital lobe preventing my eyes from resuming their usual reactivity. My trance-like, passive visage and tousled hair could pass for a cut scene of a psychopathic killer from an indie short film. I reveal no registry of emotion. I could give Margot Robbie a run for her money.

Tripping on my compromised autonomic nervous system’s attempt to coordinate movement, my disorganized fingers struggle to scribe the request: “Vines that mash my potatoes.”

“Dyspraxia?” I wonder, “in my body?” It’s more likely than you think.

My brain is still groggy from my slumber. I type “Vines thatdhn mash nmy potatoes.” But Google operates using complex multisystem algorithms and yields results for me anyway. She’s a friend who’s always in your corner.

The boy whips, then dabs, in a sinful rendition of a hip-hop song I’m sure I would never listen to of my own volition. The camera transitions, and now the boy is popping out from behind a shower curtain, his emergence on beat with the song’s chorus. His face could only be described as jeering, a forced overbite distorting his mouth while his pale ears stick purposefully out from his tightened hood. The atmosphere of the work has been established: youthful, nonsensical shenanigans in confluence with absurd, remixed clucking in a bizarre 6-second video.

Compounding the absurdity of the boy’s appearance with the hypnotic rhythm of the pop beat, I am already torn between my own comprehension of the scene. I want to attribute the peculiar comportment of the boy to mischief, spontaneity and chaos but that analysis is inhibited by the organized nature of the regularly occurring pop beat. Already my brain struggles to conclusively interpret the piece. The intermittent dabbing and whipping of the video’s subject clarifies nothing. My cerebrum hangs in suspension.

What does this video even mean?

The dichotomy between the two main themes of the video is unabashedly evident, yet unable to be qualified. I am experiencing primitive childlike humor, catchy tunes and obscure rage-inducing pop culture references all in one medium. The Vine ends, but my sharp breath and faint smirk continue. I am still giggling from the pure absurdity, no, felicity, of the video I just watched.

I wonder, briefly, about the history of art and entertainment. When polo-wearing 40-year-olds drag their popsicle-stained children to the Smithsonian, what do they even take from the experience? Do their bodies shiver with frissons of delight as they observe bizarre, instantly-shareable clips of people mimicking dance moves or spouting popular catch phrases in tones so comical that one can only dissolve into laughter? What is interactive about oil paintings? Do they define pop culture and inform the vernacular of middle-schoolers? How does Michelangelo’s David define or dominate social media for weeks on end? Is a seven-second clip of La Tour Eiffel capable of sending neurochemical acetylcholine coursing through my bloodstream to keep me alert and awake?

After watching a few more Vines, I feel awake enough to move. No longer stumbling horizontally, I tear my covers from my bed and stretch, my phone still in my hand as I extend my right arm toward the ceiling in a pose that almost appears victorious. Vine made itself accessible, confounded me enough to make me laugh and shocked my brain into awake-mode. Forget Margot Robbie, I think to myself. I could give the Statue of Liberty a run for her money, the brightness of the Vines still playing on the phone in my outstretched hand, glowing like an indestructible torch against the dismal early morning darkness.