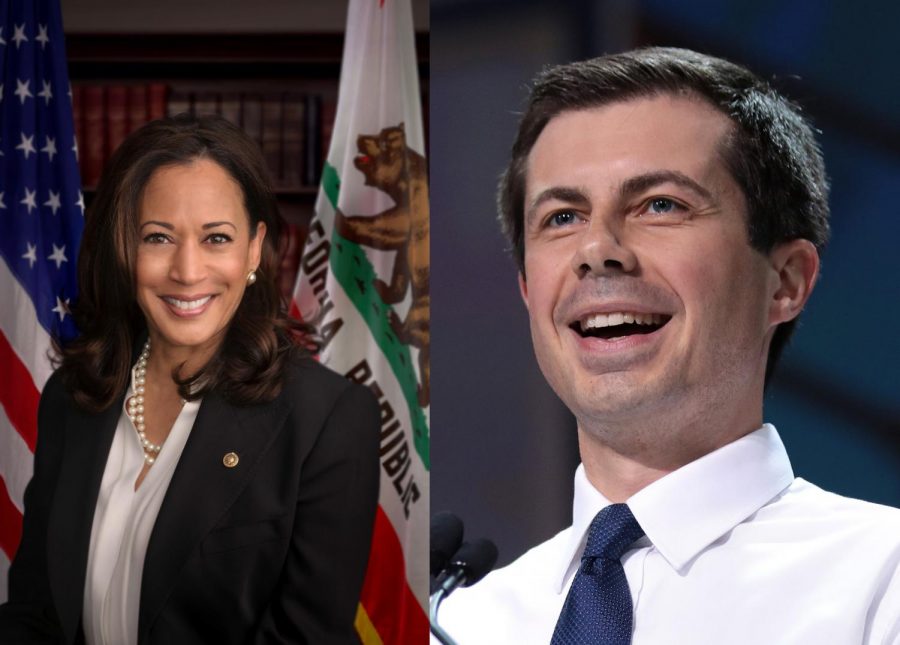 Senator Kamala Harris (left) and Mayor Pete Buttigieg (right) have both suffered in the polls as of late.

The 2020 Democratic presidential primary has been proceeding largely as one would expect. Former Vice President Joe Biden, Sen. Bernie Sanders and Sen. Elizabeth Warren are still the top three candidates according to polling, and the primary has been more about deciding the future direction of the Democratic Party than the pervasive policy and ethical dumpster fires of the Trump presidency.

However, if one looks a little bit beneath the surface, they will notice some shifting political fault lines that have considerably affected two key candidates in the race: Californian senator Kamala Harris and South Bend, Indiana, Mayor Pete Buttigieg.

Both Harris and Buttigieg started remarkably strong out of the gate during the winter and spring of 2019. Yet as the temperatures outside started to heat up, their campaign momentum started to cool down.

For two seemingly strong candidates, this “summer slump” is rather jarring. Is this an aberration, or will Harris and/or Buttigieg be able to propel themselves forward in the polls? Does this also mean that the race is essentially a three-way race among Biden, Sanders and Warren?

Harris received plenty of favorable media coverage when she started her campaign. She was seen originally as a potential compromise candidate between the moderate and progressive wings of the party and has had a respected record in the U.S. Senate. In a much-talked-about moment during the first Democratic primary debate over the summer, she criticized Biden for his record on busing in the 1970s.

However, she started to descend in the polls soon afterward. While her performance in the most recent debate in Houston, Texas, was not especially impressive, that obviously does not explain why interest in her candidacy among the Democratic electorate seems to be waning. It seems likely that she is having trouble appealing to voters because of her increasing tendency to equivocate on the details of her actual policies. Such equivocation is likely intended to placate the party’s progressive wing without scaring off the moderates, yet it fails to fully satisfy either.

For example, she no longer supports Bernie Sanders’ plan to abolish private health insurance with “Medicare for All,” despite having signed on as a co-sponsor to his bill in the Senate. Harris has also been criticized by both moderates and progressives for saying she “would consider” or is “thinking about” more progressive policies.

This misguided strategy assumes that there is a group in the Democratic Party that would be more receptive to equivocation than an unabashedly centrist candidate like Biden or an unabashedly progressive one like Sanders or Warren. However, the lack of clarity in her campaign on some of her stances disappoints many Democrats because it is hard to understand many of her exact positions, and she comes off as less genuine to many voters in the process.

Buttigieg’s campaign received extraordinary buzz in the spring of 2019. As a millennial, mayor, Rhodes Scholar and veteran, he has an astoundingly unique and impressive life story despite being under 40 years old. He is also the first openly LGBTQ presidential candidate in U.S. history. Buttigieg was praised by many political pundits as remarkably detail-oriented and articulate when he spoke on the campaign trail.

While his positions are more liberal than those of Biden, especially on structural reform issues, he aligns more closely with moderates than true-blue progressives. However, Buttigieg’s campaign has had severe difficulty reaching out to African American and Hispanic voters. Currently, he is polling extremely low with those demographics, which is immeasurably problematic for winning the primary, considering the diversity of the Democratic electorate today.

A tragically all-too-common police shooting in his hometown of South Bend over the summer certainly didn’t help matters, but Buttigieg’s problem with voters of color has lasted longer and runs deeper than that incident alone. While Buttigieg will likely continue to get favorable coverage by many mainstream media outlets, it is unlikely that he will get as intensely positive and focused coverage as the “media honeymoon” period he had in the late spring and early summer.

Kamala Harris and Pete Buttigieg’s “summer slumps” are very different. However, the current three front-runners for the Democratic nomination have all experienced some similar difficulties. At this time, I don’t believe that either Harris or Buttigieg has a very clear chance of winning the nomination, but through their struggles, the blueprint for a 2020 Democratic primary win is becoming more clear. Hopefuls must be clear and genuine when discussing their policies and views, and they must also focus on building a highly diverse and pluralist coalition.